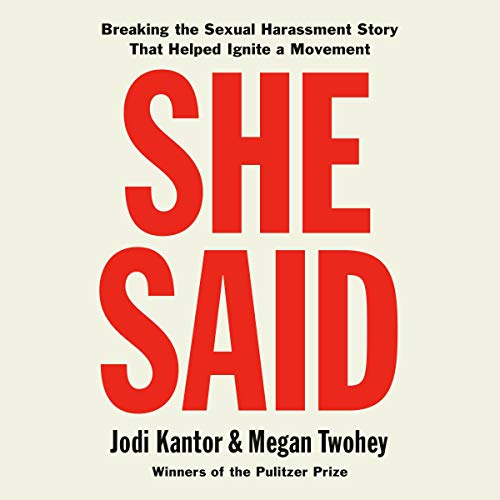 From the Pulitzer Prize-winning reporters who broke the news of Harvey Weinstein's sexual harassment and abuse for the New York Times, Jodi Kantor and Megan Twohey, the thrilling untold story of their investigation and its consequences for the #MeToo movement

On October 5, 2017, the New York Times published an article by Jodi Kantor and Megan Twohey - and then the world changed. For months, Kantor and Twohey had been having confidential discussions with top actresses, former Weinstein employees, and other sources, learning of disturbing long-buried allegations, some of which had been covered up by onerous legal settlements. The journalists meticulously picked their way through a web of decades-old secret payouts and nondisclosure agreements, pressed some of the most famous women in the world - and some unknown ones - to risk going on the record, and faced down Weinstein, his team of high-priced defenders, and even his private investigators.

But nothing could have prepared them for what followed the publication of their Weinstein story. Within days, a veritable Pandora's box of sexual harassment and abuse was opened, and women who had suffered in silence for generations began coming forward, trusting that the world would understand their stories. Over the next 12 months, hundreds of men from every walk of life and industry would be outed for mistreating their colleagues. But did too much change - or not enough? Those questions plunged the two journalists into a new phase of reporting and some of their most startling findings yet.

With superlative detail, insight, and journalistic expertise, Kantor and Twohey take us for the first time into the very heart of this social shift, reliving in real time what it took to get the story and giving an up-close portrait of the forces that hindered and spurred change. They describe the surprising journeys of those who spoke up - for the sake of other women, for future generations, and for themselves - and so changed us all.

Includes a bonus PDF of the notes from the book.

“A binge-read of a book, propelled, for the most part, by a clear, adrenaline-spiking ticktock of how their stories came together, and studded with all manner of new astonishing details.... This is Kantor and Twohey’s story and one everyone should read for a panoply of reasons. By simply recounting their reporting, the two offer a masterful explanation of how a man like Weinstein is allowed to abuse his power and many women for so long in something approaching plain sight.... In many ways, 'She Said' is more significant than 'All the President’s Men,' and not just because journalism is currently under siege, financially and politically, in a way it was not in the 1970s. There was a finite number of people responsible for the crimes of the Nixon administration; the alleged crimes of Harvey Weinstein are also the crimes of our culture, and they continue to be committed every day by many men all around the world. Although now, one hopes, without as much silence, secrecy and cultural complacency.” (Los Angeles Times Review)

“'She Said,' a new book detailing the astonishing behind-the-scenes of the New York Times’s bombshell Harvey Weinstein exposé, is an instant classic of investigative journalism. If your jaw dropped at the newspaper’s original allegations against the predatory movie mogul, prepare for it to hit the floor as authors Jodi Kantor and Megan Twohey recount how they uncovered the story: secret meetings, harrowing phone calls, private text exchanges with A-list actresses agonizing over whether to go on the record. Ashley Judd plays the stoic warrior; Gwyneth Paltrow, the circumspect liaison who tries to help the reporters find other sources.” (Monica Hesse, The Washington Post)

“She Said, the journalists’ clear-eyed record of that effort, reads at some moments as a thriller, and at others as an indictment of a system full of rot. But it is ultimately about the women, bonded in their pain, who refused to be silent any longer.” (The Atlantic)

All The Presidents Men for the 21st century. This book is a masterpiece of investigative journalism.

“She Said” takes us on a narrative journey through a series of remarkable feats of reporting, which collectively helped to shift the public dialogue in fundamental ways. Furthermore, She Said reads like a thriller!

Great until the Kavanaugh tangent

I would have given this 5 stars except I couldn't understand why it took such a jolting turn and went off on the Kavanaugh tangent. Up until then I was hooked, but I thought I was suddenly listening to an entirely new book. It should have been saved for another day. Better to have further explored Weinstein and the powerless he preyed upon, especially digging more into how he was able to hide in plain sight in an industry that is under such constant media scrutiny. I would have liked to have read about how Weinstein worked film journalists, which he was a master of, as well as agents and how that may have delayed his day of reckoning. How does such an open secret survive in the industry, and will Hollywood really change or revert back to the way it was after paying #MeToo lip service?

Yes, these two were hot on the trail of a good story, but the two reporters also understood the sensitivity of this issue all around. Admitting to being a victim isn't easy at all, especially for powerful women in the movie-making business. Kantor and Twohey understood this, and pushed them JUST the right amount to get the story out. As is true of most good journalism, there is fear and foreboding the day, the hour, the minute before a major story is published, but almost immediately, there is an explosion of response. When the truth is aired, all parties (except the guilty one) breathe easier. I admire the two women immensely for telling the story of a sexual predator who degraded and assaulted women without thought, but I also give my kudos to the New York Times for allowing them latitude in reporting, and for giving them the time and resources to go after the story. As a lifelong journalist, I know of the constant push for copy to fill the website and the print product. This book gives the back story for how to be a journalist. Yes, it's full of details of this horrid story, but more than that, it's a textbook for investigative reporting. Thank you for your work, Jodi and Megan.

A must read or listen

This is a thriller, an analysis, an expose and an a vital read today as journalist are under attack. Don’t think you know this story, or you don’t want to read something lurid about creepy men. This is, to paraphrase the book, a story about how we have nothing to fear when we have facts and the rule of law behind us. So yes, it’s also a cautionary tale these days. Narration is clear and the narrative is never boring.

Gets too bogged down in the details at times but tells the story of the Harvey Weinstein investigation quite well as well as touching on Trump, Cosby, and several others. It was particularly a good point that if they were able to get a few women to go "on the record" and they were able to get the story out it would bring an avalanche of other women saying "me too;" this was exactly what happened to the longtime serial abuser. It also pulled back the cloak of attorney's Gloria Allred and Lisa Bloom who have made a killing protecting men like Bill O'Reilly, by crafting non disclosure agreements that protected the abusers and muzzled the abused. This is the story that brings hope to women by chronicling the number of powerful men who finally had to pay the price. It also points out how far is left to go with Donald Trump in the White House and Brett Kavanaugh on the Supreme Court.

Must read story behind the story

I read this right after Ronan Farrow’s “Catch and Kill” and wasn’t sure how it could compare to what I also thought was a great book. I couldn’t have been more wrong. It covers some similar topics but with more of an eye to the role lawyers have played in protecting powerful men for decades and throughout the “Me Too” movement. The story itself was a good read, but nothing was better than the epilogue, a group interview with many of the women who have become the face of “Me Too.” It takes you away from just reading a story of what these women went through and gives you real perspective into what it was like to come forward and, more importantly, the aftermath.

But I had no idea. Jodi & Megan do an amazing job of taking the reader in a journey through the process of getting the whole Weinstein story from the brave women who came forward. Could not stop listening.

enlightening! I didn't realize the depth!

what these women went through is true Lee horrific and The Bravery it took to come forward is amazing. And Lisa Bloom? i hope Justice comes to you....Rose McGowan was in her early 20's? and you helped try to destroy her....terrible!

indispensable to understand why time MUST be UP !

This book is indispensable to understand the complexity of a culture of sexual harassment, how it is perpetuated, why it must be broken, and how.

Kantor and Twohey did a great and important work of investigative journalism, which was rewarded with a Pulitzer prize. "She said" explains how of this investigative work was processed and shaped, with a great focus on the women who had the courage to speak up.

The sensitive and careful story-telling shows respect to these brave women, their stories, and their struggles - their *lives*. It perfectly balances the empathy of the authors' for these women and the mandatory detached/professional approach which is the cornerstone of unimpeachable journalistic work.

The book has very much its own "voice" (perfectly rendered by Lowman) and I found myself captivated until the climatic ending. I finished this book with a deep respect for Kantor and Twohey and most of all great empathy with and gratitude to the women who spoke up.