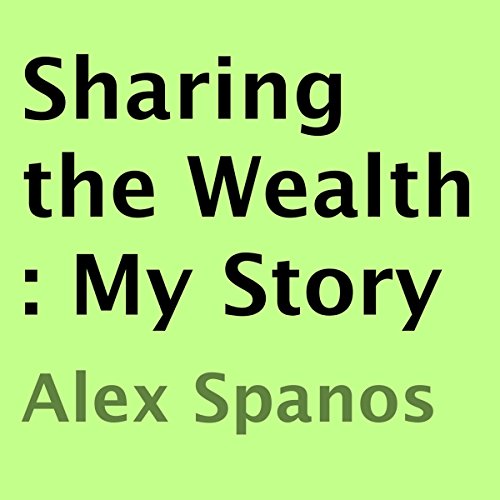 Sharing the Wealth is the incredible true story of how a $40 a week baker became a multi-millionaire owner of a Super Bowl NFL team and an unprecedented philanthropist. The road Alex Spanos took to riches was not a common one. Without the advantages of money, background, education, or connections, Spanos relied on his own heart and determination to achieve success.

Spanos recounts how his first gamble was his hardest and most important. As a husband and father of one child, with a second on the way, Spanos was barely making ends meet working in his father's bakery. When his father refused to give him a raise to equal the going rate for bakers, he walked out, vowing never to return to his father's employ. His first venture, selling bologna sandwiches to migrant workers, was earning $700,000 annually just five years after he left the bakery. He ultimately made his fortune in the construction business, becoming the #1 builder of apartments in America.

Sharing the Wealth also shares the personal side of Alex Spanos. He struck lasting friendships with such celebrities as Bob Hope and Telly Savalas. He was given the key to the city of San Francisco, he provided relief funds after floods ravaged Northern California, and assisted with humanitarian aid when an earthquake struck Greece. Whenever a need arose, Alex Spanos was there to help. Finally, Spanos shares his odyssey of first buying an NFL team, and then ultimately reaching the Super Bowl.

ITS NOT OVER . We can still win. Stockton California in the house . Awesome book. Encouraging

Must read for the ghetto ghettos of Stockton

Alex Spanos the heart and spirit of Stockton than you, I have a new outlook on life.