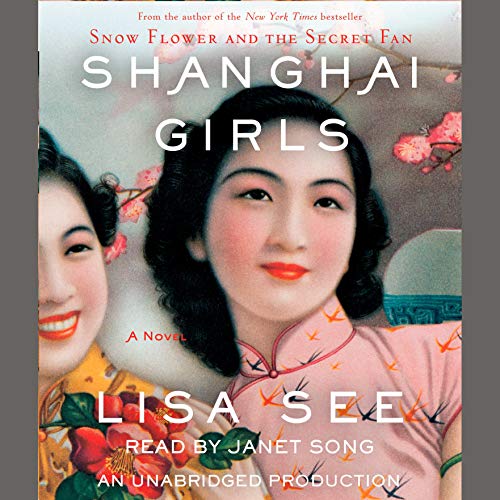 In 1937, Shanghai is the Paris of Asia, a city of great wealth and glamour, the home of millionaires and beggars, gangsters and gamblers, patriots and revolutionaries, artists and warlords. Thanks to the financial security and material comforts provided by their father’s prosperous rickshaw business, 21-year-old Pearl Chin and her younger sister, May, are having the time of their lives. Though both sisters wave off authority and tradition, they couldn’t be more different: Pearl is a dragon sign, strong and stubborn, while May is a true sheep, adorable and placid. Both are beautiful, modern, and carefree...until the day their father tells them he has gambled away their wealth and that in order to repay his debts, he must sell the girls as wives to suitors who have traveled from California to find Chinese brides.

As Japanese bombs fall on their beloved city, Pearl and May set out on the journey of a lifetime, one that will take them through the Chinese countryside, in and out of the clutch of brutal soldiers, and across the Pacific to the shores of America.

In Los Angeles, they begin a fresh chapter, trying to find love with the strangers they have married, brushing against the seduction of Hollywood, and striving to embrace American life even as they fight against discrimination, brave communist witch hunts, and find themselves hemmed in by Chinatown’s old ways and rules.

At its heart, Shanghai Girls is a story of sisters: Pearl and May are inseparable best friends who share hopes, dreams, and a deep connection, but like sisters everywhere, they also harbor petty jealousies and rivalries. They love each other, but each knows exactly where to drive the knife to hurt the other the most.

Along the way, they face terrible sacrifices, make impossible choices, and confront a devastating, life-changing secret, but through it all the two heroines of this astounding new novel hold fast to who they are: Shanghai girls.

“A buoyant and lustrous paean to the bonds of sisterhood.” (Booklist)

“A rich work...as compulsively readable as it is an enlightening journey.” (Denver Post)

"A buoyant and lustrous paean to the bonds of sisterhood." (Booklist)

“See is a gifted writer, and in Shanghai Girls she again explores the bonds of sisterhood while powerfully evoking the often nightmarish American immigrant experience.” (USA Today)

“A rich work... as compulsively readable as it is an enlightening journey.” (Denver Post)

Pleasant story for a casual listen. Little flat at times but other than that, wonderful character development of the girls. Just finished this book and already downloaded the sequel. Well-played, Lisa See. You have me hooked!

This is my first Lisa See book. Now normally I tend to stay away from sad books about the trials and tribulations of life, but this one was so rich in detail that I was wrapped up in the story before I realized it was sad -- by then it was too late to put the book down.
I loved her characters who grow as the story progresses. The story is beautiful, touching, and a complex portrait of different kinds of love -- between sisters, between parents and their children, between husband and wives, and the complex feelings they have of their native and adopted countries.
The prominent figures are two girls who grew up in Shanghai just before World War II, and how they came to be in America after their world fell apart. It is a story of how they suffered many hardships, as told from the viewpoint of the elder sister. As the story progresses, the contrast between the sisters grow. They have conflicts, but resolve them because they are sisters who love each other.
For those who are constantly burdened with family responsibilities, this story could almost be a fable, a lesson in how ones viewpoint or attitude could change and color how one perceives and reacts to life's little blessings.
I give this book a high rating because I learnt something about relationships, and it was enjoyable even though it was primarily a tale of hardships. The story was never tedious, and, in the end, I wish the story went further than it did.

My introduction to this author was Snowflower and the Secret Fan, which I loved, and I think I enjoyed this one even better. The setting, 1937-1957, is an historical context that I am more familiar with, which may have made the main characters more relatable. Viewing the atrocities of the war years and the transition to the 1950's through the eyes of the Chinese immigrants offered a new perspective to the immigration experience and the communist witch hunts which has typically been told as a Russian Cold War. The ending obviously carries the story to a sequel, which I have already downloaded to continue the journey. I love Janet Song's reading - she brings the characters to life for me.

An abrupt ending right in the middle of a major event in the story. it was just interesting enough to keep listening but the story dragged for me.

Good story, reader lacks expression and excitement in her voice most of the time. I would still recommend.

Shanghai Girls is the story of two sisters Pearl and May starting out in 1930’s Shanghai China. It takes you on a journey of war, family, betrayal, obligation and relationships. The girls’ father, loses his daughters in a gambling debt and sells them into arranged marriages with American husbands. Plagued by war, separation, rape, torture and the birth of a child, the author Lisa See, explores the strengths and weaknesses of these two sisters as she pushes them to their limits. Their struggle with secrets, racism and fitting into a new world, all play important roles to create the backdrop and develop the personalities of the two protagonists. The sisters’ relationship is complex and entwined in loyalty, jealousy and different perceptions. Lisa See paints a very hard life for these two women who endure tragedy after tragedy. She manages to capture how their circumstance bonds Pearl and May and pulls them apart at the same time.
Rich in culture, this book delves into everything from bound feet and rickshaws to Chinese cooking and fashion. The many Chinese idioms throughout adds authenticity. I am glad I read this book with the intentions of reading the squeal, Dreams of Joy. The book ends abruptly. The ending leaves you hanging. Had I read this book a few years ago with no where to find answers, the ending would have disappointed me. Fortunately, I have just started Dreams of Joy.
The reader does a very good job narrating the book. I was glad it was the same reader for the sequel as it give continuity to the story.

For all the lovers of Amy Tan, Lisa See is another great author not to be missed. She is able to paint a picture so clear that I am able to see the world of the Shanghai Girls as if it were my life. Do not believe any one who knocks Janet Song's performance. She has a wonderfully calming voice layered with the knowledge of what it means to be asian american. Her voice captures the struggle of the characters but never gives into it; just as the characters don't let the events of the story defeat them. This book is not to be missed and I hope you take the leap and listen to it like I did.

I loved this book. I've read See's "Snow Flower" and "Peony in Love" and this is by far my favorite. It does appear that it is being set up for a sequel, so don't expect the story to have a real ending. There is a lot in the story that is hard to take. Because the characters go through a lot in the story, we as readers do to.

The story is mainly about the relationship between two sisters, with the back drop of war in China and then China Town in Los Angeles in the late 30's, 40's, and 50's. Lisa See often deals with the theme of how perception shapes your world and actions, and "Shanghai" is no exception.

I loved the story and the lessons presented. Don't miss this one!

An historical-fiction novel about two sisters' difficult lives in China during the 1930s and the hardships they endured once they came to the United Staes. The racial injustices they and their families received in California during the 1940s and beyond was disturbing.

The story line of paper sons was one with which I was unfamiliar, and although it was somewhat informative, I didn't care for the story around it. It was long and drawn out, and not very uplifting.