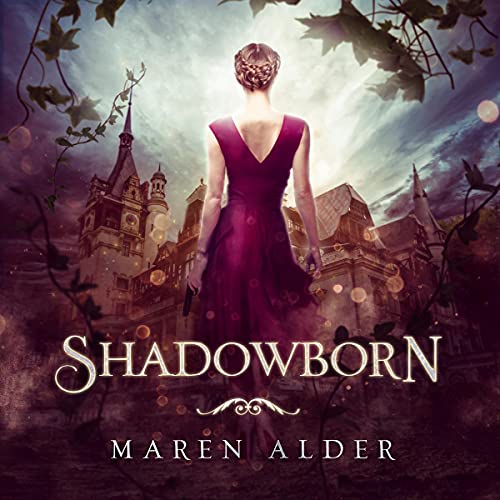 "The tire had gone flat and the chain now dragged on the ground somewhere next to my soul..."

With these words, the listener is introduced to Teylin Walker, a runaway swept into the criminal underworld of the Coterie. After encountering a mysterious boy with inexplicable abilities, Tey finds herself abducted from the streets of LA and smuggled to the mysterious island nation of Los Sueños. The island's inhabitants struggle to survive in a land where dreams and reality walk a thin line across a jungle-covered landscape. Amongst the radioactive silver pools, and rotting mansions of the archipelago's past, are children dubbed "Shadowborn” who possess mystical powers wanted by crooks and bounty hunters alike.

Desperate to escape, Tey searches for clues that bring her closer to the truth of her island prison. But when she rescues an injured Shadowborn boy from the abuse of a cruel master, she is forced to choose between her own freedom and the lives of those she has come to love.

In this thrilling debut, Maren Alder sweeps her listeners into an utterly gripping world and takes them on an exhilarating ride that will leave them gasping for more. Shadowborn, by Maren Alder, is an excellent science fantasy adventure novel. I loved everything about this audiobook, especially the diverse cast of characters and the brilliantly developed setting and plot. Los Sueños, an island nation entrenched in mystery, created an exotic paradise for this listener as I explored the author's creative landscape. This archipelago transported me to a new world with a little bit of everything: different cultures, underground markets, cutthroat bounty hunters, a failing monarchy, and the mystical Shadowborn. Each element played into the plot's complexity and gave the story a level of depth that kept me fully engaged and eager to discover the elusive truths.

Looking forward to book 2. I want to know more about the adventure. Totally had a feeling about Rob.

This was a fresh new experience for me from a new author. Sometimes you go out on a limb to try something you've never heard of and this didn't disappoint. From the first chapter it sucks you in to this wild mystery that had many twists throughout. The way it's written it has you trying to guess what's going to happen next. This definitely had Sanderson world building elements to me and yet had a distinct feel, almost reminded me of the clockwork prince book series but without all love triangle drama. There is some romance but it was a minor touch to a story that is mostly mystery, action, and deception. It was a little darker than I originally thought it was going to be but in all the best ways. I was definitely left wanting more by the end, and you can tell Maren is setting us up for quite the ride moving forward, if this wasn't already a thrill! Great job Maren, absolutely loved this and can't wait for the next book to drop!

It's been a long time since I've enjoyed a story this much. Multifaceted, richly layered & rampantly enjoyable!!

I couldn't recommend this book enough. You find yourself forgetting the time and just enjoying a fresh new story full of mystery, love, and suspense. Cannot wait for following books. I'm a fan for life!

This book was superb! I got lost in a world that was both real and mystical, anxiously waiting for the next chapter. This is an amazing story full of imagery and suspense. I thoroughly enjoyed the characters and surprising twists and a creative unfolding of mystery. Can’t wait to read more from Maren !

Everything you want from a YA novel

Such a fun, fast paced, action-packed ride with great characters, great story, and lots of twists and turns along the way. Easy 10/10 for me!

Tey is a normal teenage girl who has had some rotten luck, and things only get worse when she runs into some shady people on the street. She’s ultimately kidnapped and brought to a mysterious island where, without spoiling anything, some pretty crazy stuff goes down.

There’s never a dull moment in this book. There is wonderfully written action and romance, sure, but the heart of this book is the mystery surrounding the Shadowborn, children on the island with silver hair that have imaginative and dangerous powers. Why are these children here? What are the secrets of the islands? What is the monarchy hiding and why do they want the Shadowborn executed? So many great questions that really push you to keep reading.

Overall, this is an excellent book worth every penny, and a promising debut for author Maren Alder.

I read books all of the time, and it's rare to find something that is both original and entertaining- this book is both!

The main character is incredibly relatable, and man does she have a backbone! I love strong female protagonists, and absolutely love Tey. I want to be her, but I also want to be her friend.

The magic system is something I've never seen before, and the world the author builds is completely unique. I'm interested to see what the author does with this world in future books- there's a lot of potential here.

And the ending! Oh the ending... I totally didn't see that coming. More please!!!

Captivating from beginning to end

This book jumps straight into its story and takes the audience on a suspenseful and wonderful visual journey that doesn’t get bogged down in too many details. A page turner - if an audiobook can be one. There were only a few microphone bumps in the recording, but the performance of the reading was solid and I was able to immerse myself in the colorful world Maren Alder created.