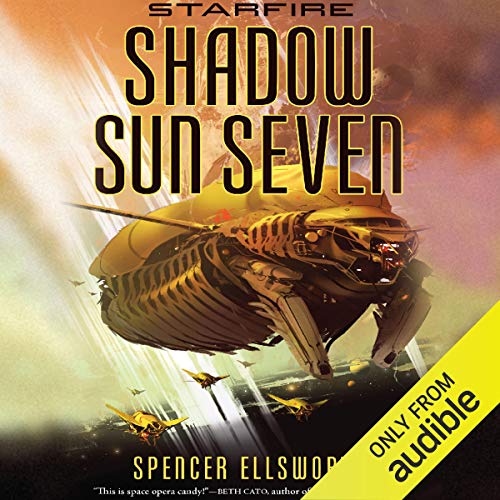 Jaqi, Araskar, and Z are on the run from everyone - the Resistance, the remnants of the Empire, the cyborg Suits, and right now from the Matakas - and the Matakas are the most pressing concern because the insectoid aliens have the drop on them. The Resistance has a big reward out for Araskar and the human children he and Jaqi are protecting.

But Araskar has something to offer the mercenary aliens. He knows how to get to a huge supply of pure oxygen cells, something in short supply in the formerly human Empire, and that might be enough to buy their freedom. Araskar knows where it is, and Jaqi can take them there. With the Matakas as troops, they break into Shadow Sun Seven, on the edge of the Dark Zone.

Loved the characters in this book. Especially Jackie. The two sided narrative was very well done. Can’t wait to hear the next audiobook!

Leaves you satisfied & yearning for more

An incredible follow-up to A Red Peace. Further develops the mythology of the Starfire. Is a space adventure through and through, packed with action sequences that will get your heart racing. Introduces new loveable characters while further developing the ones you got to know in the first book. The dual narration between both main characters continues to drive the story. The meat of the story appears to be a "side quest" of sorts, yet it furthers the overall plot every step of the way. This is a second installment that does not pull any punches, does not disappoint, and exceeds the excitement of the first.

In regards to the reading, both voice actors continue their phenomenal performances. It does not go unnoticed at both narrators care deeply about the material, and they work hard to make sure it is communicated to the listener correctly.

Lastly, Shadow Sun Seven leaves you with a cliffhanger ending that makes me SO GLAD the next installment is already out. If it weren't 3 in the morning I would start listening now.

It's pretty common for the second book of the trilogy to be a little weaker, with some filler and side quests to get the characters (and the readers) to book three. Not so in this case. While Shadow Sun Seven does see the protagonists go on a side quest, of sorts, the book never really loses focus on the main story line and the side quest advances it nicely. The author also introduces a great new hero, and en entertaining new villain. And the ending makes me quite excited to pick up book 3.