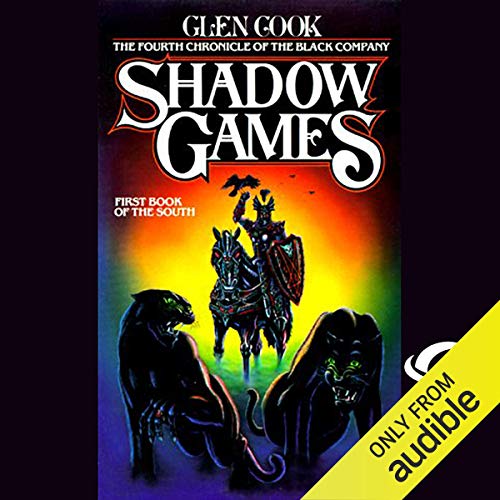 After the devastating battle at the Tower of Charm, Croaker leads the greatly diminished Black Company south, in search of the lost Annals. The Annals will be returned to Khatovar, 8,000 miles away, a city that may exists only in legend...the origin of the first Free Companies.

Every step of the way, the Company is hounded by shadowy figured and carrion-eating crows. As they march every southward, through bug infested jungle; rivers dense with bloodthirsty pirates; and cities, dead and living, haunted by the passage of the Company north, their numbers grow until they are thousands strong. But always they are watched by the Shadowmasters, a deadly new enemy. They are twisted creatures that deal in darkness and death, powerful, shadowy creatures bent on smothering the world in their foul embrace.

This is the first round in a deadly game, a game that the Black Company cannot hope to win.

I've been listening to a few audio books lately that while were good always felt like a bit of work to get through, that was not the case with Shadow Games.

First off let me say you really don't want to start your Black Company experience here. While Cook does a very good job of allowing this book to be an intro to the series it really will shine in it's proper place as #4.

Following Croaker from book 1 to now you really get a great feel for the guy and are either really interested in his journey or have given up before now. This books picks up right from 3 and does a good job of answering a lot of lingering questions you may have had.

It has as much action as the previous books and brings back enough of the past characters to keep you attached to the events while also adding in enough new gems to keeps things fresh.

Don't get me wrong there book is not perfect. My main gripe relates to the mystery surrounding the villains. It makes some sense but it also is annoying that Cook couldn't come up with better.

Vietor does a great job as always of voicing Croaker and I always felt his performance fit. I have more to add but I want to avoid spoilers even the most obvious ones.

All in all this is a fun read and if you are into the Black Company or this kind of military fantasy style you would really enjoy it.

This book yields new life to this series. It draws one back to this story with a vengeance and it is totally worth listening to.

The initial Black Company trilogy is a masterpiece. This fourth book just doesn't have the same feel. Narrator is great as always.

Love this book, liked the reader no complaints

great series, wish they would compile it. Its too expensive separately. But this series is about number 4 on my all time favs list and ive read about 100 different fantasy series. So thats my endorsement. Amazing book, narrator did a good job.

Could not put the damn thing down....addicting. I truly actually care how this saga coalesces, some inventive military strategy, and badgering wizards, subtle love plot, and realistic dialogs "sometimes" worth every minute and penny.

Shadow Games for sure

Croaker's in charge of the Black Company on a path south to Khatovar. Down to a company of seven, it recruits along the way introducing us to a few new characters. One-Eye and Goblin have to be at the top of their game with their wizardry skills, while adding comedic relief to the story. The Lady is still adjusting to the loss of her powers, but seems to have a hidden agenda with new allies. Lots of mystery surrounding the Shadowmasters, crows and a shadowy figure following Croaker. It all leads up to a bloody battle and a heck of a cliffhanger.

If you're at this point in the black company series's you know as well as I do that things are getting a little strange. The narrator for the series is so fantastic but this story is getting a little sideways.

The company is headed home!

Back to khatovar they go. But will they make it? Will the lady lure them into a tower trap? Will she join them? Will she and croaker....will goblin and one eye be enough to get them there? Will the company grow? Will it just be a handful
On a hopeless quest? How far can the annals take them with so much lost? All this and more my fellow company fans all this and more