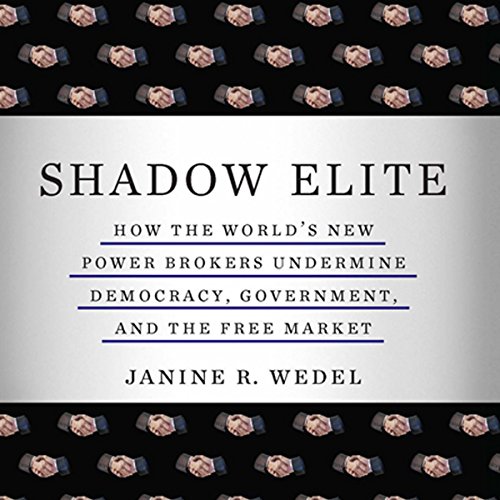 It can feel like were swimming in a sea of corruption. It's unclear who exactly is in charge and what role they play. The same influential people seem to reappear time after time in different professional guises, pressing their own agendas in one venue after another. According to award-winning public-policy scholar and anthropologist Janine Wedel, these are the powerful shadow elite, the main players in a vexing new system of power and influence.

In this groundbreaking book, Wedel charts how this shadow elite, loyal only to their own, challenge both government rules of accountability and business codes of competition to accomplish their own goals. From the Harvard economists who helped privatize post-Soviet Russia and the neoconservatives who have helped privatize American foreign policy (culminating with the debacle that is Iraq) to the many private players who daily make public decisions without public input, these manipulators both grace the front pages and operate behind the scenes. Wherever they maneuver, they flout once-sacrosanct boundaries between state and private.

Profoundly original, Shadow Elite gives us the tools we need to recognize these powerful yet elusive players and comprehend the new system. Nothing less than our ability for self-government and our freedom are at stake.

In today's environment, it is easy to use fear to mount campaigns to ease those fears. The author helped me understand how people whose name may or may note be known can have power that reshapes a country, namely, the United States of America. To justify a greater and greater military-industrial complex, even a "Star Wars Defense", all you need is a small group who have found a way to have great influence on the needs of this country. I dare one to read this without wondering about our future.

What disappointed you about Shadow Elite?

The author has discovered for herself that the world is full of corrupt politicians, bureaucrats and businessmen. Apparently she believed this warranted another book on this topic. Here Wedel provides us with several tepid examples (many of them lifted from previously published articles on this subject) of mercenary officials who enriched themselves through their connections to powerful elites. This work is dreadfully wearisome and dull. If a prospective reader wishes to kill some more brain cells, then I advocate reading this book. Or, still more preferable; imbibe a litre of excellent Scotch whiskey.

What could Janine Wedel have done to make this a more enjoyable book for you?

She could have submitted this material as a trade paper to her peers in the academe, where it would have been safely shelved far away from the guileless crowd.

Her performance was what one would expect from a lecturer in Sociology; monotonous and soporific.

What character would you cut from Shadow Elite?

Dear fellow readers: please, please, stay away from this one.