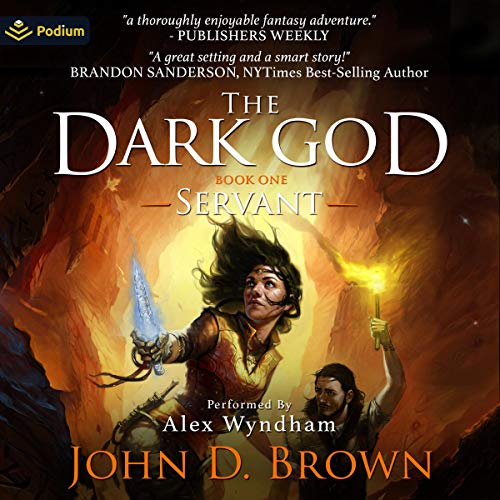 A spirited blacksmith's daughter accused of using the dark and terrifying sleth magic. The young man who hunts her. And the ferocious monster who wants only to be free.

Trapped in a web of lies and ancient secrets, of right becoming wrong, the three must struggle not only against each other but also against a being of irresistible power, a creature who is gathering her servants to usher in the impending human harvest. If the three succeed, they will save those they love the most. If they fail, the clans of the land fall with them.

Thus begins the towering fantasy series that introduces an elaborate new world, a multifaceted system of magic, and a cast of compelling characters and creatures. Listeners who love deep, rich worlds, strong characters, and perilous adventures will be delighted with the action, surprising turns, and discoveries.

The character weren't exceptionally dynamic, but the story was engaging enough. I listened to this on audible, and found that this is possibly the best narration I've heard yet!

The reader of these books is really good. I like finding his voice and listening, it's funny tho because if you listen a bunch other stories that Alex has read flash back in my mind. He can only do so many different voices and in this one he must have done. 30 different characters it's quite a lot of dynamics to play that many characters

What starts out as abruptly fractured chapters soon becomes clear as a means to introduce the tale's disjoint characters along with their backstories early on. As the saga's name implies, this fantasy focuses on the dark arts, however, its usage is not only exercised by those with evil intent, although there is plenty of that. There are also those with this talent who have banded together to resist those people who are bent on limiting those who can practice this magic to a select powerful few. Additionally, there is an unknown dark presence, long ago forgotten, that has returned to reclaim its former control over all humankind.

While there is a strong element of coming-of-ageism, that is only one aspect of the novel. There are substantial threads involving substantive familial relationships and, of course, the evilness that is ever-present.

John D. Brown proves himself as an excellent writer who can weave a complex, and often poignant, tale. Alex Wyndham is very adept at voicing this novel's full breadth of characters from adult men/women and adolescents.

I liked this first book so much that I didn't hesitate purchasing the next two novels even before finishing this one. So much so, that I fast-tracked the next novels ahead of others I've had in waiting.

Grew on me at a steady pace and left me with no choice but to start on the next book immediately. Great narration helped bring the characters to life in my mind.

I absolutely loved it! I couldn't stop listening and now that it's over I need more!

jumped around and made it confusing at times.. imo annoying main character.. Great narrator.. unsure if ill continue the series.

agonizingly drawn out when the action is going on.

I'm almost angry at how long it took to get answers, and when they start to come,they get pulled back. By the time the good parts finally came, I was frustrated at how drawn out it was that I immediately turned it off, slammed my Kindle down,and went to bed angry. ugh not getting the next book.

Unique Take on an Old Story.

I thought it was great. A bit wordy at parts, but I was hooked.

The story was slow and confusing to understand initially, but over the last third of the book things became clearer and fun to listen.

Good Start To A New Series

Talen and Sugar. These two, along with Argoth, are the central characters. At the beginning it is a bit difficult to determine who will be the lead character as the three remain about equal in time given in the book. In the end, I needed up enjoying the two younger characters the most.

Not sure there was any favorite scene as this book is mostly about getting to know the players. The ending scene with the fight against the goddess was good.

There are some funny scenes when Talen discovers that Sugar and her brother are hiding at his home, and his fear that they may corrupt him. Their interactions make the book.

I enjoyed this book and felt it had really strong characters. I think John Brown has a talent that starts to show in this book, but I wondered a bit if the editor might have had too strong of a hand as the world building is a bit slim. I sometimes found myself wishing their was more in the description of the world this book was set in, and think that maybe had the author gone a little more in depth this book would have risen from good to great.

Narrator Alex Wyndham was exceptional, and in fact I found this series after looking for other works he had done after listening to another series from a different author. I think he will become a more used narrator in the future.

Overall, I liked this book and am looking forward to the next few books in the series.