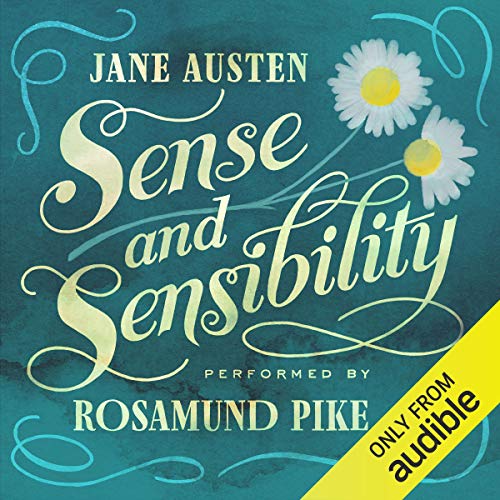 In rural 1800s England, things go bad for a young matchmaker after she finds a man for another woman. Emma is considered by many to be Austen's finest novel. The book has been adapted countless times to stage, film, and television.

The Greek myths are amongst the greatest stories ever told, passed down through millennia and inspiring writers and artists as varied as Shakespeare, Michelangelo, James Joyce and Walt Disney. They are embedded deeply in the traditions, tales and cultural DNA of the West. You'll fall in love with Zeus, marvel at the birth of Athena, wince at Cronus and Gaia's revenge on Ouranos, weep with King Midas and hunt with the beautiful and ferocious Artemis.

In rural 1800s England, things go bad for a young matchmaker after she finds a man for another woman. Emma is considered by many to be Austen's finest novel. The book has been adapted countless times to stage, film, and television.

The Greek myths are amongst the greatest stories ever told, passed down through millennia and inspiring writers and artists as varied as Shakespeare, Michelangelo, James Joyce and Walt Disney. They are embedded deeply in the traditions, tales and cultural DNA of the West. You'll fall in love with Zeus, marvel at the birth of Athena, wince at Cronus and Gaia's revenge on Ouranos, weep with King Midas and hunt with the beautiful and ferocious Artemis. 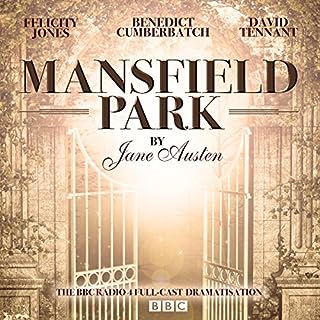 Felicity Jones, David Tennant and Benedict Cumberbatch star in BBC Radio 4's full-cast dramatisation of the novel by Jane Austen, one of the great English classics. Seeking a position in society, young Fanny Price goes to live with her rich aunt and uncle. But her life there is not as she might wish. Felicity Jones plays Fanny, whilst David Tennant is her cousin Tom and Benedict Cumberbatch his brother Edmund. 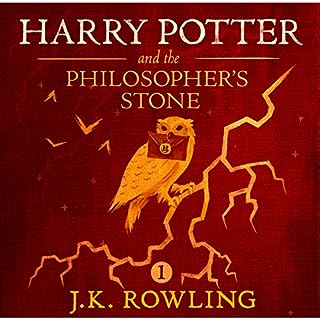 Harry Potter has never even heard of Hogwarts when the letters start dropping on the doormat at number four, Privet Drive. Addressed in green ink on yellowish parchment with a purple seal, they are swiftly confiscated by his grisly aunt and uncle. Then, on Harry's eleventh birthday, a great beetle-eyed giant of a man called Rubeus Hagrid bursts in with some astonishing news: Harry Potter is a wizard, and he has a place at Hogwarts School of Witchcraft and Wizardry. An incredible adventure is about to begin! 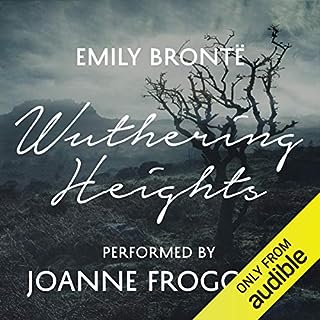 The unapologetic intensity with which Emily Brontë wrote this story ensures that it will forever be considered one of the greatest works of English literature. A passionate tale of a chaotic and often violent love, Wuthering Heights transcends your average romance and, with its Gothic undertones, takes the listener on a journey through one man's lustful hunt for revenge. 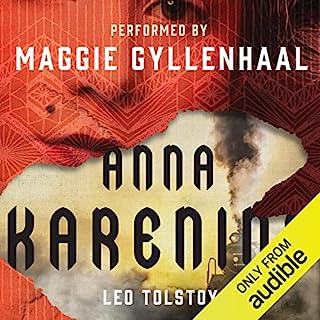 Leo Tolstoy's classic story of doomed love is one of the most admired novels in world literature. Generations of readers have been enthralled by his magnificent heroine, the unhappily married Anna Karenina, and her tragic affair with dashing Count Vronsky. 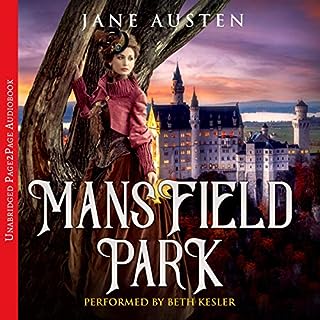 Adopted into the household of her uncle, Sir Thomas Bertram, Fanny Price grows up a meek outsider among her cousins in the unaccustomed elegance of Mansfield Park. Soon after Sir Thomas absents himself on estate business in Antigua (the family's investment in slavery and sugar is considered in the Introduction in a new, post-colonial light), Mary Crawford and her brother Henry arrive at Mansfield, bringing with them London glamour, and the seductive taste for flirtation and theatre that precipitates a crisis. 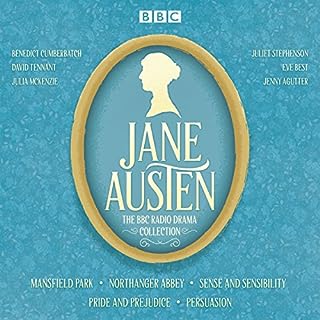 A collection of BBC radio full-cast dramatisations of Jane Austen's six major novels. Jane Austen is one of the finest writers in the English language, and this volume includes all six of her classic novels. Mansfield Park: on a quest to find a position in society, Fanny Price goes to live with her rich aunt and uncle. Northanger Abbey: young, naïve Catherine Morland receives an invitation to stay at the isolated Gothic mansion Northanger Abbey.

In this Audible Exclusive production, Academy Award® nominee Rosamund Pike (Gone Girl) narrates one of Jane Austen’s most beloved works, Sense and Sensibility. In this timeless tale of misguided romance and heartbreak, two teenage heroines must overcome the pitfalls of Georgian England’s high society in order to achieve the love and happiness they seek. The admiration that Pike has for Austen’s work is shown clearly through this passionate delivery of Austen’s first published novel.

“The more I know of the world, the more am I convinced that I shall never see a man whom I can really love.”

Jane Austen’s first published novel, Sense and Sensibility, tells the classic tale of love and heartbreak in late 18th-century England. The story follows the romantic trials and tribulations of the daughters of the recently widowed Mrs. Dashwood as they encounter, and learn to handle, the emotionally reckless male characters of Georgian society. In order to find happiness, the two teenage heroines (Marianne and Elinor) must each learn to navigate through a life where status and money govern the rules of love.

A true classic of English literature, Sense and Sensibility is written with all the hallmarks of Austen’s style, providing strong female protagonists, great irony and wit, and showcasing her superb talent for character creation and dialogue.

Jane Austen is one of the most influential and celebrated novelists in English literature. The daughter of a Hampshire clergyman, she was the seventh of eight children and was, from a young age, an avid reader and writer. After graduating from Oxford, Austen survived typhus and embarked on a literary career seeing her works published anonymously throughout her life.

Best known for Sense and Sensibility (1811), Pride and Prejudice (1813), Mansfield Park (1814), and Emma (1816), her six full-length novels have rarely been out of print and have spawned numerous film, television, and drama adaptations. Rich in satire, romance, and wit, Austen is renowned for her critiques of 18th-century British high society and the role of women within it.

Rosamund Pike is an acclaimed English actress most recognized for her breakthrough role as a Bond girl in Die Another Day (2002), where she won the Empire Aware for Best Newcomer, and her towering lead performance in Gone Girl (2014), which won her an Empire Award for Best Actress. A graduate of English literature from Oxford University’s Wadham College, Pike began her career in stage productions and television appearances before later transitioning into film. Having often spoken of her admiration for the works of Jane Austen, Pike played Jane Bennett in a 2005 film adaptation of Pride and Prejudice as well as providing narration of this novel for Audible in 2015.

I almost didn’t purchase this book, because, despite being a diehard Austen fan, I’ve never liked Sense and Sensibility very much. But Rosamund Pike is a FANTASTIC narrator, and brings out all the humor and delights that even the most careful reader might otherwise miss. This is a must-hear, even better than her incredible performance of Pride and Prejudice. If she narrates Emma, Persuasion, and Mansfield Park, I will eagerly buy them all. Grade: A+

You Must Listen to This Book!

I can’t say enough good things about this book. Rosamund Pike’s performance made the story new and fresh for me. I had just finished Pride and Prejudice read by Ms. Pike and enjoyed it so much that there was no question that Sense and Sensibility would be my next listen. If there was a third Austen book read by Ms Pike, I would be listening now! Even if you have read the book or listened to other recordings, try this one, it is that good.

Having previously listened to Rosamund Pike's narration of Pride and Prejudice, I knew this would be worth a credit despite having read Sense and Sensibility many times over. Rosamund has the most pleasant voice and accent, when coupled with a Jane Austen novel, makes for a wonderful listen. She keeps up a good pace, and adds subtle changes of voice when different characters are speaking. I think she understands the tone of Austen's writing perfectly.

I'm a big Jane Austen fan. I love to be transported to her world where life is simple, and relationships are complicated. While Sense and Sensibility has never been my favorite of her novels, it is still excellent. The language is beautiful, and the themes are still true today. While I'm sure men could love this book just as much, I think any woman could read this and relate to the characters hopes, desires, and worries in relationships.

I bought this purely for Rosamund Pike's narration, and will continue to do so with anything she narrates!

Excellent narration of a long-winded story

I absolutely love Austen's Persuasion and Pride & Prejudice. But this audiobook, took a long time to get interesting. I mean like 4 hours of listening until the story actually became a story, instead of just boring narration about day to day living. This is a very dry listen and I would not listen to it again even though Rosamund Pike's reading is excellent.

Jane Austen is Jane Austen. But Rosamund Pike!... Amazing! Please get her to nerrare more of Austen's books!!

Rosamund Pike's performance of this time-honored classic was thoroughly enjoyable and flawlessly executed - highly recommended to all!

rosamund does a great narration I love p&p and loved this rendition. now if she could do all the others I would be so happy. especially northanger abbey which is my third favorite

a new recording. what a delight!! listened in 2 sittings... did not want to take a break for sleep!

I loved Rosamund Pike's reading of this classic. So many things I hadn't noticed before just jumped out at me!
I particularly love her performance of Mrs. Jennings. :)

A huge letdown after listening to Pride and Prejudice. The plot is weak and tepid, the characters unappealing. There is, as in all Jane Austen novels, a bit of tension as to who will marry whom, if at all. But given the uniformly unappealing characters--who cares?
Rosamund Pike did a great job with Pride and Prejudice, but is only so-so here. She was probably as bored by the book as I was.
In sum, this is one to skip.

I greatly enjoyed this audiobook! Although I already knew the story, the speaker presented it in such a way it felt like I was hearing it for the first time!