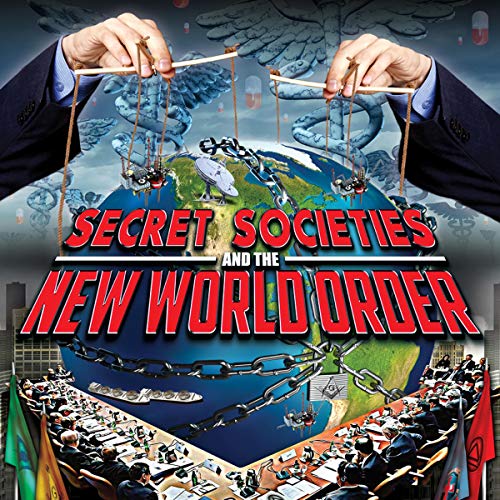 As the world struggles with the coronavirus, a nefarious secret society consisting of powerful global elites are conspiring to rule the entire planet through an authoritarian world government in which they control everything from the banks to the media. They achieve this by owning 99% of the world's wealth. They come from ancient family bloodlines and pass down their power from generation to generation. For thousands of years, they have been doing this with one goal in sight - complete and total supremacy on Earth. This is the darkest, untold tale of the war to control the masses. This is the story of what they believe, what they do, how they do it, and why.

Origins of Secret Societies - Discover the core of the secret societies' belief systems. Explore the secret origins of Freemasonry and the links to Serpent Cults examining the actual members of the Illuminati.

The Freemason Conspiracy - Explore the myths, folklore, and legends in the world of secret societies, with evidence of an all-too-real conspiracy for a one-world government.

Knights of Malta and Cagliostro - The history of the Sovereign Military Order of Malta is revealed while discovering occult and sinister forces at play from the days of heroic battles against Ottoman forces.

Christ's Bloodline Revealed - The final truth behind the DaVinci Code. Tim Wallace-Murphy is an international best-selling author, known throughout the world for his deep knowledge of the real bloodline of Jesus Christ.

Sacred Stone Worship - For millennia mankind has worshipped stones. From Mecca to Megaliths, we have held them aloft as sacred objects and gifts from the gods constituting the most ancient form of religion.

Egypt's all Powerful Cross of Thoth - Egypt's great pyramid once housed an instrument that enabled the Egyptians to rule for thousands of years. Discover the truth to mankind's most revered symbol: the cross.

What is Next for the New World Order? - Learn of a startling prediction of what is being planned to accelerate implementation of the One World Government and NWO agenda for control of global resources.

Terrible execution of a wonderful premise

Please, save your money my friends, this is honestly a terrible production. Choose any other book on this topic to listen to.

The first roughly half the book is interesting as it discusses portions of secret societies. There is however some substantial audio quality issues. These stem from the reader being drowned out by the constant background music.

I find very little in the first half to be inaccurate from my own studies.

Now, let me identify the problems, there’s a lot of the last half of the book where there is clearly video being taken and you completely miss out.

They discuss slides you can’t see, there is a part where they’re apparently looking around inside a Masonic temple in Australia and the symbols contained within that you’re not given the opportunity to view and are not described.

The interviews are unclear as to who is speaking. There’s significant issues with audio quality with the speaker and the person being interviewed which muddle the performance. Specifically the part with Robert Bauval, who is top billed as being the narrator. I assumed he was heavily involved in the production which is not the case.

The ridiculous music choices and the excruciatingly bad production force me to give this a lackluster score.

The music in this narration is too loud and distracting and it's difficult to focus on what's being said.