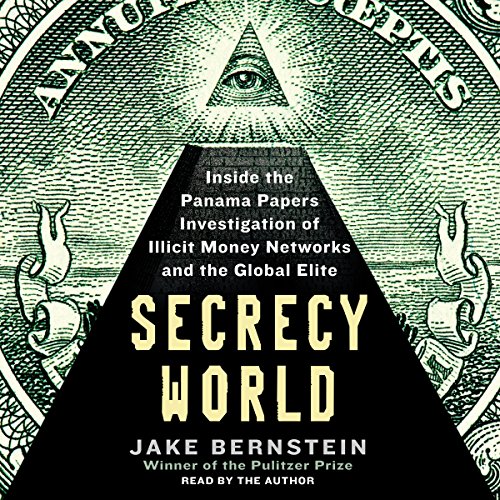 Pulitzer Prize-winning journalist Jake Bernstein takes listeners inside the scandalous world revealed by the Panama Papers, a landscape of illicit money, political corruption, and fraud on a global scale.

A hidden circulatory system flows beneath the surface of global finance, carrying trillions of dollars from drug trafficking, tax evasion, bribery, and other illegal enterprises. This network masks the identities of the individuals who benefit from these activities, aided by bankers, lawyers, and auditors who get paid to look the other way. In Secrecy World, Pulitzer Prize-winning investigative reporter Jake Bernstein explores this shadow economy and how it developed, drawing on millions of leaked documents from the files of the Panamanian law firm Mossack Fonseca - a trove now known as the Panama Papers - as well as other journalistic and government investigations. Bernstein shows how shell companies allow the uber wealthy and celebrities to escape taxes and provide cover for illicit activities on a massive scale by crime bosses and corrupt politicians across the globe.

Bernstein has traveled to Latin America and Europe and within the United States to uncover how these strands fit together - who is involved, how they operate, and the real-world impact. He also recounts how Mossack Fonseca was finally exposed and what lies ahead for the corporations, banks, law firms, individuals, and governments that were implicated.

Secrecy World offers a disturbing and sobering view of how the world really works and raises crucial questions about financial and legal institutions we may once have trusted. This audiobook discusses the fragile scaffolding upholding any tax haven, the flexible laws of banking, and the radiating impact of an international financial scandal.

I liked this better than the original Panama Papers book (also here on audible). The previous book was rather preoccupied with the experiences and fears of a couple of reporters. This one ranges further, with ease. It is colorfully told, with not only nuts and bolts of deals, but personalities and locations neatly described, and broader histories, with more background, into the laws and concepts behind the surfaces we see. This sort of business spans Fortune 100 firms, wealthy folks seeking privacy for understandable reasons, pretty dire international criminals, and everything in between. There are many dimensions to all this, and this work moves fluently from one to another. As it turns out, the regions, governments and cultures have their own points of view, and all this is deftly captured here. The author's narration is not shining, but serviceable enough.

Explores the exploitation of the world

What a compelling book. Bernstein helps one understand the complex legal, but unethical, and then also illegal and unethical revelations in the Panama papers and other leaked documents that have enabled a group of intrepid reporters to expose how the rich get richer and the rest of us not only get poorer, but likely are funding their corruption. Highly recommend!

Loved the insight into how the rich hide their wealth, and how far reaching it really is! Great listen for anyone curious about offshore bank accounts and so much more.

start to finish interesting and enlightening.. a must-read if you ever wondered how many gets laundered and the networks that connect the wealthy and the laundromat

The author is an ok narrator but he should take the time (30 minutes) to learn to pronounce Medvedev, Nazarbaev, dacha and a few other terms. For many years I was a reader (as opposed to a speaker) and I mispronounced many words in my head... that's ok! Speakers can help you learn to pronounce out loud... seek them out!

Otherwise, this is a very informative book on the nuts and bolts of tax evasion and tax avoidance through offshore shell companies. I was amazed at how small some of the accounts were that sought to avoid taxes... in some cases only hundreds of thousands of dollars. Why would you risk jail or public ridicule just to avoid these fairly nominal taxes? The only answer that I could come up with is that the wealthy are willing to cut off their nose to spite their face! It's actually a badge of honor to cheat the government... something you can tell your friends about while cruising the Mediterranean on your yacht.

This is a terrific view of how the world works. must read for everyone who cares.

Good until the end

Great book. It was very readable for such a complicated topic. It was a fascinating journey into topics I knew little to nothing about. It definitely broadened my understanding and I’m sure news articles that wouldn’t have caught my eye in the past will now be of interest to me. I don’t fault the author for including the last chapter on Trump. Im sure it will help him sell more books and if President Trump does have a fall from grace this book could be seen as prophetic even if it was really just a Hail Mary at getting some extra interest. Examples: some powerful sketchy Russians bought some condos in his high end development? So what? He put his name on a building and some other people associated with that same building had accounts with MosFon? I’m not saying there is no value here, but it seemed like much more of a stretch than the rest of the book.

I enjoyed the information and story line. Up until the clearly political and partisan innuendo at the end of the book. If that part had been less accusatory and author/reader smoother in delivery, it would have gained another star in my opinion.

An insightful and engaging account of offshore structures to evade taxes, launder money, hide fortunes from creditors and spouses, etc. It describes the ICIJ, the cooperative of investigative journalists around the world who organized and analyzed millions of bank files leaked to the ICIJ that uncovered the names of hundreds of persons who owned offshore accounts. This became known as the Panama Papers. Bernstein writes in clear and well researched detail about the Panamanian law firm, MOSSFON that set up corporate structures in countries for persons to hide their identities in offshore account for lawful and unlawful purposes. It is about the successful days of this business and then its downfall when many countries clamped down on bank secrecy, like Switzerland. This is a great accompaniment with MONEYLAND, by Oliver Bullough. By itself it describes the world of tax evasion by our large corporations and billionaires who are not paying their fair share to support the government from which they enjoy doing business and proclaim they are great corporate stewards.

The book was an interesting read. It opened my eyes personally to what people with money, riches and resources are capable of. The ability to curtail taxation and enable corruption and greed. Keep in kind, this book is based on factual information, listen to a lot of the names being dropped.