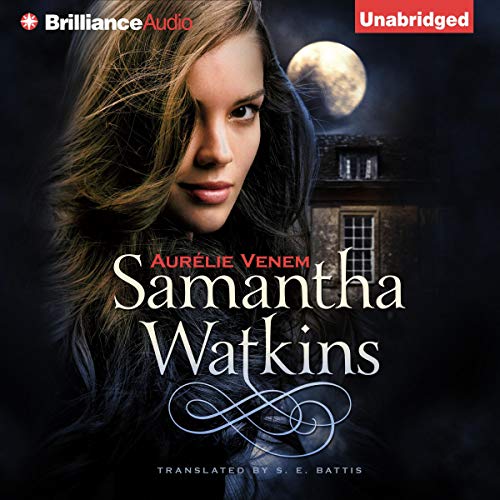 Young librarian Samantha Watkins has always been perfectly content with her humdrum existence. Never easily fitting in with anyone anywhere, she feels most at ease in silence, among stacks of books. Sam believes in leaving fantasy and drama to the characters in her beloved novels. But one night when she leaves work late, she finds herself center stage in a tale of vengeance and terror.

Samantha is rescued from a gang of vampires by Phoenix, a mysterious and otherworldly man. Suddenly her paranormal adventures take a far more extraordinary turn than any story she's ever read. Phoenix, her savior, is actually a vampire as well, tasked with stopping his peers from killing. With no possibility of returning to her former life, Sam becomes his assistant. Together they investigate a series of mysterious disappearances and attempt to save the human race from a horrible fate. Battling vampires thrills and empowers Sam, but where does she stand with supernatural Phoenix? Could Phoenix, through their work together, become a different man?

Help! where's the next book?!

come on.. you can't have a book end like that and not have the next in the series at least translated! please make the next books available.

I very much like how this story unfolds. This book is written in French, then translated into English. The follow-on books are written, but have not yet been translated. The story opens with a misfit librarian, Samantha Watkins, gets mixed up with a vampire. This story is about two people getting to know each other. The plot line has to do with a group of rouge vampires causing serious trouble. Samantha (Human Heroine) and Phoenix (the male Vampire Hero) have to not only navigate their relationship, but his acquaintances and his bosses, yet has to take down their enemies or be faced with their own execution.

This is a THRILLER-romance. You will like this if you like supernatural characters and want a more cerebral story. Amy McFadden does a fabulous job narrating. I salute Stacey Battis for translating this. You cannot tell it was originally written in French.

I recommend this novel, you won't be able to stop listening. I can't wait till the next installment is released. Give it read.

Too Stupid to Live

There are three choices for TSTL here: Samantha, the mundane heroine, Phoenix, the vampire hero, or me, for reading / listening to the whole thing. Or, you could make it simple: all three of us are TSTL.

Samantha gets mad over the same faults in her vampire and herself over and over, she gives up and then lets him back (with apologies) over and over, and she doesn't know why she is attracted to him, and thinks so out loud, over and over. To her, everything is a "volcano of mad." She expects him to trust her with his deepest, darkest, most dangerous-to-himself secrets after just a few weeks and then gets pissed [big time] when he doesn't. Grow some big girl ... flowered underwear, Sam.

Phoenix, despite having lived 500+ years, has no clue why anything he says offends the girl he's kidnapped and then made his sleuthing assistant. He expects her to never be scared when he reveals a new talent or does something unusual. He flees the scene of [spoiler omitted] without any thought to his mission or duties to his boss. She does the same, and throws a hissy fit.

Oh, and did I mention that the plot has holes to drive a large starship through? Many opportunities to nab the bad guys come and go in the course of the novel with no action by the MC's except to bicker. Or, no thought of using [spoiler omitted] when the suspects return to the same district over and over.

And, why oh why did I keep listening? I'm not sure. Yes, I was out of credits and new books. Yes, I wanted to know if they have a HEA, but so what? Perhaps it was the voice of a reasonably good narrator.

I really love this book and I would love to read the next book , to where story take us.

Please translate next books as I'd love to know the story ending. It was very good

I want more and soon please!!

If you could sum up Samantha Watkins, Book 1 in three words, what would they be?

What was one of the most memorable moments of Samantha Watkins, Book 1?

I was so drawn in I cried. Lets just say that doesn't happen much with books. That alone is a reason enough for 5 stars!

Have you listened to any of Amy McFadden’s other performances before? How does this one compare?

No but she did an awesome job!

LOL see the above answer! Yes I cried! I will gladly do it again for more Samantha Watkins

I want the next books in the series asap. You supply and I am demanding!!

Translated from the French, this is only the first volume available in English. There appears to be 4 books in the series but none of the rest have been translated.

I found the story line pretty compelling even though the language was a little stilted. Part of it had to do with the fact that it's narrated by a naive, lonely librarian. But I think part of it was the translation. That being said, I was drawn into the story of Samantha and Phoenix.

One note: the narrator actually screams when Samantha screams in the story. It's pretty disturbing to hear.

The novel ends with a cliff hanger and without the English version of the 2nd book in the series, we're all left hanging! If given the choice, I think I might've waited for the 2nd book to be available before I listened to this one.

If you could sum up Samantha Watkins, Book 1 in three words, what would they be?

Really enjoyed this book. Great story and naration. The only problem is that this is a series and only the first book (which ends in a cliffhanger) has been translated into english! PLEASE, PLEASE, PLEASE translate the other books for us!

loved it! I am anxiously awaiting the translated version of the next one! And Amy McFadden is one of my favorite narrators.

Best book I've ever listened to!

This book was outstanding I laughed one minute and was on the edge of my seat the next. And having the amazingly talented Amy Mcfadden as the narrator, just made the book that much more amazing!