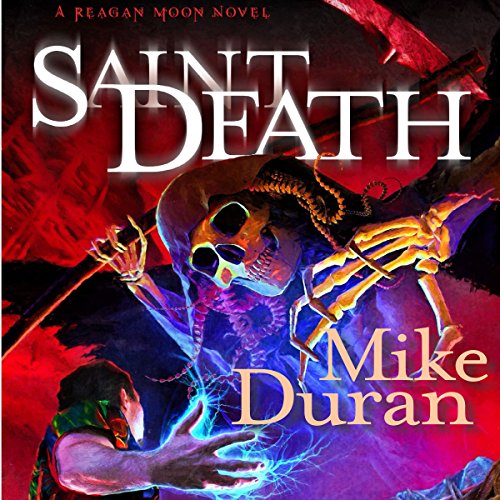 Reagan Moon didn't plan on being an earth guardian. He was your average paranormal reporter...until 1,000 volts of raw electricity fused an ancient relic into his sternum. It left him with Powers and lets him do things most humans can't. There are others like him, seven of them to be exact. They call themselves the Imperia and are charged with keeping Earth from going down the toilet. This usually involves fighting monsters, tweaking the laws of physics, and keeping lots of booze and bandages on hand. But when Saint Death comes knocking, no amount of holy water and hand grenades can slow her roll.

She's the queenpin of the Santa Muerte pantheon. The folk religion's central deity often appeared as a Virgin or a bride. Some called her the Grim Reapress. But mostly she was known as Saint Death. Now she's got a companion. With the help of the Summu Nura, a Neuro priestess has rediscovered the Grimoire of Azrael, the Archangel of Death. And the Tenth Plague is about to be unleashed upon Los Angeles. Apparently, only Moon and his weathered compatriots can prevent the angel's arrival. Yet earth guardians aren't indestructible...as Saint Death is about to prove. Myth and history collide in the second installment of what Publishers Weekly called "one of the best indie novels of 2015."

Saint Death: A Reagan Moon Novel (Reagan Moon #2) by Mike Duran is book two in the series and just as good as book one! The author was giving away so many audio books to a few people that responded first to his newsletter and I for once was on the ball or he was kind enough to let me have it regardless. Either way, he let me have a book! Thank you so much. I had almost finished the first book so I finished it and immediately started this one. Both are great. You don't need to read the first book to read this one, it really could be a stand alone but the first one I gave a five star to, it is worth it. This continues the great series with lots of fun characters, paranormal events, creatures, strange items, action, mysteries, and magic. I like how this series is developing. Enjoyed the narration also. Thanks again for the book!

I honestly have nothing bad to say about this audiobook. Randy Streu’s narration for Reagan Moon continues to be spot on, and Mike Duran continues to deliver fast-paced, complex urban fantasy story.

Great book two of this series

I was gifted this audible book, it is not my usual type book I read/ listen to But I definitely enjoyed it! If you are looking for a Quirky enjoyable read this is a book for you. Interesting characters, interesting story line.