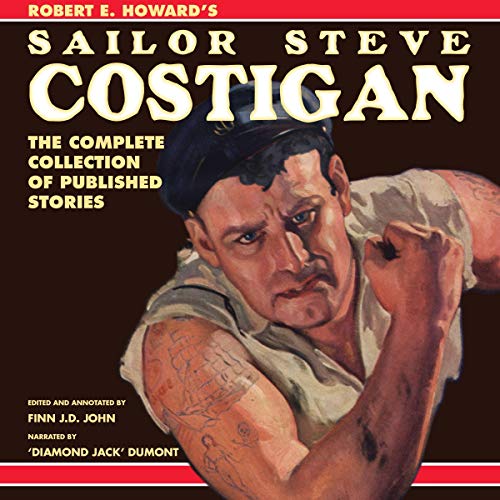 Robert E. Howard is best known today for his "sword-and-sorcery" stories. But in the early 1930s, he was a legend in boxing circles for his humorously over-the-top adventure stories starring the sailor Steve Costigan, champ of the sea girl - the toughest trading vessel on the seven seas.

Steve Costigan is a mariner and amateur boxer, with a heart of gold and a head of solid wood. In these 21 tales, he blows around the waterfronts of various far East ports with his white bulldog Mike, getting swindled by clever dames, subduing the occasional underworld criminal, and getting into fistfights with anyone who can hand out and/or take a good punch, in and out of the ring.

Here's a taste - the first four paragraphs of Circus Fists:

Me and the old man had a most violent row whilst the sea girl was tied up at the docks of a small seaport on the West Coast. Somebody put a pole-cat in the old man’s bunk, and he accused me of doing it. I denied it indignantly, and asked him where he reckoned I would get a pole-cat, and he said well, it was a cinch somebody had got a pole-cat, because there it was, and it was his opinion that I was the only man of the crew which was low-down enough to do a trick like that.

This irritated me, and I told him he oughta know it wasn’t me, because I had the reputation of being kind to animals, and I wouldn’t put a decent skunk where it would have to associate with a critter like the old man.

This made him so mad that he busted a bottle of good rye whiskey over my head. Annoyed at such wanton waste of good licker, I grabbed the old walrus and soused him in a horse-trough - us being on the docks at the time.

The old man ariz like Neptune from the deep, and, with whiskers dripping, he shook his fists at me and yelled, “Don’t never darken my decks again, Steve Costigan. If you ever try to come aboard the sea girl, I’ll fill you fulla buckshot, you mutineerin’ pirate!”

Good stories, but the narrator is distracting.

Good stories, but I find the narrator's accent and exaggerated pronunciation rather distracting. Makes it hard to follow coherently.

This collection of short stories is a great window into a bygone era, featuring a sailor protagonist who in most of the stories comes upon some fortune, faces an unimaginably tough foe, survives by virtue of brute strength and fortitude, then usually humorously loses the fortune, and goes on no worse for the wear, having an upbeat, devil-may-care attitude. Finn J.D. John's voicings bring the characters to life and preserve Robert E. Howard's dynamic energy of storytelling. Warning that being a product of a different ere there is racism featured in some of the stories, hence the four stars.