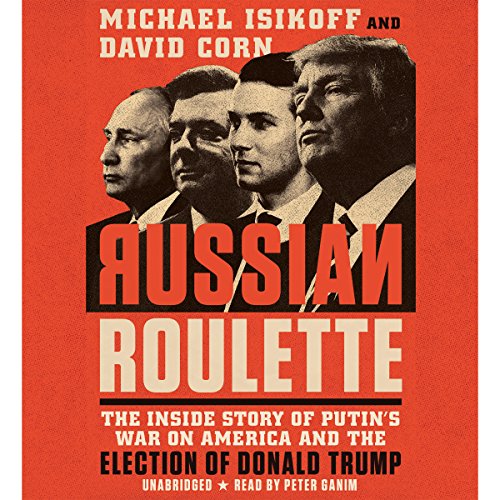 The incredible, harrowing account of how American democracy was hacked by Moscow as part of a covert operation to influence the US election and help Donald Trump gain the presidency.

Although the 2016 presidential election and Russia is the back drop for the book, this is a story about total government, commercial and political incompetence at the highest levels. I voted for B. Obama was a huge fan of Obama before I listened to this book. Obama and the White House could have, and should have, taken care of this active measures attack during 2015 and 2016. However, shy and timid, afraid to act, afraid to influence the election, completely "the lame duck" for two years, the Obama administration's inaction and countermeasures paralysis is without question. This is clear after reading this very well written documentary.

In addition, H. Clinton's, her staff and information technology and cybersecurity team were also totally incompetent. Paralyzed and paranoid about the FBI's investigation into her terrible decision to use a private email server earlier, they did not heed any of the many and repeated FBI warning to secure her computing infrastructure. H. Clinton (whom I reluctantly supported for president prior to reading this book) and her team basically let all of this happen by not securing their systems and not cooperating with the FBI when the FBI tried to help them. Total incompetence and fear by the Clinton team and the DNC, etc.

I am not a Trump fan and think the sooner he is out of the White House the better for America. However, if the prior administration had of done their jobs protecting the country and critical infrastructures, including monitoring Facebook and other social media for foreign activity; most of the current problems with national security could have been avoided. Anyone with half a mind could see all of the misinformation on Facebook going back many years, yet no one did anything about it because they did not understand the simple basics of information warfare.

Facebook is also to blame as are other big, modern day media companies who permit people to register without verifying their identity, permit foreigners to buy advertising for political purposes, permit politically related advertising without identifying the true sponsors, and share the personal data of US citizens that can be weaponized against the national security of the country.

M. Zuckerberg and the Facebook team put profit and public relations before national security, this is obvious. Zuckerberg talks like an innocent child, and if so, why is such a child running the most influential and powerful media company in the world? It's time for him to step aside, I think; especially after the Cambridge Analytical story broke last week.

Yes, we all are mesmerized, myself included, by the 24 hour cable news reality show called "The Trump Presidency". However, this is not all Trump's fault. Trump and his team were probably more unwitting than everyone thinks. After all, if the entire US government, the prior administration and the intelligence community could not stop Russian interference active measures, why do we expect an inexperienced bombastic reality show TV star turned president to stop Russia?

Trump is probably afraid for himself and his family. He has very little institutional support except for rural, uneducated and disenfranchised voters and Russia. He must be "freaking out" as they say. Trump should admit he was duped by many people and move on to fix this very serious problem in cybersecurity. As the saying goes, "do not attribute to malice what can be attributed to incompetence." This story illustrates this old saying in spades.

This book is the most factual I have read so far on this topic. It's much more factual than "Fire and Fury", which was a great read, but not factual nor historical. "Collusion" by Luke Harding was good but not as factually deep. "The Plot to Hack America" by M. Nance was decent, but Nance is too biased against Trump and failed to see the core problem, incompetence by both the prior administration, the current administration and high tech for-profit personal-profile-for-sale companies.

This book is not very entertaining (compared to F & F). This book is factual and unbiased, meaning it is dry like a textbook.

This book is a must read if you want to know the truth, and the truth is not pretty for Democratic, Republicans or Zuckerberg and Co. Stop blaming Putin, and stop blaming Trump and stop the blame game, and fix this huge cybersecurity problem in America. Please. As for Zuckerberg, Mark is a nice guy. He should step down from Facebook and let adults who understand nationals security and the role of media in a democracy run Facebook.

I've finished this book just days after Trump has fired Rex Tillerson as Secretary of State, adding to the chronic chaos of this Administration. The ending is a disturbing, disorienting shock, not for any specific information (it's fairly well known by now, at least generally, what's been going on) but it feels that the authors simply stopped typing in the middle of recording this American horror story and declared, "The end".
Many new insights. I appreciate Obama's dilemma a bit more but wish, with this new perspective, that he had not done so much\so little to protect Americans from forming the wrong conclusion about his intentions. For someone so intent on creating a historical legacy, it appears that Obama vacillated because , in the end, he didn't trust history to sort out the truth.
This will be a good book to return to from time to time as indictments and convictions and Russian poisonings and accrue.

Regardless of your political leanings under normal circumstances - left, right, or somewhere in between, this involves all of the above. This is real journalism now, not just another polemic against Trump or Clinton or Obama or Putin. I remember Watergate; and in my opinion this truly is worse. Whereas Watergate involved high crimes, those crimes did not have existential consequences to the degree this does.

This is a game changer. No matter what you know about the run up to the 2017 presidential election, as the saying goes: “You ain’t heard nothing yet”.

Only 4 Stars 'Cause It's So Darned Depressing--

There is so much to make your toes curl in Russian Roulette. There's collusion, inactivity, negligence, greed, incompetence, fire where there's smoke. If you're a Trump fan, you'll find plenty of blame to plop on the doorstep of Obama. If you hate Hillary, there was dirt aplenty for Putin's cronies to find and for Wikileaks to air. If you think Trump is soulless in his avarice and ignorance, oh my god--it's all here.
Russian Roulette is a well-researched day by day, blow by blow history of what happened in and in the days leading up to 2016's election. There are covert operations, not-so-covert meetings. There's dissembling, obfuscation, and outright lying on so many fronts by so many people, Democrats, Republicans, Russians.
It will probably not change the way you think, but it's still stunning. Especially when the October Surprise is framed as Putin's birthday gift to himself.
The man is smiling.
And he's barely gotten started...

It's a sleeper with critically important info

Admittedly, if I was reading this book I would have gotten to chapter 1 and quit. However, because it is an audiobook, it got me through the slow beginning and into the far more intriguing parts of the story.

I feel like this book is the primer to what is yet to be revealed to the general public. The book -- which is at times dry -- covers everything. How Corn and Isikoff received this information will forever be a mystery to me.

In any case, as the story of Russia crimes unfolds, having read (or listened to) this book will put you ahead of the rest. Names that still seem foreign to others will be familiar to you and the background behind their motivations clear.

The narrator was excellent in giving this hard and painful text life. Also pronouncing all those Russian names so well, made it easier to keep track.
The book lays out in incredible detail the process of making DT a Manchurian candidate.
The Russians understood that the next war with US will not be bombs and tanks. This was conveyed by a source close to the Kremlin to one of our people, but it was not taken seriously. The details are clear.
We didn’t have defense. We were unprepared. “lacked intelligence and imagination.”
The acceptance of the cyber war as imminent and present was very slow, the response was,therefore, too little too late.
Obama and the whole team could not fathom this scenario. Biden was so shocked- he saw it for what it was- treason.
This part of the book was very painful to recall, but the truth must be our goal now.
When they understood that DT was a Manchurian Candidate- it was too late.
And they thought they were going to a wrestling match at the Olympic where as Putin came to a Street fight with all the dirty tricks and no rules.
Comey screwed Hillary’s chances. The book fails to convenience with the explanation they provide that he thought he was doing the right thing. It could have waited for after the election. If anything- he should have released both. It was painful to be reminded. Extremely painful.
Overall this was a gripping book, in parts John LeCarre, in part Homeland, except this is NOT fiction nor a reality show.
Our democracy is at stake.
This ought to be compulsory reading for every member of the Senate and Congress!

This highly anticipated book by Isikoff & Corn presents the most complete and comprehensive assessment thus far on how and why Russia intervened in the 2016 US Presidential election. If you enjoy this book, be sure to check out Malcolm Nance's "The Plot to Hack America," and his upcoming sequel, "The Plot to Destroy Democracy." Protect democracy, stay informed!

As Joe Biden said in the late part of this book, if this stuff is true, it is treason!

I can’t stand the narration. Very monotone and makes me want to fall asleep. He lowers his voice at the end of sentences and it is so annoying! Can’t stand it.

Trump is a chump..

It’s amazing that all this data is out there, and the ignorant masses in the United States don’t pay attention to it. A high ranking Russian government official made a public statement that they were in touch with all trumps campaign executives before, during, and after the campaign. Also trumps obvious and public statements enabling the Russian meddling.. its a gaslighting world we live in currently..