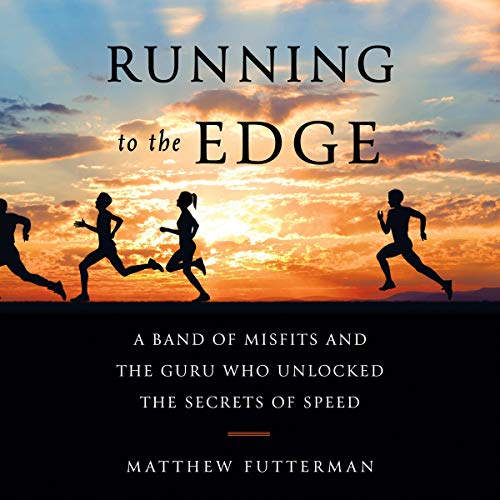 Running to the Edge

"Gripping...he narrative is smooth and immediate, almost effortless in its detail, if occasionally breathless, like a good fast run..." (The New York Times Book Review)

In the dusty hills above San Diego, Bob Larsen became America's greatest running coach. Starting with a ragtag group of high school cross country and track runners, Larsen set out on a decades-long quest to find the secret of running impossibly fast, for longer distances than anyone thought possible. Himself a former farm boy who fell into his track career by accident, Larsen worked through coaching high school, junior college, and college, coaxing talented runners away from more traditional sports as the running craze was in its infancy in the 60s and 70s. On the arid trails and windy roads of California, Larsen relentlessly sought the "secret sauce" of speed and endurance that would catapult American running onto the national stage.

Running to the Edge is a riveting account of Larsen's journey, and his quest to discover the unorthodox training secrets that would lead American runners (elite and recreational) to breakthroughs never imagined. New York Times Deputy Sports Editor Matthew Futterman interweaves the dramatic stories of Larsen's runners with a fascinating discourse of the science behind human running, as well as a personal running narrative that follows Futterman's own checkered love-affair with the sport. The result is a narrative that will speak to every runner, a story of Larsen's triumphs - from high school cross-country meets to the founding of the cult-favorite 70's running group, the Jamul Toads, from national championships to his long tenure as head coach at UCLA, and from the secret training regimen of world champion athletes like Larsen's protégé, American Meb Keflezighi, to victories at the New York and Boston Marathons as well as the Olympics.

Running to the Edge is a pause-resister...a relentless crusade to run faster, farther.

"Futterman’s subject: Bob Larsen, a visionary coach whose work over the past 50 years changed the course of distance running in this country. Larsen, who started as a high school cross-country coach in the dusty hinterlands of San Diego County, brought together a scrappy, hodgepodge group of fleet-footed male runners known as the Jamul Toads. Futterman places the reader in the middle of the action, a spectator to the story’s improbable unfolding. While Larsen’s later athletes - most notably the Olympic medalists Meb Keflezighi and Deena Kastor, who dominate the book’s second half - ran to international glory and lend a glimmer of star power to the story, it’s the long-forgotten Toads who will elicit the most cheers. 'They are chasing victory, but also the primal idea of doing what the body was meant to do, doing it beautifully and to its fullest extent, which are really the same thing.' Long after they faded into obscurity, the Toads stand as testament that the joy of sport doesn’t lie in the results but in the process, the pursuit of excellence and self-discipline, the rigors and rewards of dedication." (The New York Times Book Review)

"Running to the Edge reveals the untold history of how a determined coach and his motley crew of underdogs practically defibrillated US distance running. It is at once a beautiful meditation on effort and a tale as captivating and suspenseful as a great race." (David Epstein, New York Times best-selling author of The Sports Gene)

"Running To The Edge is at its heart a vivid, fascinating and affectionate portrait of a man who changed the sport of running in America, and of the sport that changed him. Through the story of a pioneer coach, Bob Larsen, Matt Futterman deftly describes both the running boom era of the 1970s and 1980s, and the resurgence of American distance-running talent in the aughts. I can't think of a runner who wouldn't enjoy this book." (Ed Caesar, author of Two Hours: The Quest to Run the Impossible Marathon)

Well worth the listen

I love reading and listening to running books. Everything from the Once a Runner trilogy to Born to Run to Jurek's books. This one fits right in there.

It’s one book that I will recommend for all runners. It’s only about running and no BS page filling details about the brushing or coffee they drank. I loved it. Will listen to it again soon.

A book of the runner's long resume.

TO ME, It seems to be race records, injuries, schools and blah blah...... next to another. It is disappointing and boring. I finally quit in the middle of chapter 23. I didn't get to the "UNLOCK" ing chapter.

as a weekend warrior trail runner, I loved hearing what a true competitive runner go through... loved the book listened to it on my runs laughed and cried along the way with them.

More of a narrative than a book on training methods

This book provided a decent story about the history of one of America’s top running coaches, but it doesn’t provide much information for someone looking to gain information on training. The author keeps repeating the phrase “running on the edge”, which is just the author’s way of saying that the runners were doing tempo runs. Bob Larsen was ahead of his time when he had his runners doing tempo runs back in the 70s when most coaches were only doing high intensity intervals, but it seems that Bob’s coaching style is pretty common now. The book does provide some nice history of the long distance running scene in the U.S. over the last 40+ years.

This incredible story contains it all.... history, competition, science and the love of running!

Couldn't put it down, regular speed narration is slow but easily improved with increasing speed of narration

This is a fascinating story, very well written and flawlessly performed. Having grown up in the east county of San Diego, where the first part unfolds, and being very familiar with the lay of the land, I especially appreciated the author's accurate descriptions and the narrator's correct pronunciation of names like Jamul (Ha-mool). I listen to a lot of Audible content and this ranks among the best. Highly recommend.

great story especially if you're a runner or even a casual runner or maybe just a driven individual. I increased the narration by .50 and felt it read better that way, but do what you feel. I tried going back to normal speed and it seemed clunky to me.

Simply one of the best running books about running

This book won't teach you how to set a PR but it will say far more about those who never give up trying to do so.