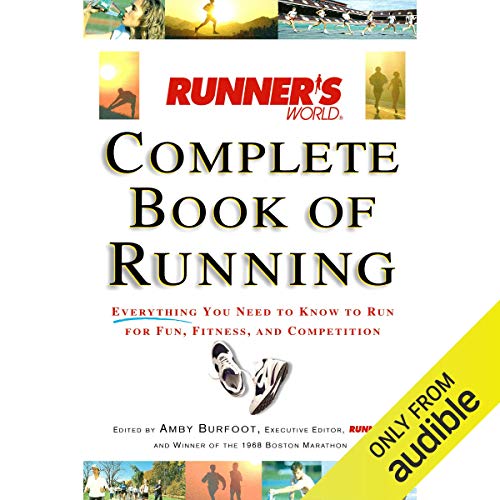 Run faster, run smarter with the latest advice from the pros at runner’s world.

The sport of running is ever changing, be it the shoes we wear or the goals we set, the training methods we use or the role models we emulate. But there is one constant: For 40 years, Runner’s World magazine has been recognized worldwide as the leading authority on running. Now the collective wisdom of the most savvy running writers, coaches, and editors can be found in Runner’s World Complete Book of Running. Whether you are a beginner or veteran runner, here is advice - both timeless and cutting-edge - guaranteed to maximize your performance and enjoyment. Inside you’ll find in-depth coverage of training and racing including:

Packed with valuable advice from running’s top experts on everything from building strength, speed, and endurance to nutrition and injury-prevention, Runner’s World Complete Book of Running is the audiobook you’ll turn to again and again to answer all of your running questions.

A cheap way to make an audiobook...

This book is a compilation of articles taken from Runner's World magazine. The good thing is that there is a lot of good information contained in all of the articles that are read. The downside, though, is that it lacks a cohesive nature. As you would expect, articles written by different authors contain different content and are relaying that author's particular style/method/best practices. Unfortunately, these do not always mesh with one another (conflicts across articles) and when they do, you listen to the same content repeatedly (repetition across articles). I was hoping for a good detailed immersion into running. That detail is definitely there, but you have to pick it out from the repetition and conflicts.

I've been an occasional runner for a couple of years but recently started taking up the exercise seriously. Was looking for a good tutorial to coach myself in spare time and came across this audible book.
This is quite comprehensive covering diverse topics like running techniques, diet, clothing, choosing the right shoe, safety and injuries etc. Have seen a good improvement in my own performance while I was reading the book (went from 2k to 5k endurance within a couple of months). Highly recommended for all beginners.

I agonized over getting this book. No, it wasn't because I'd be using a precious credit - it's Audible, and they've got a "no questions asked" return policy. It was because I was halfway through a 12 week 1/2 marathon training schedule - after resuming running a few months earlier after a 30 year break. (I was busy?) I was having a really rough time of it. I worried that instead of helping, "Runner's World Complete Book of Running: Everything You Need to Run for Weight Loss, Fitness and Competition" (2014, Amby Burfoot, Editor) would make me realize I'd hopelessly bolloxed things and wouldn't be able to fix them in time. Fortunately, that isn't what happened.

"Complete Book of Running" is a collection of stories from "Runner's World" magazine (1966 - present), each followed by "Amby Burfoot's Running Roundup". The first, most immediately helpful piece of advice I got was to slow down, and not to a specific speed - but to a speed I was comfortable running at and I could sustain. The second - more is often not better. In the quest to be able to run 13.1 miles, I was running too far, too often and breaking down muscle faster than it could be rebuilt. I got some very important advice on proper pre-run and race hydration and nutrition and thankfully, stopped getting queasy when I ran.

There was a whole lot more to it, of course, including things I hadn't thought of - like I'll need to replace my running shoes a lot more than I knew. There were several chapters on preventing injuries I hope never to have. I even ended up feeling better about 3 decades of inertia - it's probably why I don't have condromalacia, which is a softening of the cartilage in the knee that happens with overuse. The important thing is I got going and I kept going, and I'm having fun.

Because the book is a collection of articles, it does get repetitive. I quickly learned to listen to the title of an article at the beginning of an Audible chapter and decide if I wanted to listen to it then, or go onto skip to something else. I did eventually listen to all of it, just not in order. I've also listened to several chapters again - in particular, the chapters on preparing for a half marathon and the chapter on speed work.

Did it help? Well, A couple of weeks ago I ran a 15k as a training race and was first in my age group for women - woo hoo! I didn't end up running the half marathon I'd planned, though. 5,000 acres of the San Gabriel's burned a few days before the inaugural 626 Train Run Half Marathon, and the massive amount of soot and smoke that gave the air a gritty texture made the AQMD request the organizers reschedule. Instead, I ran a 5k In one of the beach cities. I came in 181st out of more 1000 runners, and 6th in my age group. So yes, it really did work - and I know when the time comes, I'll be able to run the half marathon.

Burfoot's commentary was a mixed bag - on the one hand, he's really supportive of women runners, enthusiastic about running for everyone, and has some great experience and wisdom to pass on; but on the other hand, I heard about his own dauntingly awesome running career and apple butter one too many times. (Apple butter is made of reduced apples and a lot of sugar, and looks and spreads a lot like peanut butter. Looks good, but never, ever eat it anytime close to a big race.)

Some of the advice was a bit dated - it's 2016, and there are some really great smart phone apps. And Fitbit? Let's just say it's the solitary runner's best pacer.

The title of this review is from a Burfoot quote, "Running has taught me, perhaps more than anything else, that there's no reason to fear starting lines... or other new beginnings."

The narration - well, it was kind of mechanical.

[If this review helped, press YES. Thanks!]

really enjoyed hearing the big picture of running and got some great workout and nutrition ideas that have already been put into practice.

HELP - I'd really like to have the supporting PDF's. The PDF available was for another book. Help

Loved it! Appreciated the in depth guide. all of the information was well written, interesting, and easy to follow. Very motivating!

Good but a bit out of date

Who still listens to “tapes” on their runs? I lost my Walkman ages ago. Who doesn’t use an app to track their runs nowadays? If it’s not on Strava it doesn’t count. While this book provides some good basic info, it could really use an update as a lot of the info has changed - even the run specific info such as this book advising to never train on an empty stomach (lots of new research regarding “fasted training” and EPOC after High Intensity Interval Training)

I really enjoyed this book. There are many references to the incomplete downloadable pdf. The one available on the audible product page is not complete. I really want that PDF

Seemed very dated information and the medical info was total rubbish (non scientific). The quiz was a joke with the chapter after it contradicting the answers given. References to Lance Armstrong and how he did so well are clearly naive. Not recommended.

better then i expected