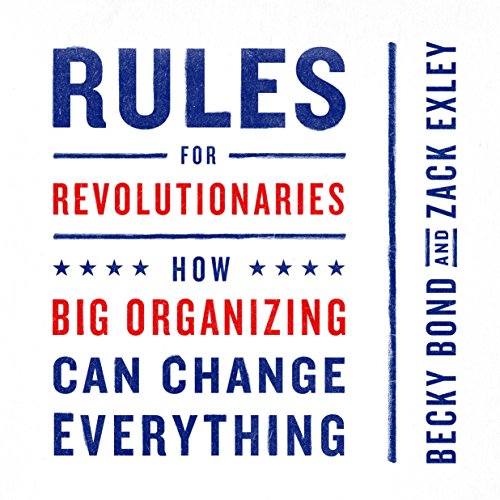 Rules for Revolutionaries is a bold challenge to the political establishment and the "rules" that govern campaign strategy.

It tells the story of a breakthrough experiment conducted on the fringes of the Bernie Sanders presidential campaign: A technology-driven team empowered volunteers to build and manage the infrastructure to make 75 million calls, launch eight million text messages, and hold more than 100,000 public meetings - in an effort to put Bernie Sanders' insurgent campaign over the top.

Bond and Exley, digital iconoclasts who have been reshaping the way politics is practiced in America for two decades, have identified twenty-two rules of "Big Organizing" that can be used to drive social change movements of any kind. And they tell the inside story of one of the most amazing grassroots political campaigns ever run.

Fast-paced, provocative, and profound, Rules for Revolutionaries stands as a liberating challenge to the low expectations and small thinking that dominates too many advocacy, non-profit, and campaigning organizations - and points the way forward to a future where political revolution is truly possible.

Narrator Tia Rider Sorensen enlivens the words of authors Bond and Exley, senior advisors to Bernie Sanders's tech-driven presidential campaign. This spirited rendering gives a feel for the 75 million calls, eight million text messages, and 100,000 public meetings that took place during the campaign. In alternating chapters, Sorensen portrays Bond and Exley as they earnestly share suggestions, highlights, and mistakes for the purpose of influencing future campaigns of all sorts. Thinking big and encouraging volunteers are emphasized in Sorensen's uplifting style. Personal anecdotes add levity and human interest. Listeners will be amused by the chapter titled "The Tyranny of the Annoying," which advises leaders to immediately react to people--no matter how well intentioned--whose negative attitudes can help sink a campaign. It's inspiring and enlightening to hear insider views of one of our nation's most unprecedented presidential campaigns.² --AudioFile Magazine

An motivating read for anyone looking to be a part of the revolution, the scale of organising by the Bernie campaign was staggering. I'd like to read some analysis on how he lost the 2020 election as it feels like they had the recipe for success after 2016.

While there is some good information in here, one should be prepared to navigate some Bernie Sanders propaganda to find it. Also, the authors liberally interpret, and use, the term “revolution”. Leveraging this to create a drinking game is not advised.

Every organizer must read

Fantastic story. I would have appreciated a male's voice for when Zack's parts were being read. It was weird hearing the same thing being said but from a different perspective. I couldn't tell who was speaking sometimes.

A positive, uplifting call to organize

It doesn't matter if you support Bernie or not, the heart of this book is to organize with big, bold ideas.

i help work for the Beto campaign in Texas. This is our guide book for what we do. I love how passionate and driven the authors were to use data-driven approach to decide what works best for elections

Becky and Zack obviously did a lot in a fairly short time with the Bernie campaign and it's inspiring to hear about it. But it's also great they've documented it so others can continue the great work. The ability to unleash the power of volunteers on amazing, big campaigns is something that resonates with me and some of the activism I've been a part of, like the Repower Pt Augusta campaign to have Concentrating Solar Thermal built.

We know that protesting for incremental change or clicktavism is very ineffective but it seems that having a worth while goal, a great core team and the ability for masses of volunteers to help seems like a powerful campaign strategy. That face to face or over the phone conversations are effective and I love the use of the dialler.

This book has great stories of a historic campaign as well as guidelines for building a massive volunteer workforce as well as managing people effectively. Top notch!

Get inspired to I rganize BIG

1. You Won’t Get a Revolution If You Don’t Ask for One
6. The Work Is Distributed. The Plan Is Centralized
9. Fight the Tyranny of the Annoying
10. Give Away Your Passwords !
11. Don’t Let the Perfect Be the Enemy of the Big
12. Learn the Basics of Good Management
14. Grow Complexity by Solving Problems as They Arise
16. Best Practices Become Worst Practices

These "rules" developed out of the tremendous volunteer organizing of the Bernie campaign, will help rewrite the change campaigns of the future. Excellent book.

This it's a very insightful book about the Bernie Sanders campaign, what went right and what went wrong. I saw many of these things happening first hand and now I know why.