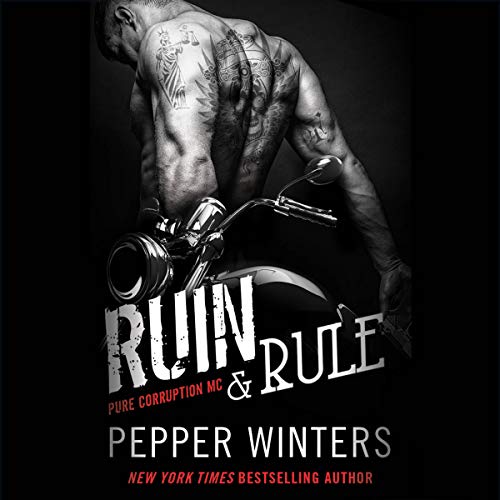 "We met in a nightmare. The in-between world where time had no power over reason. We fell in love. We fell hard. But then we woke up. And it was over...."

She is a woman divided. Her past, present, and future are as twisted as the lies she's lived for the past eight years. Desperate to get the truth, she must turn to the one man who may also be her greatest enemy....

He is the president of Pure Corruption MC. A heartless biker and retribution deliverer. He accepts no rules, obeys no one, and lives only to reap revenge on those who wronged him. And now he has stolen her, body and soul.

Can a woman plagued by mystery fall in love with the man who refuses to face the truth? And can a man drenched in darkness forgo his quest for vengeance - and finally find redemption?

STORY:
At times I was infuriated by this book. It literally felt as though Ms. Winters made the story up as she went along. There were way too many aspects of the story that were unrealistic and in most cases, Winters filled holes by blaming it on the female main character's amnesia. However there were Times while reading this book that I would find myself completely sucked in to the story, trying to figure out what was really going on. I had mixed feelings about the characters; sometimes hating them and at other times, usually once I understood WHY he/she acted the way they had, I liked them. If nothing else, this book certainly was thought-provoking! I'm still undecided on whether I will continue reading book #2.

PERFORMANCE:
I listened to this on audiobook & have a new favorite narrator because of it! Kelsi Nesser kicked @ss! She made every characters voice different from the others, even doing a great job with the men's voices! I was very appreciative that Ms. Nesser used 2 different accents for the female main character, narrating this character's thoughts with one accent, narrating her dialogue in another. This was a brilliant way of helping listeners easily differentiate when the character was speaking versus when she was thinking which is often difficult to decipher when listening to an audiobook.

What a ride.... I just didn't know what would be thrown into the mix next - there's suspense as a woman with no memories is kidnapped and used, mystery as her amnesia starts to break free memories that clouds her judgement, tension as she tries desperately to convince the hard man with the familiar green eyes of their strong connection, horror as he denies her as she is about to be sold, never ending hope that he would somehow believe her to be his one true love and then a sweet and sexy romance as two souls are finally reunited.

But there's so many secrets yet to be unearthed, so much turmoil bubbling under the surface and heartache waiting in the wings to rob these two reunited childhood sweethearts of their chance of ever finding a HEA ending. Then sure enough comes the earth-shattering climactic cliffhanger and all I can say is thank you thank you Audible because book 2's already available. Someone, somewhere is pulling the strings, who is enemy and who is friend, what will Kill (aka Art) have to do to get Cleo (aka Buttercup & Sarah) back and will she even want him after what she's about to discover or will the truth set them both free???

I thought this was a well written gripping raw listen that had such romantic tender moments too as the Star-crossed lovers were betrayed when just youngsters and betrayed yet again. Is it far fetched? well yeah - a woman suffering with double amnesia that wipes out most of her memories however they do start to drip feed her brain bit by bit. However, this is Fiction folks and it's riveting Fiction that I'm 100% happily caught up and invested in. A handsome, complex badass MC President who is eaten up with revenge, vengeance, debilitating loss, grief, guilt and heart aching sadness over the memories of what he has done and what has been done to him.... my heart went out to him. A displaced woman whose brain has shut down because her memories were just too painful to remember and then, Chapter by Chapter the secrets, the revelations, the clues and the questions keep coming so, just as one puzzle piece fits nicely into place, it dislodges another... leaving a frustrating picture with gaps, misplaced pieces and distorted images.... and, as you take one step forward in the story you're suddenly thrust two steps back.

Worth a credit? IMO, that would be a definite YES. Told primarily from Cleo's POV but each Chapter starts with a short insight into Art's thoughts and a couple of the Chapters near the end gives the history into his downward road to joining and taking over the Pure Corruption MC. Great narration too. This is a pulse-pounding, emotional, sinister and corrupt game of manipulation, power, revenge and love that'll leave bodies, shattered hearts, blood and broken dreams.... and jeez, I just can't wait because as each Chapter starts you simply have no clue what's going to happen next.... you can only hope.

This makes me want to never listen to a book again

Had I known that after 15 hours this was going to end with a major cliffhanger and no idea when the next book will show up on audible (if ever) I would have NEVER started this book.

I hate when you are not given a heads up on the book stopping with a MAJOR cliffhanger. When you listen for over 15 hours and are left completely hanging - very frustrating!!!

loved it and couldn't put it down kept me wanting more I can't wait for the other book! !!

cliffhanger!!! looking forward to the Revenge

the story is a bit drawn out. but that it the writer's style.
good read. audible price is ridiculously high when the kindle price is $3.

It ends just when the climax begins.

The book was good but to long. Feels like the author writing a big novel. Then cut it into smaller books. That are still drawn out and never gets to the meat of the story. Now you're left hanging wondering if it was worth the time and credit.

Wow what a story

this is such a unique story that has all the makings of a great mc romance book. I can't wait for the rest of the series.

Very YA - story line was interesting but by third chapter I was frustrated with excessive inner dialogue .... skipped through most chapters ... I'm sure some young adults would enjoy, but not for me ... oh and a cliffhanger of some sort ...

What a smart and clever guy who was seriously wronged and screwed up. To find your one true love and to live happily ever after. A good listen