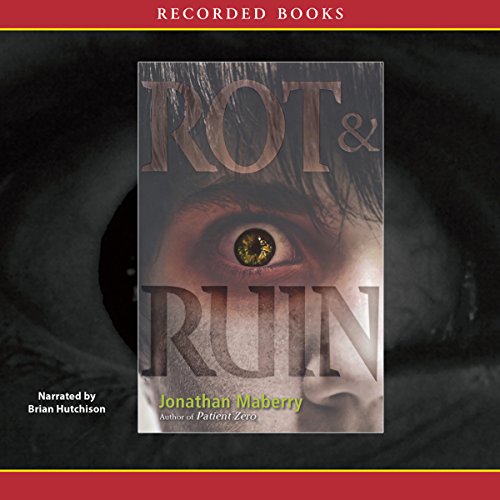 Multiple Bram Stoker Award-winning author Jonathan Maberry’s Rot & Ruin is his debut work for young readers. Fifteen-year-old Benny Imura lives in a world infested with zombies where, when a kid turns 15, he must get a job to continue receiving food rations. Benny has no interest in the family business of zombie killing, but figures he doesn’t have much of a choice. He’s tried out a bunch of other jobs, and hasn’t found anything he likes. But as Benny starts training with his brother, he learns things about being human that he never expected.

Just when you thought it was safe.....

First I will start by stating I am a avid Zombie fan. If a Zombie story was written, read, or made into a movie I have seen and heard it. I am very picky and selective on what I consider to be a "good" Zombie story. Rot and Ruin is, in fact, in my top 10 favorite Zombie stories. Sometimes the scariest thing about Zombies in the apocalypse is just surviving. Sometimes identifying the enemy is not always black and white. Just when you thought it was safe to go back into the words and into the Ruin.........Beware!

Though this may have been meant as a young adult book, I really believe readers of any age will enjoy it. The characters are very well developed, and the relationship between the main character and his heroic and misunderstood older brother is truly compelling. Combined with the zombie action, a hefty dose of post-apolocolytic bad guys and some coming of age elements for both our young characters, and the next generation after the zombie apolocolypse, I found this a highly entertaining and sometimes very thoughtful and moving adventure. The reader does quite a fine job as well. I highly recommend it!

the narrator was fine. the story idea was interesting. the teenage angst was annoying. just wasn't something i wanted to listen to, a whiney teen. I also didn't like the "perfect" do-no-wrong hero's. it all just feel flat for me.

I read the Joe Ledger series!.. and then I purchased this book by accident. I forgot that Jonathan Maberry is the author who writes anti-Christian, anti-American propaganda under the guise of zombie fiction. This book was no exception. I almost admire him for writing something I would have thought too silly to print; a future where people are woke by becoming sympathetic to zombies. While reading this tripe I was forced to analyze Jonathan Maberry's misguided worship of himself as he feigned the display of his supposed moral superiority as literature. "He writes for himself" can be an endearing trait in an author.. in this case it is not.

Not as good as I expected

STORY (zombie fiction) - Audible categorizes this book as Teens Age 11-13, but I disagree. The main character (Benny) has just turned 15, and during the book he grows up in a very bleak California after the zombie apocalypse. I can definitely imagine adults enjoying this book if you are drawn to the subject matter. I am totally not a zombie listener, but I purchased this book because it seemed like it would have a good coming-of-age story underlying all the zombie violence. It does. Benny learns about survival, truth, morality and love. (This is definitely not a romance, but Benny does fall for a sweet girl).

The problem I had with the story is that it moves slowly, IMHO. Yes, there's lots of zombie killing and action, and many people have given glowing reviews. Maybe I just dislike the zombie genre more than I think I do. Even though the story is sweet, it wasn't enough to hold my interest through all the action and violence. I will say that the book is well-written and has some great characters.

PERFORMANCE - Good job, but nothing special about it.

OVERALL - I'd recommend this book for teens older than 13 and for adults, but you probably need to be someone who really enjoys zombie books to thoroughly enjoy this story. There's lots of gross zombie descriptions and lots of killing. Other than that, it's a pretty clean book -- no sex and only minor profanity, if any. This is Book 1 of a series, but it stands alone. I won't be continuing the series.

Had a few moments of goodness, but otherwise I thought it had more painful moments for an adult reader....

Good once I got past the first couple of hours

And I almost *didn't* get past those first two hours. So much teenage angst! And worse, predictable angst. It was obvious from the get-go that there was more to the past than what Benny believed. I just couldn't wait for his eyes to be opened.

But once the story moved out into the Rot & Ruin, it got more exciting and interesting. It's a zombie story with a twist, with true evil found not in the shambling undead but in those who would take advantage of the apocalypse for their own personal gain.

a must listen to to add to your zombie library


14 years have passed since first night- the night the dead came back to life and started eating people. benny was only 18 months old when his father tried to eat him, his mother, and his older brother, tom. benny is turning 15 so he has to find a job. everybody over 15 in mountainside must find a job to earn their food rations. benny and his friends, chong and mortie, must find jobs so they try apprenticing. benny hates every job he tries- he can't see himself performing those tasks for the rest of his life. his last resort is to go into the family business, but benny hates his own brother. benny thinks tom is a coward b/c his only memory from first night is tom holding him and running away as their father attacked their mother.

tom is one of the local bounty hunters. he travels into the rot and run (everything outside of their protected community) to kill zombies, but not just any zombies. tom is hired by people to find and quiet their loved ones so they can have closure.

Tom allows benny to come with him on a mission into the rot and ruin to determine whether or not he’s really cut out for being a bounty hunter b/c most people have become accustomed to living in the safe area and haven’t had to confront and fight a zombie in years.

This is when the story starts to pick up. The first 2 hours are kind of slow so please hang w/it!

This story is about a teen boy growing up in a dystopian world after a zombie apocylapse. I would sort of classify this story as YA (young adult) but not sappy YA. What do I mean by that? I admit it! I’ve listened to the hunger games and divergent. While both are actually pretty good, there were some sappy lovey-dovey parts that I think girls really dig but kind of put guys off. Sorry ladies! LOL There is a young love story. It has its awkward, cute, fumbling, and frustrating moments that happen b/ween teenagers, but it’s not emotionally over the top, e.g. his deep gaze made my heart thunder away as I thought about his rugged hands caressing my face as his tongue gently explored my mouth.

I can relate to the emotions better than in those other stories I cited b/c this story is written by a man. Hold on a second ladies! Even though this story is not told in the 1st perspective, it is told more from a boy’s perspective. I’m trying not to give too much away, e.g. names, but we do see some of the girl’s perspective of the budding relationship.

Ok…the last thing I’ll say about the YA angle is that it reminds me of the innocence of my 1st crush and girlfriend. Don’t get all teary eyed! LOL I grew up in the late 1980s when there still was a modicum of innocence for teenagers. Ok…now you’re laughing at me, but we can debate it later, just trust me.

Not only is there a budding love story, but a story about brothers. All his life, benny has hated his brother tom for running away and abandoning their mother to die at their father’s hands. Tom, who was 20 on first night, has given benny his space, waiting for the right time to tell benny his side of the story.

Tom is a great character. He is honest, honorable, and reliable. Benny looks up to tom’s rivals w/o even knowing that much about them except that they’re bounty hunter, and they’re not cowards like tom. Tom is not petty, and he never holds this against benny. Instead in their time together, tom asks benny questions, talks to him like he’s an adult, and actually insists benny come to his own conclusions. Tom is the kind of guy you wished was your older brother.

Holy cow! I’ve gotten this far, and I’ve hardly mentioned zombies! Most of the zombies in this story are the slow, shambling kind, but newly awakened zombies are smarter and faster. That’s not to say the slow ones aren’t scary. They’re fearsome b/c of their relentless, never tiring nature. And in packs extremely dangerous.

Throughout the story, benny learns more about what it was really like on first night. One of the nice touches mayberry adds is zombie cards. Zombie cards are cards that have pictures of famous bounty hunters on one side and descriptions and histories on the other side. Benny comes across a super rare zombie card of the lost girl. Her story is awesome.

I haven’t said much about the town they live in, mountainside, but if you’ve read this far, then I suggest you stop reading and download the book!

I’m an avid zombie fan, and I really enjoyed this book! This is a zombie apocylapse story w/real characters! While not my favorite type of zombie story, I like the initial outbreak plots the best, I can say this is one of the better stories that I’ve listened to in a while! And Ohhh…it happens to have zombies in it.

Overall, I would say this is a MUST listen to if you’re a zombie fan! Just remember, the 1st 2 hours are kind of slow.

This is a good series. It is a young adult series and reads that way but it is very good.

The reader isn't bad, but gets his voices screwed up a lot. Motor city hammers voice is just weird. Not horrible though.

Narrator did an awesome job. But the story just kind of keeps dragging on, hard to stay listening to it, I find myself missing sections because I get distracted. I read his other book about Joe Ledger, it was great. That is why I gave this a shot. I got half-way through, and just want a cliff notes version to finish up to know what happens. I will say, this could be a great story for some people though. It just didn't entertain me. It has alot of potential because it was a nice twist on an old story.