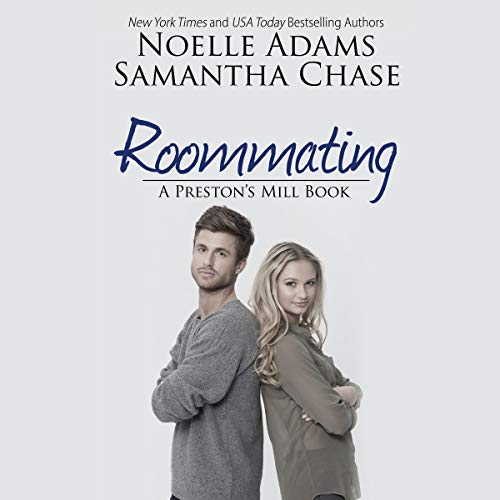 Forget all those other roommate romances you might have listened to.

Heather and Chris don’t hate each other...very much. And they don’t have sex all the time...at least not at first. Chris doesn’t go around shirtless, flexing his muscles and driving Heather wild...too often. And he doesn’t get jealous and possessive every time she goes out with another man...well, maybe occasionally.

But they definitely don’t fall in love...right away.

When Heather comes back to her hometown, she plans to take over her father’s historic restoration business and move into a beautiful converted apartment in Preston’s Mill. Then she finds out she’ll have to partner up with the one man she can never forgive. Chris Dole, who abandoned her father and betrayed her trust three years ago.

It gets even worse. They don’t just have to work together. They have to become roommates for six months to prove they can get along. That means Heather will have to play nice with Chris and put up with his obnoxiousness, his drop-dead sexiness, and his ugly recliner named Flo.

She’ll do what she has to do out of loyalty to her father, but she isn’t going to like it.

At least not much.

Charming story of a couple brought back together after a three year separation.

Heather's father brings Christopher back to town to rejoin their remodeling business. Heather doesn't want to trust Chris because he left once before. Her father sets it up that she and Chris share an apartment besides the business. Will his plan work? I really enjoyed the by play of all the characters. Especially their elderly neighbor.

What a good book/story/narrating!!! What fun to enjoy! My first one of this series but not my last!!! Hope others like this as much as I did.

What year does Tom think this is???

Holy smokes? Who is worse? Tom, the dad for basically pimping his daughter out or Chris, a giant jerk of a guy who was such a jerk and needed to have his lights knocked out. What kind of father does that? He knew Heather went to school and was planning on taking over the family business for the entirety of her life and then refuses her the business unless he brings in a man. No, just no. Unless you were born in the 50's and thinks a woman can't be in charge this book will just make you mad. What the heck was the author thinking? Not even a good premise as ridiculous and out of date.

Loved the books very much, they kept me very interested & entertained. love to read more.

Getting to know each other

A book about insecure couple that are forced into a difficult living and working situation.