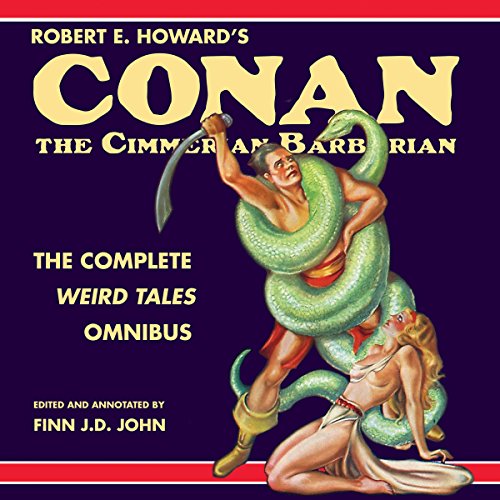 This collection contains all of Robert E. Howard's Conan the Cimmerian stories published during his lifetime, contextualized with biographical details of their author.

A full e-book copy of this book in Interactive PDF format is included and can be downloaded by clicking the "PDF" link in your Audible library (it's in the "Title" column). This PDF includes the audiobook chapter numbers, to make navigation easier.

Excerpt from the introduction:

"When the first Conan of Cimmeria story appeared in the pages of Weird Tales magazine in December 1932, nothing quite like it had ever before appeared in print. Author Robert E. Howard had been writing stories broadly similar to it for half a decade; but it was with Conan, and the Hyborian Age storyworld in which he was placed, that Howard finally fully doped out the sub-genre that would become known as "sword and sorcery", of which Howard is today considered the founding father.

"Conan's origins date back to an experiment in 1926 titled "The Shadow Kingdom", featuring the character Kull, exile of Atlantis. The idea - Howard's great innovation - was, at its core, historical fiction set in a pre-historical period. That pre-historical period - being, of course, lost in the mists of time - could contain anything Howard might like to include: evil races of sentient snake-things, sorcerers, undead creatures, demons walking upon the earth, anything.

"In other words, Howard was creating a secular mythology."

a great according of Robert Howard's works.

thank you Mr. Finn cometary and narration are appreciated. Sad that Mr Howard isn't here to hear it.

Although a collection of seemingly disjointed stories you still get a vivid picture of the epic character that is Conan. I believe Conan to be the greatest of the anti-heros.

What did you love best about Robert E. Howard's Conan the Cimmerian Barbarian?

Evocative reading and great stories. Excellent introduction to Sword and Sorcery as well as Pulp Classics.

What does Finn J. D. John bring to the story that you wouldn’t experience if you just read the book?

Finn J.D. John pours his heart into the Conan mythos.

Listening to 35 hours of Conan would be enjoyable but even a Barbarian needs sleep.

If you could sum up Robert E. Howard's Conan the Cimmerian Barbarian in three words, what would they be?

What other book might you compare Robert E. Howard's Conan the Cimmerian Barbarian to and why?

Howard was accused of "stealing" ideas from Lovecraft and simply placing them in a fantasy setting. I did not get that impression at all. The two are quite different - with the notable exception of Howard's frequent use of demonic, "Lovercraftian" monsters that were obviously drawn from those Cthulhu sources. Howard reads more like the works of Fritz Leiber or R. A. Salvatore. Enjoyable and easy-to-read; sometime humorous; with simple, sometimes obvious "twists".

This is a collection of mostly short stories. I think "The People of the Black Circle" was most engaging, but really no story was a disappointment.

I wouldn't say I was moved - the book isn't that deep. But prior to each chapter the narrator provides information about the story. It's publication history, what was going on in Howard's life at the time, and historical critical reception. These prefaces provide a great setup for the story and add a lot as you listen.

If, like me, you're a fan of Dungeon's & Dragons, I think you'll find another level of enjoyment here. Gary Gygax said in interviews that these stories were a source of inspiration and often direct input for content in the original version of D&D. If you know that game well, it is easy and satisfying to spot those influences. They also offer great ideas for encounters and stories in your own D&D games.

Mr. John's Conan is to audio what Arnold's was to the movie. The voice just is not IMHO right. Howard's Conan is perfect pulp fiction. It needed a better performer. It wasn't awful but it could have been better.

Formulaic but good enough to at least listen.

Finn J. D. Jhon's Narration was decent enough, if not sometimes a tiny bit hard for me to follow. The stories were quite hit or miss, but Finn's parts explaining E. Howard's life situation when the stories were written made me put them into context as regards to the authors Life. I'd recommend the audiobook still, perhaps not as a first purchase as I enjoyed E. Howard's writing style even if the stories, as explained by Finn in the biography parts were extremely formulaic.

this is where the roots of fantasy are watered. An epic group of tales that helped make fantasy what it is today.

Needed for fans of Conan

This is the must must have for any fan of sword and sorcery. Finn J.D. John's performance and analysis of the work is superb. John really brings Conan to life and I cannot image Conan in any other voice. This should be required reading for any player of dungeons and dragons!

An Excellent Collection of the Cimmerian

What made the experience of listening to Robert E. Howard's Conan the Cimmerian Barbarian the most enjoyable?

The voice acting was great, and complemented the stories very well.

The influence Conan has on modern fantasy in all its incarnations is seminal.

"The Hour of the Dragon" should be considered one of the greatest high fantasy stories ever.

"The tales that inspired generations, of the man who would be barbarian, conqueror, king."

This is a great collection.

The stories are really great. Suspense, action and fantastic world building - it's all there. But the reader makes very long sentences without intonation or pauses to give weight to the words. The voice is pleasurable enough and he makes voices for different characters, but then hastes through many parts monotonously and time and time again did I find it difficult to follow what was actually happening.

Marc Thompson should read these. I'd buy them immediately.