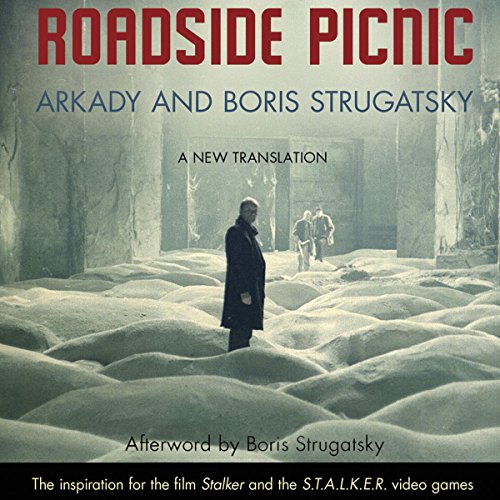 Red Schuhart is a stalker, one of those young rebels who are compelled, in spite of extreme danger, to venture illegally into the Zone to collect the mysterious artifacts that the alien visitors left scattered around. His life is dominated by the place and the thriving black market in the alien products. But when he and his friend Kirill go into the Zone together to pick up a "full empty", something goes wrong. And the news he gets from his girlfriend upon his return makes it inevitable that he'll keep going back to the Zone, again and again, until he finds the answer to all his problems.

Really great story, interesting idea, the reading is perfect. I loved it! Not for the fragile souls tho

I was impressed with this short 1970s Russian science fiction novel, which still feels pretty fresh and original. It's as gripping as any recent book, and, with a few minor updates, could have easily worked in the present day. The story begins about a decade after aliens of some sort landed on Earth, bringing several strange "zones" into existence. The zones are very hazardous places, full of dangerous substances and weird phenomena, many of which defy all current human understanding of physics and even causality. People who go in run a high chance of being killed (or being unkilled, in the case of corpses that come back to life).

Roadside Picnic is set in a small town close to a zone in North America (given the bleak tone and character attitudes, the authors undoubtedly had good reason not to use their own country). The population of this town breaks down into roughly two central camps, the first being legitimate scientists studying the artifacts the aliens left behind -- though no one is really certain that such mysterious beings actually "left", or even that they were "there" in person in the first place. Then there is a subculture of people called "stalkers", who go into the zone illegally to gather artifacts for sale on the black market. The protagonist is a rough-necked former stalker nicknamed Red, who is working for the scientists at the outset of the book, but hasn't lost his swaggering, cynical view of human nature or his distrust of authority.

If this were a typical US or British sci-fi novel, we might expect Red and the scientists to set to work solving the puzzle of the artifacts and eventually figure out the motives of the aliens, but this book has a different, more subtle set of concerns. Like Stanislaw Lem's brilliant Solaris, it uses the incomprehensibility of the truly alien as a mirror to human psychology and our ideas concerning our place in the universe. As one scientist points out, the visitors might have simply been advanced beings on some equivalent of a casual holiday, leaving their litter behind them for the local creatures to scavenge. If so, what does that say about the economy and culture of exploitation that's arisen in the zone town? Or about someone like Red, one of the few people with the instinct and drive to reach the heart of the zone and the Solaris-esque wish fulfillment mechanism that awaits him there?

Roadside Picnic has one of those ambiguous endings that threw me for a loop at first, but the more I reflected on its connection all the layers of commentary in the book, the more powerful it became. There are probably some indirect observations about Soviet society in there, too, given the way the national authorities in the story treat certain zone residents, but the less obvious bits doubtless went over the head of an American like me.

In sum, a work of stunning, dark, gritty vision, and one I'd definitely add to my best-of-science-fiction list. I can't speak with authority to the authenticity of Olena Bormashenko's recent Russian-to-English translation, but it felt solid. The audiobook narrator did a decent job -- his old school tough guy voice is a good fit for Red, and adequate for some other characters.

this is going on my best list. this is an excellent existential scifi story. there is some creepy stuff at the beginning and the writing is top notch. I don't want to give anything away. at times it's a little noir-ish in its tone and in the trapped situation of the characters. my only advice would be to fast forward through the 1st 7 minutes or so at opening as there is a forward by LeGuin that is good to return to afterwards, but she does mention a couple of plot points that I'm glad i didn't know and was able to experience the story without prior prejudice of any type. Excellent and mature and i highly recommend it.

Aliens have come and gone, leaving behind zones of strange and lethal artifacts. Like moths to a flame, some people who still live near the zones are fascinated by the mystery and thrill of obtaining bits of alien refuse, though most pay for it with their life. It's hard for me to remember that this book was written in the early 70's. And as a life-long reader of science fiction I can't believe I am discovering it for the first time at age 46. What a fantastic read! And what a great reader! Forster's voice fits the story perfectly. The only thing I struggled a little with was that each of the four sections of the book represents a jump forward in time. If you are looking at the print, the white space and bold section headers shout out the importance of these shifts, but in listening they fly by quickly. If you are not paying close attention you may get a little lost.

A story about sad people with not much Sci-Fi

Despite the low rating I don't regret getting the book. I just like a bit more science fiction than this book really offers. It does center around a town which had some sort of visitation which affected the town and stalkers that go into "the zone". However this is really about tragic lives and hardships. It is a collection of unhappy people that seemed trapped or unwilling to escape. The science fiction elements are rare only pondered over lightly between bouts of aggravation and sad lives. A bit to dark and lacking sci fi for me.

If you only read one Russian Science fiction novel, make it Roadside Picnic. Subject to heavy Soviet censorship during its beginnings, the Strugatsky brothers have only relatively recently been rediscovered appreciated for their remarkable skills. This a true gem for the science fiction genera, and while Robert Forster's heavy accent can take a bit of getting used to, he does a solid job with a great, albeit very bleak, story. Very highly recommended!

Great performance of a new translation

If you could sum up Roadside Picnic in three words, what would they be?

Written before the Chernobyl disaster, it seems to predict the Exclusion Zone in the form of an alien crash-landing which upsets the natural order around the site, and brings with it great new technology. The main character is a gritty Stalker who dares to enter the Zone to recover artifacts. Now people who sneak into the Chernobyl are called 'Stalker' after this book.

Would you listen to Roadside Picnic again? Why?

I listened to it more than 5 times, the performance is fascinating and the translation is so well done.

What was one of the most memorable moments of Roadside Picnic?

The moment Red gets to the golden sphere and his internal monologue about how to think and articulate what's his wish.

Have you listened to any of Robert Forster’s other performances before? How does this one compare?

Amazing performance, so powerful and captivating, the range of emotions and tones makes it more of a cinematic journey.

It haunted me for months, and made me go into a zone of mental detox.

I still listen to this book every few months, it's an amazing place to visit and will be for a long time.

I don't speak Russian, so I can't tell you if this is a good translation. I can tell you it's a beautiful novel. Classic science fiction. The language and narration are just enough to make me smile at the memory. A devious story with some marvelous characters and an ending that makes you listen twice...or three times.

Listen to the foreword...it's important. Then enjoy the book.

I'd been waiting a long time for this one.

One of the best performances ever.

A stark, gritty, beautiful novel elevated by one of the best performances I've ever experienced in an audio book.

What did you love best about Roadside Picnic?

it felt like The Sopranos if this bizarre alien chernobyl appeared in New Jersey.. I loved it.

Which character – as performed by Robert Forster – was your favorite?

I listened to it 3 times already