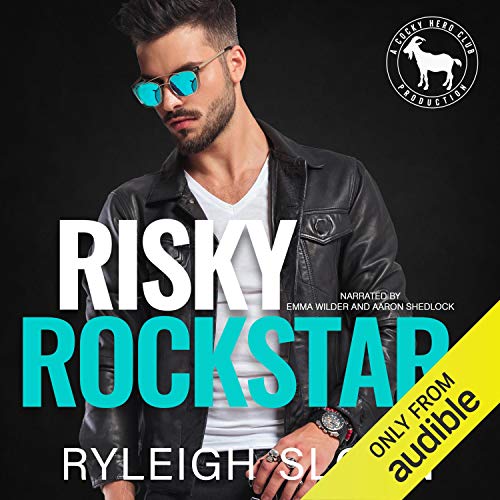 When Hayley Stephens proposed a collaboration with me and my band, I thought the only risk was that we wouldn’t connect and our music would suffer because of it. I couldn’t’ve been more wrong.

Our connection was off the charts and unwittingly, Hayley filled a void I’d long since grown accustomed to. There was just one problem: she was involved with Kevin Peyton and I had no right falling for her.

Then she admitted that her relationship was a farce and things got serious fast. But the closer we became, the more it became clear that we were each hiding demons. That safe space we had started to disintegrate, and everything went to shit along with it. I can feel her holding back. I know she doesn’t trust me enough to let me in. Can I be her safe space or will my demons take over?

Am I worth the risk? I know she is.

Not enough good words to describe this one...

This book left me stunned in so many ways. The narration casting with Aaron and Erin could be more perfect. They fell into their characters and made you feel every single word. The real world struggles that Kade and Hayley deal with are so relatable. Kade's tragic past combined with Hayley's insecurities make you feel with them on a soul deep level. I don't think I've every related to character as much as I have Hayley. She jumped off the page and I experienced everything through her. Thank you Ryleigh for writing a book that tackles these issues. Thank you Aaron and Erin for making everything so real and raw.

I read the book first and I didn't think it could be possible to love Hayley and Kade anymore, but this was so so good. ♥️

Oh, rockstars and what better to know they are just like us, broken/damaged people. It's written well and it's a bonus for the the audio. Aaron Shedlock & Emma Wilder, did such a great job of narrating these characters, Hayley & Kade. They had serious chemistry throughout the music industry but their demons they had whether in the past or present haunted them. It was a story about music business scandals to a possibility to have a relationship despite what the public thinks to many other relationship issues but also, as a professional rockstar, many interesting obstacles to overcome. It's a bit too long for me but I truly got hooked in the beginning!!! So if you are into rockstar romance with a bit of soap opera moments, this would be a book to read/listen to.

I love this series and how connected they are even though they each can be read as standalone books. I will say anyone reading this book would benefit from reading Cliche first to get the back story/alternate view point from Hayley POV.
Ryleigh had me crying in the prologue, and it wasn't pretty, but thankfully I knew I'd get their HEA. This author had become a favorite of mine and its because of how vested I get in her character from the start! Narration was fabulous and I just love anything Emma narrates. Aaron was great as well!

Kade and Hayley were perfect!!!

My first book by Ryleigh Sloan, but I thoroughly enjoyed her writing. And the way this book was interwoven with a least two of her previous AND British Bedmate by Vi Keeland and Penelope Ward was soooo amazing. This is definitely in my top 5 stories in the Cocky Hero Club.
Also, really loved the narration by the fabulous Emma Wilder and Aaron Shedlock!!

I really liked the narration by Aaron Shedlock and Emma Wilder- both narrators played each character flawlessly and really drew me into the story.

I read Cliche, another Ryleigh Sloan romance and this story follows along on a similar timeline. It was awesome to get another perspective about what was happening when Kevin (from Cliche) proposed a fake relationship with Hayley to protect his long term best friend/love Chloe (in Cliche- good book too). This time, we understood the events from Hayley's perspective and I adored Hayley. She was so sweet and loyal and pretty much a perfect character. Kade had some hardships that made him more sensitive to relationships and I did think that their issues dragged on just a tad long. But I really liked their interplay and overall really enjoyed this book and the narration for the audiobook.

This is the third book I've read/listened to by Raleigh Sloan. I loved the first two so much that I went looking for more. I was not disappointed. It was like a two for one! I LOVED getting a peek at Kevin's side of the story. He's from the book CLICHÉ. LOVE, LOVED, LOVED that. Also getting to know Hayley has made that book even better. I'll definitely be rereading these two books.

Hayley's story was heart-rending. Both Hayley and Kade had heartbreaking previous relationships that shadowed into their own. The HEA was sweet.

Aaron Shedlock and Emma Wilder were excellent narrators. There was so much emotion felt in the performances. Perfection.

I had the opportunity to read the book but the audio version is so amazing.
This was my first listen to these narrators and I loved them. The way they brought Kade and Hayley to life is unbelievable.
I’m adding them to my must listen list.
Ryleigh, your stories always captivate from the beginning. Great job ❤️

I really thought I was going to give this 4 or more stars. I was ready to. The start of this book is great. I'm hooked from the beginning. The writing is so well done. All the characters are well developed the dialogue also flows really well. I started out loving this book, but about half way to 3/4 of the way it starts to feel too long. It also started to feel like unneeded drama kept being added into the story. The relationship between the 2 characters is good. The sexual tension is super high. When they finally do the deed it is very worth it. I really wanted more rockstar vibe too. All these guys were such good guys it almost felt too easy. The end was good. This book just could have been great, so much of it I loved, so much of it was everything we all want. But it was just too over written. The narration was amazing though. I do recommend it still. The majority of this book was great.