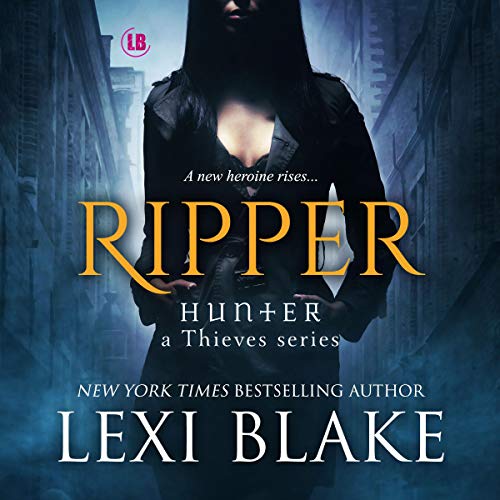 Kelsey Atwood is a private detective with a problem. She came from a family of hunters, growing up on the wrong side of the supernatural world. Tracking down bail jumpers and deadbeat dads may not make her a lot of friends, but it’s a lot safer than the life she turned her back on. She was hoping to escape from the nightmares of her past, but her latest case has brought them right back to her door.

A young woman has gone missing, and she didn’t go willingly. When Kelsey discovers that the girl is actually a shifter, she knows she should drop the case and walk away. But this shifter was a sweet kid, and she’s in serious trouble. More females are missing and the evidence points to a legendary killer. Bodies are piling up, and her case is becoming center stage for a conflict that could shatter the fragile peace between wolves and vampires.

As the hunt intensifies, she finds herself trapped between two men - Gray, a magnetic half-demon lawman, and the ancient vampire Marcus Vorenus. Both men call to her, but when a shocking secret about Kelsey’s family is revealed, it could ruin them all. To stop the killer, she will have to embrace the truth about who - and what - she truly is.

A Thieves Novel by Lexi Blake

Can't wait until the next audible. I considered reading the book to continue the story but I really liked the voice of the narrator. Excellent job on the story and narration.

I had been waiting for this to come out in audio. This is book 6 in the Thieves/Hunter series, so if you haven't read the first five please do so. I already knew the book was fabulous because that is all Lexi Blake does, and Kitty Bang did another incredible job. Kitty can do a mean Marcus, and I can't wait for the rest in the series.

I knew it would be good!

Of course. It’s not possible for Lexi to make an average story in the Thieves Series. The characters can speak for themselves, with Kitty Bang’s help, of course. Ripper did not disappoint. Thank you for finally sharing this book with your non-reading fans. It would be so wonderful if you could share the rest of the stories via audible.

Why didn’t you promote this? I found Ripper only because I was rereading Steal the Night. It goes to a rating page and name of next book in series. I didn’t believe my eyes. I look at Lexi’s social media periodically for Thieves news and never saw an announcement! You could use a better advertiser.

Should have double checked on following books

Good book over all but not having the following books available to listen to is a pain. Probably would have not listened if I had noticed that before purchase.

I’ve been waiting for this audio book and I’m not disappointed. Katie Bang is PERFECT as Kelsey. Loved it just as much as the books. PLEASE release the rest of them!!!

I love Lexi blake's thieves/ hunter series. and kitty bang!
I seriously hope it won't be as long as a wait for the rest of the series to be on audible

DNF - nothing sexy about abuse/controlling

I wanted to like this. I tried to overlook my aversion to the MMC but god I just REALLY hated Grey. The author really wrote him as a controlling jerk that has no redeeming qualities at all. And he was honestly super creepy as well. Who in their right mind would confess they love someone after only meeting them 2 times??? Not just love either, no no no. Complete devotion to the FMC, with creepy pet names after every single sentence he speaks. My vajay dried TF up every time he said “sweetheart”. It honestly gave me condescending vibes whenever the FMC tried to be dependent while she just…. Went along with it? After never having a boyfriend to this jerk who literally just wants her housebound at all times and play cute little housewife while the big strong man saves the day? The more I listened the more irritating I became. What’s worse is that he straight up lied on their first date making it seem like he was letting her chose where she wants to stay and assist him with the investigation as his “partner” until he got her to his place, then he completely flipped to controlling. Telling her when she can leave, who she can meet, who she can stay with. Are we supposed to hate this guy??? I sure do! Cuz that’s irredeemable to me and the FMC should run far far away. At one point, the FMC wanted to finish her investigation and he got angry at one of the vampires and wanted to leave (who doesn’t love a thin skinned man anyways??). She said she wants to stay to finish so he directed that anger to her, called her names, and stormed off because she wouldn’t listen to his demands and leave with him WHILE SHE WAS WORKING. I had to stop after he started controlling her in bedroom activities. Usually I love when the MMC hooks up with the FMC and he goes a little dominate. I don’t know if it’s the narrator or the way the author wrote him but it was so gross to listen to. It’s honestly borderline abuse so when the author tries to make a scene sexy, it is anything BUT. I couldn’t finish it because I just wanted to shake the FMC to have a dang backbone and stand up to herself from a man she literally JUST MET! But no! She lets him get away with it.

I love the concept and story line.

I really did love this book. the only thing that kept me from giving it 5 stars was that the internal dialog got lengthy at times especially during an intense or important moment. Some times so much so that I almost forgot what was actually happening in the moment. other than that I loved it.

🌻Not predicable, at all🌻

I wasn’t sure how this book would turn out. It’s definitely not a typical romance with an expected HEA. It keeps you guessing and was entertaining!