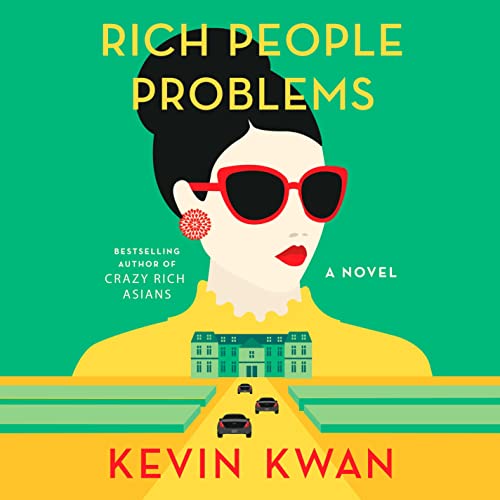 Kevin Kwan, best-selling author of Crazy Rich Asians and China Rich Girlfriend, is back with an uproarious new novel of a family riven by fortune, an ex-wife driven psychotic with jealousy, a battle royal fought through couture gown sabotage, and the heir to one of Asia's greatest fortunes locked out of his inheritance.

When Nicholas Young hears that his grandmother, Su Yi, is on her deathbed, he rushes to be by her bedside - but he's not alone. The entire Shang-Young clan has convened from all corners of the globe to stake claim on their matriarch's massive fortune. With each family member vying to inherit Tyersall Park - a trophy estate on 64 prime acres in the heart of Singapore - Nicholas' childhood home turns into a hotbed of speculation and sabotage.

As her relatives fight over heirlooms, Astrid Leong is at the center of her own storm, desperately in love with her old sweetheart, Charlie Wu, but tormented by her ex-husband - a man hell-bent on destroying Astrid's reputation and relationship.

A sweeping novel that takes us from the elegantly appointed mansions of Manila to the secluded private islands in the Sulu Sea, from a kidnapping at Hong Kong's most elite private school to a surprise marriage proposal at an Indian palace caught on camera by the telephoto lenses of paparazzi, Kevin Kwan's hilarious, gloriously wicked new novel reveals the long-buried secrets of Asia's most privileged families and their rich people problems.

Would you consider the audio edition of Rich People Problems to be better than the print version?

The only extreme reaction to the whole series was sheer disbelief of that degree of wealth - that by the end billions were so meaningless, designer brands so cheapened and family dynasties more important than love or achievement. That said the whole series was so fun - to hear how the elite few live, spend their money, to dream of weeks in Paris while haute couture dresses are made and to salivate over their meals.

It really irks me when narrators mispronounce names. She should learn that the George V is not George 5 but George Cinq. And Nessun Dorma tune is not as she screamed.

Not as good as the first

Too much time on less than endearing characters. But vivid and descriptive like the first one.

Cheesy and Funny and the PERFECT Summer Book!

I've read all of Kevin Kwan's books, and this one is as equally funny and entertaining as the first two. Of course, they're all kind of silly but entertaining nonetheless. (I see many parallels between the book and my real life as an Asian American woman!) The narrator really brings the story to life.

Had a hard time to finish it

struggle to finish it, it is a shallow book. dont like the narrator's tone,especially she tries to imitate Chinese or Singapore ladies

Couldn't put it down!

I finished this book in a week! the grandmother is petty in a way that I live for! the story doesn't go where you think it will. And the narrator does a great job of distinguishing the many, many characters.

I highly recommend this book!!!

Kwan does it again!

The next installment in a great story of family, culture, and traditions often unknown to the Western world. Kevin Kwan does a great job of weaving so many individuals' stories into a great tapestry. At times it can be hard to keep up with exactly which character is being discussed but it doesn't take more than a moment or two to catch up. Lydia Look's narration does such justice to the story and her great talent for making subtle shifts in her voice helps listeners follow along on when there are often many characters in one scene. Hope this isn't the end of this family's story, looking forward to the next book from Kevin Kwan for sure!!

Liked the story, but performance was irritating

I chose this because it was supposed to be one of the funniest books of 2017. Although I enjoyed the story and smiled several times, I wouldn’t say it was laugh-out-loud funny.

However I very much enjoyed learning about a culture and part of the world with which I was unfamiliar.

Although there were a lot of characters, the author did a good job of reminding us of who was who, so I could follow the plot and character development. Perhaps the ending was a bit too pat and happily ever after, but that didn’t bother me.

What did bother me was the inexplicable performance of conversations. The first time it happened, I thought it was a misread, but the problem was pervasive and hindered my appreciation of the story.

Lydia Look read conversation like I’ve never experienced. She treated the commas as periods. Instead of:
“The sky is blue,” she said with a smile.
“I love the clouds,” he agreed with a nod.

We had no idea who said “I loved the clouds.” Was it a continuing comment from her or did he say it?

When long conversations took place, I actually was often bewildered by exactly who was speaking.

This was a huge negative for me and significantly marred my enjoyment of the book.

What made the experience of listening to Rich People Problems the most enjoyable?

This does not disappoint as a follow up to Crazy: Kwan is the Dominick Dunne of Asia. Millionaires are now just incidental to be important Billions are a must!!! Looking forward to the film adaptation - so much fun!!!

What was one of the most memorable moments of Rich People Problems?

Have you listened to any of Lydia Look’s other performances before? How does this one compare?

Who was the most memorable character of Rich People Problems and why?

Kitty - she is the other Mrs Grenville!

I thoroughly enjoyed the story telling of this series of books--funny, light and entertaining summer read. I must say, however, there were many cringeworthy moments when the narrator mispronounced names and words. This is an easy fix with some Google research. This totally bugged me.

super fun read whith a great story line. This is a book thats a great listen and always happy to pick up again once you are forced to put it down.

The story is quite predictable and a bit too shallow at times but the speaker is absolutely worth listening to this book! She switches from Singaporean to American to Indian accent effortlessly. It’s a joy to listen!

Nothing deep but wonderfully entertaining!

We won't ever know if the description of life beyond mega wealth is true, but it is so much fun to read about it!