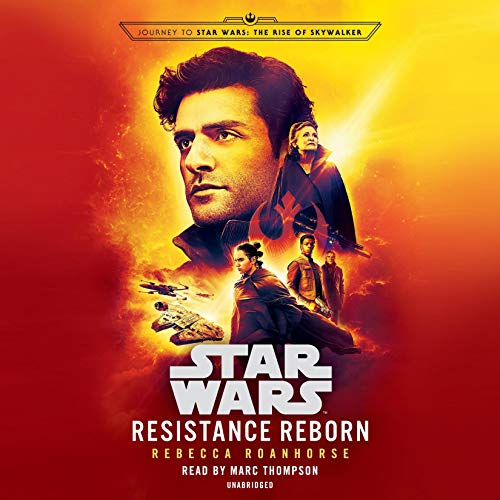 In this pivotal prequel to Star Wars: The Rise of Skywalker, the heroes of the Resistance - Poe Dameron, General Leia Organa, Rey, and Finn - must fight back from the edge of oblivion.

The Resistance is in ruins. In the wake of their harrowing escape from Crait, what was once an army has been reduced to a handful of wounded heroes. Finn, Poe, Rey, Rose, Chewbacca, Leia Organa - their names are famous among the oppressed worlds they fight to liberate. But names can only get you so far, and Leia’s last desperate call for aid has gone unanswered.

From the jungles of Ryloth to the shipyards of Corellia, the shadow of the First Order looms large, and those with the bravery to face the darkness are scattered and isolated. If hope is to survive, the Resistance must journey throughout the galaxy, seeking out more leaders - including those who, in days gone by, helped a nascent rebellion topple an empire. Battles will be fought, alliances will be forged, and the Resistance will be reborn.

"Narrator Marc Thompson draws from a seemingly bottomless well of voices to portray the many characters of the Star Wars universe.... Overall, die-hard Star Wars fans will be pleased." (AudioFile Magazine)

"This is the Avengers: Endgame of Star Wars tie-in media.” (io9)

“Resistance Reborn is an integral chapter to the Skywalker Saga.” (The Hollywood Reporter)

“A well-written adventure that'll draw you in.” (CNET)

On the cover of this story is Rey, Finn, and Poe; the three central characters of the Sequel Trilogy. Yet the story only centers around Poe. Finn shows up around the last ark but doesn’t do anything other than make you realize he lived a sheltered life in the First Order. Rey is literally a foot note in the entire book. She doesn’t do anything and doesn’t have any development.

But for those of you who enjoyed the Aftermath Series, Bloodlines, and Battlefront 2’s Inferno Squadron, you’ll be happy to note that this book either wraps up or continues the stories of those events and characters and does it rather well. Honestly they should have redone the cover to feature those characters than get my hopes up that I’d be getting an interesting story involving all 3 of the Sequel protagonists.

I was really looking forward to this book, even preordered it so I could have it first thing. I couldn't have been more disappointed. First off, it's extremely boring, just think TLJ, but slower and little too no action. Even when their was action it was so forgettable. Rey was practically invisible and the parts she was in she was more like background noise. I expected more for a book leading up to the Rise of Skywalker. Do yourself a favor and just imagine what the resistance was up to after TLJ it'll be more entertaining.

The story overall is lackluster. The ending is bad. I'm not sure why they felt the need to end it on such a pointless note

not worth the time. it's a very limited story. no. character development and it has limited capability of adding to the film

Not a good book

I “Hope” the rise of Skywalker not like this. Way too much fluff about party dress and creatures. Tuxedos, ties, and dresses that didn’t need to be described or even included.

What a waste of an opportunity

Just skip to chapter 24 unless you like to read yourself to sleep. Waiting waiting waiting for a lackluster ending. This is a comic book that was really REALLY drawn out. What a wasted opportunity

I liked the book a lot. There are good momemts and it sets up thimgs pretty well for Rise of Skywalker. Also, Mark Thompson is great as usual.

Marc Thompson delivered a superb story as always, but unfortunately he had to narrate such a disappointing story. The book started off promising but quickly turned into a letdown. Worse than The Last Jedi in my opinion. Marc Thompson is a fantastic narrator who captures the essence of characters better than any other narrator I've heard.

As with a lot of the recent Star Wars novels, there’s so much potential but the story simply falls flat. The character development was minimal, the story isn’t essential to the Star Wars canon, and I was left feeling dissatisfied. Poe is the focus of this book, and while it’s nice to see him get some limelight, his “development” if you want to call it that, felt pretty inauthentic. Finn seems to be around just to help move the story along, and Rey is an afterthought at best. I get the impression that the author is somewhat limited in what they’re allowed to touch on, given when the story takes place and what Disney’s plans are for the franchise.

Wonderful story of Poe, Leia, and the Resistance

Takes place a few days after TLJ. As the title states it's about the Resistance being rebuilt. Answers a lot questions that you might have after the battle of Crait. Some really cool cameos too. The one warning I give is that this story is NOT about Rey. She is in there but mainly in the background. We will have to wait to learn more about her :)