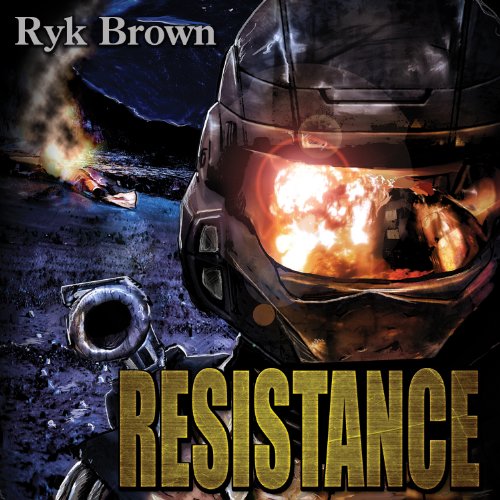 A chance to gain much needed resources... A group of highly trained, merciless soldiers... A half-completed ship on a trajectory to nowhere... A lone operative on familiar yet dangerous ground... Captain Scott and the crew of the Aurora have a chance to get everything they need to liberate their home world, but they may have to fight someone else's war first.

This is book nine in the Frontier Saga. I have enjoyed the series so far. I like to read new authors and sometimes like with Ryk Brown, I find a winner.

The last book ended in a cliff hanger. In this book, Brown covers some of the subplots from the prior books and covers each in this book. Brown covers what is happening on the Aurora and the Celestia. At the end of the last book, Lt. Commander Jessica Nash had completed a free fall entry to Earth and now we follow her exploits. The Celestia is an unfinished ship without weapons. She has been instructed to hide and wait for instructions. The Aurora is in critical need of fuel so Captain Nathan Scott attempts to find the resistance fighters on Tanna that helped two of his men escape the Jung and get back to Aurora. He is hoping they can help him find fuel. Captain Scott also needs to come up with a plan to defeat the Jung and take back Earth. The ending of this book came upon me suddenly and left me with a cliff hanger.

Brown is turning into an excellent storyteller. The characters are growing with each book and more new ones are added and some are lost. The suspense builds continuously and the story is action packed. The jump drive continues to work and has saved them many times. The crew is now made up of people from several different worlds and they are all working together successfully.

Jeffrey Kafer does an excellent job narrating the story. Kafer is a voiceover artist and a multi-award winning audiobook narrator.

High praise for book 9 as it delivers continued character development and an interesting storyline that moves the novels in an interesting direction. Getting to know Nathan's father was a nice touch here as well.

The Mother of all Cliffhangers

Never did wonder where, what the word "Cliffhanger" came from--til today! Resistance not only provided nonstop drama, warfare so realistic
I could see the assets display, it delivered a solid 5 star CLIFFHANGER
Ending! There was definately something for every listener! Resistance is
the 9th volume in this series and there's not been a lead brick yet. Mr. Brown, you've raised the bar on Sci-Fi and I've enjoyed every book of it. And Mr. Kafer, you've made it come alive! In audio books, you've become another Dynamic Duo, a small select group. Hesitating to pick Resistance? Don't!

Jung Are About to be Toast

Would you consider the audio edition of Resistance to be better than the print version?

As far as I can tell....Yes, absolutely. I have not purchased the print version, opting to listen to the narration. I wonder how many people who bought the print version turned around and purchased the audiobook. Out of the couple thousand printed books and the almost couple thousand audiobooks I have purchased so far, I think I have bought both versions maybe 10 times, and never contemporaneously. Seems a smidge redundant and the narrator never keeps up with my reading pace, so I end up not really hearing the narration.

What was one of the most memorable moments of Resistance?

When Jessica turns that pick up driving pervert's nutsack into jelly with a well placed boot kick. I saw it coming as soon as she started down that road back on Earth. That reprobate dirt farmer should have known as soon as he saw Jessica - a woman I have obviously never met, as I am real and she is not - that she could kick his ass and twist his head off without breaking a sweat. From what I have heard so far in this series Jessica is one of those firm femme fatales that can make a man think he holds the reins, only to end up securely spread eagled on some table in her basement with a rubber ball in his mouth and Jessica standing there about to begin her version of education through total submission.

If I just read the book, I wouldn't know what I am missing, as I wouldn't hear his narration.

I don't remember crying, as I am a rather jaded pessimist these days. To get the tears flowing Mr. Brown would have to step up his game several notches and create more potential heart wrenching situations.

A quick note to the author: In the first book of this series less than 10 minutes from the beginning you had Nathan drilling Jessica in the closet during some party. I thought, "Allo Allo! Might this series have that special combination of techno-matic bowel loosening action AND a bunch of scenes when Nathan grabs Jessica or Cameron or maybe both at once and throws her / them on the dead captain's king sized waterbed and proceeds to pound like a pornstar? Could there finally be a series where three mid-twenties nubile, single humans find themselves in command of a kick ass spaceship and proceed to corpse up all Jung and other space scum who get in their way AND follow along as Jessica and Cameron, all dialed up after screwing their captain back to the stone age, get into sweaty scantily clad cat fights over who has the real skills?"

All I can say is that I am still waiting. Come on, Ryk! Throw me and hopefully other like minded listeners a bone. I am not asking for much. The possibilities are endless with your dynamic trio. Here we are - 9 books into the series, who knows how many Earth months have past, all of the grownups have been conveniently slaughtered in the first half of the first book and not even a friggin kiss, boob squeeze or unintentional gluteus grope after that quickie in the closet.

To be honest, I am bringing this subject up not for myself. I am not some freak who is always slinking around looking for lurid second-hand saturnalia. I am writing this plea to you, kind author, on behalf of Nathan and, surprisingly, Cameron. Through the wonders of audiobook telepathy these two yearning yet frustrated lovebirds have thrown me a Vulcan mind meld asking me to tell you, and I quote, "Don't deny our love. Oh, and Jessica wants a piece of the action." They can't get a whiff of action because you have heartlessly written any and all traces of a perfectly normal, healthy act, i.e. sex out of their lives. Nathan is turning into a total basket case and Cameron, poor Cameron is on the verge of sneaking out of the Aurora and opening up the air valve on her space suit.

Ryk, do you want this on your conscience? They are trying to save Earth from total destruction for Christ's sake. Show them a little respect. You have let them live, I now ask you to let them love!

I like it and I kinda need to hear it through, but it's definitely not what I was thinking. I thought it was a series based on The Expanse. It's essentially Battletrek Expanse gate or something.

I have reviewed this book before.

your help yesterday will check your text with the phone number for a few days or even weeks after the explosion Android attacker.

Another fantastic addition to this series

These books just keep getting better and better. Mr. Brown has a way of making the mundane exciting and new. I am really impressed with this series.