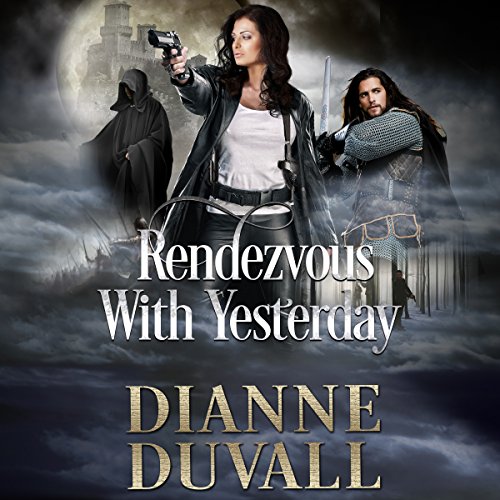 Modern-day bounty hunter Bethany Bennett helps her brother track two fugitives to a forest outside of Houston, Texas. But what should have been a routine apprehension of two bail skippers spirals out of control and ends in violence. After Beth and her brother are both seriously injured, a mysterious figure suddenly looms over her. And, when the smoke clears, Beth finds herself not only in another place, but in another time.

As Lord Robert, Earl of Fosterly, attempts to identify and track down the nameless enemy who has been plaguing his lands and people with violence, the most peculiar woman stumbles into his path. Small, vulnerable, yet possessed of a bold, fiery spirit and wicked sense of humor, she persists in dubbing Robert and his men members of something called a medieval reenactment group - until she sees his castle and labels herself mad. It seems bounty hunter Bethany Bennett has come to him from the future, bringing with her laughter and chaos, swiftly winning the hearts of his people and inspiring within him a love he thought he would never experience again. But when Robert discovers a way for her to return to her time, will the love they share be enough to keep them together?

This was a really entertaining fun book. I enjoyed it so much more than the first book in this Gifted Ones series. Loved Robert, he was amazing and real. Bethany was great too. They made a great couple, had great chemistry and a couple nicely written sex scenes. The last book was full of all sex and seemed to take over the story. This one had less and there was so much more story to it.

The story line and plot was great. I liked seeing Seth a bit more in this and reading more of Marcus' back story. The time travel portion was great. And the fact that Robert got to go the future was really good and pretty funny at times. (light switch on off on off on off) LOL

I totally recommend this book. It was really good. Fast moving, not full of filler nonsense, and there was lots of dialogue throughout the entire book. It was great.

As for the narration it was excellent. Love Kirsten Potter narrating all of Dianne Duvall's books. She does an amazing job on the men's voices. Everyone gets their own distinct voice and her reading voice is great!

i laughed outloud, i cried, i smiled, i talked t o the characters. ...this author kept me engaged in this and every story I've read by her. just delightful!

Very good addition to the series :)

This was a very good story. I liked both Bethany and Robert and enjoyed seeing how they got together. This story has been coming for a while because of Marcus (the hero from Night Reigns) being part of it and his attachment to Bethany...but, I don't think you need to read Marcus' story to understand this one, just know that there's more going on with Marcus that can be explained in the main series.

Bethany is a bounty hunter that lived in Texas in our time. She and her brother, Josh, lost both of their parents and now they're very close. Bethany has never been involved with anyone seriously and focuses on her job, her brother and her friends.

Lord Robert, Earl of Fosterly, is the brother to Dillon, the hero from [book:A Sorceress of His Own|25154251]. Robert is a good Lord to his people (in the early 1200s) and seeks only to give them a good life and protect them from any threat. Robert was married when he was young but lost his wife and child and made no effort to remarry.

Bethany is on a bounty hunter job with Josh but some things go wrong and she's hurt badly. Josh is also shot and she thinks things are going to go badly for both of them and then loses consciousness. When Bethany wakes up, her wounds are gone, leaving drying blood and scars in their place. She doesn't recognize the woods she's in and can't find Josh anywhere so she's freaked with good reason. Bethany is found by four men dressed in armor and riding horses and she's determined that they have to be reenactors that are fanatic in their attention to detail and sticking with their story. The leader of the men, Robert, tries to help her but they have problems understanding each other, 1. because they're speaking middle English vs modern English and 2. Bethany is talking about things that have no translation...like cars and cell phones and the police...

The men search for Josh but have no luck so they take Bethany back to their keep (castle). This just about tips Bethany over the edge because she's not willing to believe that she somehow traveled in time but the physical proof is mounting and impossible to ignore. It takes Bethany some time to get past her disbelief and all that but she does. It's helped by the fact that Robert has to go out to fight some mercenaries that someone has been sending on to his lands for unknown reasons. Bethany is worried for Robert and realizes that she's falling for him. Since she doesn't know how she got to the past or if she'll be sent back to the future at any time, she's a bit reluctant to get involved but after him being in danger, she also doesn't want to deny her feelings. Robert knows there's something strange about Bethany but he doesn't care, willing to accept whatever her secrets are to be with her. Her secrets end up being more than he imagined but Bethany and Robert do figure out what happened to her and how to be together so they end things with a very nice HEA together.

This was a very enjoyable story. I liked Bethany...she was a smart and realistic woman and my only complaint about her was that (IMO) it took her too long to accept time-travel (but maybe I just read too many PNR books that make me open to the unexpected). LOL. Robert was a great hero and a sweet guy. Overall, the story and characters were good and kept me engaged in the story. I'd recommend it. :)

cute funny but voice was wrong

This book may have been a bit too long for the story line. If it was shorter I would have enjoyed it more, but still it was cute and funny and held my interest. The narrator did a good job with the men but ruined the main character's voice for me.

As a fan of the immortal guardians series it was very excited for the gifted one series. And it was wonderful to finally get to hear Bethany story. I was always very sad that Marcus lost her and never really understood why he never tried to make her stay. However once Bethany and Robert meet it was obvious that Marcus was never for her. It was nice to see Robert coming into his own in the story. In “A Sorceress his own” Robert was still growing up and finding his way. It was also a lot of fun to watch Bethany come to terms with the time travel and having to live in a different century. I do feel that she ended up right where she belongs with who she belongs with. It was nice to see Marcus again and meet the rest of Bethany‘s family. It was also fun to catch up with Dillon and Alyssa.

Kirsten Potter is still one of my favorite narrators of all time. She is able to bring any world for life and give every character of their own unique voice. Is this book with a credit? My answer is YES anything by Dianne Duvall is.

Would you consider the audio edition of Rendezvous with Yesterday to be better than the print version?

I haven't read the printed version

What was one of the most memorable moments of Rendezvous with Yesterday?

Robert and Beth's chemistry was wonderful. It didn't feel forced, and didn't dance around for very long. It was a progressive build-up that felt natural.

The way she switched between Robert's and Beth's accents was smooth and only showed when the characters spoke. The rest of the time, there was not accent, so you didn't feel like she was favoring one character's thoughts over the other.

It is definitely a roman novel with some action packed moments. For someone who wants the romance but doesn't want it the only plot, this book was wonderful.

I love Dianne Duvall. I love Immortal Guardians and for crossover reasons *redacted to prevent spoilers* I had to listen to this book. And today was just the day!
This is the story that Bethany travels back in time and finds and falls in love with the Earl of Fosterly and she finds herself trying to decide what is the best choice. Stay in the past or go back to the future.
It was an interesting twist on time travel with a believable heroine and hero who you easily grow to care for. The cast of characters are easy to understand.
It’s made known that they are speaking in old English but they don’t do it. It’s like if people are speaking French and we know they are speaking French but it’s translated to English on the page?
Kirsten Potter is AMAZING. She can read the ingredients to flower less cake to me and I would listen. #winner

I had to really go back and think about Marcus's story and remember that he was in love with Bethany and she never knew it because he loved Robert as well and wanted to share in their life. It is funny that Marcus ends up with someone from a different planet after loving a woman from a different time. As always, excellent writing, amazing characters, clever dialogue, and an extensively talented narrator come together to make magic! If you like the people from 2 different worlds aspect, try the Fantasyland series by Kristen Ashley or Katie MacAlister's Dark Ones and Aisling Grey/Dragons series'

Not sure why I listened to the entire story except that I was curious to see if something more would come out. I have read many time traveling stories but this was the worst.

I've really enjoyed reading or listening to the Immortal Guardian series, but this background story of Robert and Bethany, was more of a historical romance. Bethany is transported back in time to 1203 after a serious wound. There she meets Lord Robert, falls in love. The bulk of the story is her trying to figure out she's time traveled, and falling in love with Robert. It's a dull listen if you like more to a story than just romance, because that's about all there is to it. I did enjoy the Marcus and Seth element to the story, but that wasn't enough to save this book.

loved this installment, and like the narrator increasingly with every audiobook i hear. i like how while duvall's heroines are sexy, pretty and cool and the author does seem to have a 'type' of heroine (in terms of looks) that she seldom deviates much from, they are not without (varying) flaws and feel somewhat more, well, real, than other book protagonists i have 'encountered'. they're also very likeable to me. although the male counterparts are often a little too perfect, they (especially in her gifted ones series) also seem 'real' enough, personality-wise. to me, at least. a big thumbs-up, loved pretty much every minute.