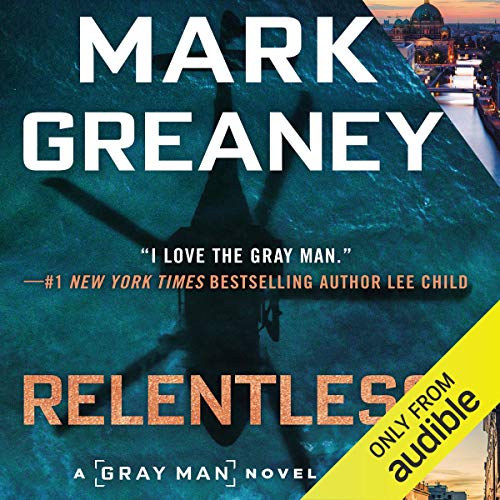 The Gray Man's search for missing intelligence agents plunges him deep into a maelstrom of trouble in the latest entry in the number-one New York Times best-selling series.

The first agent disappearance was a puzzle.

The second was a mystery.

The third was a conspiracy.

Intelligence operatives around the world are disappearing. When a missing American agent re-appears in Venezuela, Court Gentry, the Gray Man, is dispatched to bring him in, but a team of assassins has other ideas. Court escapes with his life and a vital piece of intelligence.

Meanwhile, CIA agent Zoya Zakharova is in Berlin. Her mission: to infiltrate a private intelligence firm with some alarming connections. The closer she gets to answers, the less likely she is to get out alive.

Court and Zoya are just two pieces on this international chessboard, and they're about to discover one undeniable truth - sometimes capturing a king requires sacrificing some pawns.

The title is very fitting for the tenth Gray Man book. In this book the Poison Apple team of Court, Zack and Zoya are split up. Court is recovering from an infected wound, Zack has been imprisoned after being identified with facial recognition brought to Venezuela by a rogue CIA employee. Zoya is sent undercover to Berlin where she is identified by Russians wha have a kill order on her. I’m sure you can guess that Matt Handley will not allow Court to completely recover before calling him into service to complete Zack’s mission which he does. He does and then without permission he too heads off for Berlin to make sure Zoya is safe. Of course she’s in trouble and Court makes a last minute rescue.
Pay attention because there is more than one group of bad guys out there and they each have their own agenda which seems to involve killing at least one of the team.
This book is so packed with globe trotting action. It surely is RELENTLESS !!!!
Jay Snyder’s narration is first class.
This book has my HIGHEST RECOMMENDATION.
If you found this review helpful please indicate so.
Thank You.

Author Mark Greaney continues to impress as likely the best espionage thriller author currently living. Rather than write a review of RELENTLESS I'll simply refer the reader to the outstanding February 17, 2021 review by Shelley. Shelley is far and away the best reviewer of the mystery/thriller genre here on Audible. I've never met or communicated with her but I have listened to many books she recommended in her reviews and have never been disappointed.

I'm back after 5 months of listening to no audio books and writing no reviews as I cared for my wife of 52 years. She died two weeks ago after a five month battle with a cancer that is 100% fatal. As I grieve for my wife and struggle to begin my life without her Audible books will be a part of it. Our family, as always, will be a much larger part. Meanwhile, I have an audiobook backlog of almost 100 titles.

a ton of names

There were so many characters it was hard to keep track. It got confusing because a lot of the names were Middle Eastern Or Russian and when listening to a book you don't have the benefit of going back easily to find what character goes with what name

Damn! I finished it and now I have to wait who-knows-how-long for Book 11..

While not my favorite in the Gray Man series, this is a solid action-packed adventure. Lots of intrigue, the usual suspects plus plenty of new antagonists, with a good setup for future installments. Some nice progression in our hero’s character without changing the overall tone.

Excellent narration. I’m not particularly conversant with Russian, European, or Middle Eastern accents but I can say that I didn’t find any of them grating. Snyder’s reading conveys appropriate tension without overshadowing the story itself.

Damn again. Wish it could go on and on. I guess I’ll just have to go back to Book 1 and listen to them all over again!

I try and savor listening to my audible book but it is hard. With Jay Snyder as narrator, you can’t put the book down. He takes you along in vivid color with every word! He creates a movie in your head and you can’t stop listening until it’s finished. I am now left to wait for the next in the series. Jay makes the Gray Man come to life!

Thank you Mark Greaney for this excellent series and for continuing to select Jay Snyder as the narrator. An EXCELLENT combination!

I don’t understand why proven writers with established characters feel the need to vomit words and gush for endless hours on non action details. But here we are. Love the gray man can’t say the same fir this yawner

Restarted This WAY TOO MANY times

What has happened to the story line of one of my favorite characters. OMG. Way too complex of a story and character names confuses the story even more. Ugg. Painful trying to get on the write path and understand this story.

A great book! Even better than imagined. From the beginning until time to stand still at the end. Run Court, run!

Greaney returns to form after probably the worst book (One Minute Out) in a brilliant series with one of his best yet. Loved really everything about Relentless and am already eager to find out what happens to Hanley, Zoya, Zack and Court.

I've listen to every Gray MAN book and this was ABSOLUTELY the WORST. First and foremost, the story was dumb as S***! It was totally unbelievable in fiction or non-fiction. More disappointing was the portrial of the Gray Man. Barely able to function throughout the story, he somehow is tasked to do the impossible and succeeds in an unconvincing ways.

Very little imagination in the story. If I had not been so stupid to think it would get better and listened to the whole book, I'd definitely want a refund. Those who rate this an overall rating of 4.8 are high are something and I want some!!!!!

One of the darkest books I’ve read or listened to about the grey man. Intensely ambivalent, disillusioning but possibly a good reflection of how the world ticks these days. Amazing pace and turns. A must read & audio book!

another genius strike from author and narrator. story spins slowly up and is complicated. if you not in CIA Storys and it will be difficult to follow. some hearth part is included and the turns out not so usual but very spook usual. if you like the grey man before it's a must have

The Gray Man is one of my favorites. Narrator is one of the best I know.

Quick and dirty, my favorite pool read. And now in Berlin

It is so much fun to read this, unfortunately it goes by so quickly. I love how it keeps basically the same story fun and suspenseful.
And now in Berlin!

Snyder is simply the. best. narrator.
I find myself browsing Audible for books he performs and bought a few knowing nothing about book or author.

Greaney is a class of its own in the operator novel section. I find myself binging other stuff like Tier 1, Matthew Riker, Scot Harvath, you name it, and I like those, but each time Greaney sends a new one I simply have to admit to myself, that the others are just a somewhat weaker replacement drug, compared to the shit Greaney cooks up, which also gets better by the book.

Can't wait for the next one. I hope they don't fuck up the Netflix adaption.