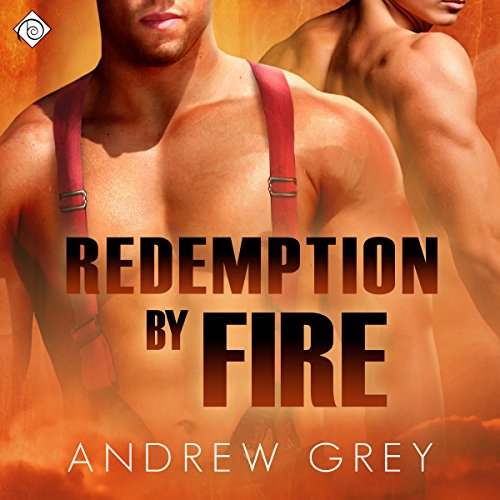 Dirk Krause is an asshole of the first degree. His life is a hell of his own making, and he makes everyone around him just as miserable. When he's injured on the job while fighting a fire, he's nearly unbearable to the hospital staff, and of course no one from his unit cares enough to visit.

Lee Stockton is the new guy at the station, so he gets saddled with the job of bringing Dirk a sympathy bouquet from the guys at the firehouse. To Dirk's surprise, Lee sees through him like a pane of glass and doesn't take any of his crap. Lee's determined to get Dirk to stop being a dick just to push everyone away. When their fighting turns to f--king, will the fireworks shine brightly on a possible relationship or leave them with nothing but ashes?

Great start to a fun series

Dirk is a big ole jerk. Nobody likes him at the firehouse and his dad thinks he’s stupid for throwing away a career in finance to be a fireman. He doesn’t really have any friends, and has never had any sort of romantic relationship. It turns out he has to sneak away to back alleys and bar bathrooms to get some lovin’, because he’s gay, and in addition to hating his career, dear old dad is a big homophobe.
Lee is the new guy who saves Dirk in a fire when Dirk rescues a baby at his own risk. Lee gives Dirk the benefit of the doubt, and when Dirk shows signs of batting for the same team as Lee, he pushes Dirk to admit his attraction.
Dirk isn’t going to change his spots so easy and is pretty much a jerk to Lee for weeks and weeks until finally Lee gives up and leaves Dirk to his own devices.
Life is lonely for Dirk and he does some soul searching and groveling and he and Lee begin a relationship. It’s not all candy and roses from there. Dirk still has quite a lot of growing to do, but the two work through their problems and when another disaster puts Lee in the line of danger, Dirk finally figures out exactly how much Lee means to him.
This first book in the By Fire series sets the ground-work for the relationship between the two lovers. Lee shows infinite patience and helps Dirk to become more worthy of his love. I really like Lee as a character – he never backs down or lets Dirk walk all over him, but he’s sweet and genuinely caring and a really good guy, just what Dirk needs.
The sexual tension is pretty hot and the ending is very satisfying, even though there are two more books to follow.
I really liked this book (and the series) and I give it 4 stars.

Audio book:
I was excited to see Peter B. Brooke as the narrator, he had done a really nice job with the Dark Horse series by Kate Sherwood, and I figured he’d do a great job here, too.
He did not disappoint. His gruff imitation of Dirk’s gravelly voice is great and his vaguely mid-western accent for the chief is a nice touch. The story takes place in Pennsylvania and I don’t know where Peter is from, but he sounds like people who grew up in the area. That added a nice layer of realism to the narration.
His narration is just enough “acting” and “background” that it made for a really nice listening experience.

I really liked it and give it 4 stars.

Overall both audio and book: 4 stars


I picked this book up because.. HELLO, firemen.. However, I was really surprised at how much I ended up liking the characters because of who they were outside of their fireman personas. They were real and I loved them.

Dirk was a jerk, but Lee was the perfect match for him and getting through his hard exterior.

It was short but there was some action with fires, some sexy scenes and the storm from hell all wrapped into it along with one character growing by leaps and bounds while the other one helped him along the path.

The narrator was nice to listen to as he brought the book to life.

I received a free copy of this book to read for Inked Rainbow Reads in exchange for an honest review.

Not only Fire can cleanse...

A good start to a series. At first, I was not sure I was going to be able to get beyond Dirk's asshattery to enjoy the story but like Dirk, Lee broke my resolve. Firefighters and finding one another...how the cast of characters play a vital role in Dirk's self-discovery and Lee's (not always) gentle approach to guide. A good story...Great narration by Peter B. Brooke and I've always been a huge fan of Andrew Grey...having all the Love...series.

The story was to short, it need a little more substance. The narrator was awesome! I love his voice changes. you definitely new when a new character was talking.

This wasn't bad and it wasn't anything special. The narrator does a great job but the story is weak. I don't know why I keep expecting anything different from an author that seems to turn stories out like McDonalds does hamburgers and they are all variations of the same story. The story is too short to really be too detail, but it is what it is and I'm a sucker for hot fireman. Not worth a credit, but maybe a sale.

Redemption by a fire

I enjoyed this book and the characters were very well written A good short read for a early night time.

Good characters. Good narration. Good listen. Try it, you'll like it. I know I did. Wish it had been longer.

Made me think of how buck and Eddie from 911 would do if they became canon. Great story I like it

The story was too short but full of emotion. The characters are very will written and overall I really enjoyed it.

Nice story, but I didn't get very involved with these characters. They seemed nice enough, but just not very interesting to me. I normally like the characters created by Andrew Grey, but these guys just felt a little less fully formed that his usual work.