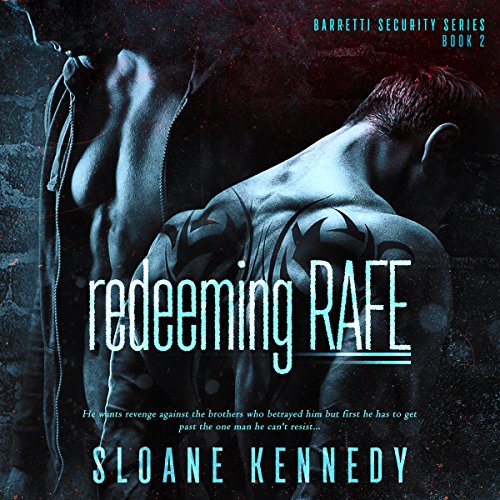 He wants revenge against the brothers who betrayed him, but first he has to get past the one man he can't resist....

At the tender age of eight, Rafe Barretti lost everything. His parents, his childhood, his innocence. And the brothers who were supposed to protect him let him go instead. Twenty years later and he's finally ready to exact his revenge by taking away everything they hold dear - their company, their reputations, their futures. But even that isn't enough - their loved ones will have to pay, too, and all their precious secrets are fair game.

Former mercenary Cade Gamble's only job is to take down the hacker stealing sensitive, private information from Barretti Security Group, and Cade is damn good at his job. But there's more at stake because the cofounders of BSG, Dom and Vin Barretti, are like family, and no one touches Cade's family. The fact that the vengeful young man turns out to be the youngest of the Barretti clan doesn't matter. But when their tumultuous encounters turn into something more, Cade will have to decide between protecting the only family he has and giving in to his need to save Rafe from himself.

Can Cade help Rafe find redemption so he can forgive the sins of the past, or will Rafe's quest for vengeance destroy them both?

Can be listened to as a stand-alone story - no cliff-hangers.

This series crosses over with some of my other series, so for the most enjoyment, they should be listened to in order, but it is not required.

Read the book a while back and continued to fall in love with the series. Cade and Rafe find each other when Rafe tries to destroy the family he believes betrayed him as a child. Their attraction is intense and immediate. Sloane knocks it out of the park every time and I loved revisiting the Barretti series. Pauley’s narration was perfect as always.

Sloane Kennedy’s work is phenomenal - having Michael Pauley bring it to life just makes it so much more incredible! Definitely worth listening to!

Great book. Great Audio.
The story between these two is steamy as well as emotionally heartbreaking. Rafe Barretti comes back into his Brothers Dom, Vin, and Ren's lives after being "missing" for like 20 years. Which, ok I get, but I also don't really understand why it took so long. lol. He is now 28 and he had plenty of time over the years to come back into the picture. But him waiting to get his revenge on the brothers he thought abandoned him makes the story into what it is so I can totally appreciate how it all goes down. Cade is pretty much a stalker for most of the book following Rafe around and pushing him into a relationship. Which would make him seem like a Creeper if it wasn't for the fact that he actually makes Rafe feel safe when he knows Cade is following him. Hearing what happened to Rafe after he was taken from the family when he was 8 was hard, hurts your heart and makes you want to cry. It was worse to hear in Audio with Michael Pauley's emotional narration, than it was when I originally read it on page. Michael Pauley does a great job portraying these two Characters in this audiobook and while it didn't move me as much as listening to Dom & Logan's book (Logan's Need) I really liked listening to this one.

OMG!! I am so blown away with the amazing talented Michael Pauley. It definitely helps that he's narrating a book from my top M/M author!!! Seriously, if you love audiobooks and M/M reads then I HIGHLY RECOMMEND you listen to this series. This is the third audiobook I've listened to from this author and narrator where I'm left absolutely mind blown. I'm like a die hard fan of Sloane Kennedy. Her writing is a-fuckin-mazing and it just gets better and better with each book. This story is phenomenal with it's captivating INTENSITY, EMOTION, PASSION and outstanding characters!!! And to have Michael Pauley deliver all of those emotions with utter PERFECTION makes it all the more better. GAH!!! I'm already ready to download the next one.

I'm not one try write long reviews,; this story had grit, heart and great sex scenes

from beginning to end, the story and the narration held my attention. Sloane wrote a fascinating story that Michael brought to life.

I put off reading this book. I've read all the others but for some reason I couldn't read this one, until I did! it is one of THE BEST of the series. Then I had to get the audio! This is the 3rd time in 4 months I've read/listened to it. Rafe broke my heart. Cade is so special. He lets Rafe learn that not everyone will hurt him.
Michael Pauley gives life to the characters that just makes this book more special.
I recommend reading the series so you can get to know the secondary characters but IMO it's not a must as this can be a stand alone. Definitely a must for your library.

This was book 2 in the "Barretti Security series. Rafe Barretti was taken from Dom and Vin twenty years ago right after there father killed there mother after he found out that she cheated and Rafe was not his child. When bio dad showed up and took him. Gary Price was a piece of work he sold his eight year old son for gas and beer and he continued to pump him out until her overdose on heroin. Twenty years later Rafe seeking revenge on the family that he thought forgot about him by stealing info he is a hacker he was planning on using the info to hurt Vin and Dom. Former mercenary Cade Gamble's only job is to take down the hacker stealing sensitive, private information from Barretti Security Group and Cade is damn good at his job. Case is the love them and leave them type but there is something about Rafe that has him drawn to him. When Rafe decides to give up his revenge he gives Dom the info he had after telling them all the things that happened to him. While in L. A. someone tries to kill him Cafe comes to his rescue. Cade is a hot sexy male who comes from a family who didn't approve of him being gay he also had some rough teen years falling in with the wrong crowd. Turns out Rafe is the reason Vin found their other brother Ren who was held captive in the middle east. When Cade falls in love with Ren he knows that he maybe setting himself up to be hurt. When is hurt he also realized that he loves him and that he needs his family. This was a really good read it was full of emotions and tragic events Ren went from losing his mother and father to beginning used by a man he doesn't know. Cade and Ren had some really good hot sex scenes. This book was well written and well read I love the narrator Michael Pauley. I have been going back and forth between this series and "The Protectors by this author. I am looking forward to reading or listening to the next book in this series.

A true tale of redemption

Two men seek to find themselves and family while battling with feelings of unworthiness. I love how Sloan Kennedy gives her characters faults they must overcome to find love and acceptance in redemption. Will Cade say goodbye to the new family he became a part of to keep the man he loves? Will Rafe accept the past he can't change and the love of a family he thought abandoned him. As always, Kennedy puts you on a rollercoaster ride of ups and downs and you hope for a happy ending. I couldn't put the book down when I read it and I couldn't stop listening to the audio book. Hearing the words that were on the page didn't lessen their impact. Even though I'd read the story, the audio version kept me rapt in attention as I held on for dear life.