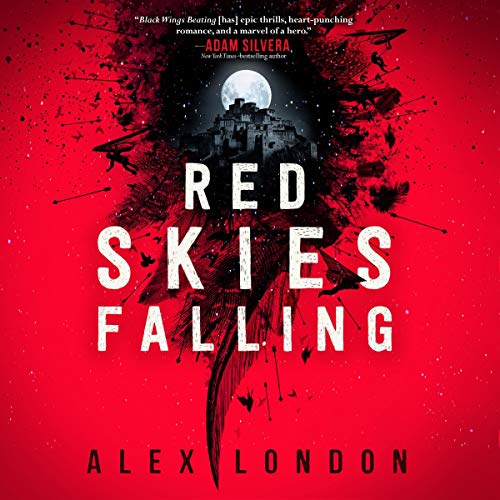 This program includes a bonus conversation with the author.

In Red Skies Falling, Alex London's thrilling sequel to Black Wings Beating, the epic fantasy Skybound Saga continues as twins Kylee and Brysen are separated by the expanse of Uztar, but are preparing for the same war - or so they think.

Kylee is ensconsed in the Sky Castle, training with Mem Uku to master the Hollow Tongue and the Ghost Eagle. But political intrigue abounds and court drama seems to seep through the castle's stones like blood from a broken feather. Meanwhile, Brysen is still in the Six Villages, preparing for an attack by the Kartami. The Villages have become Uztar's first line of defense, and refugees are flooding in from the plains. But their arrival lays bare the villagers' darkest instincts. As Brysen navigates the growing turmoil, he must also grapple with a newfound gift, a burgeoning crush on a mysterious boy, and a shocking betrayal.

The two will meet again on the battlefield, fighting the same war from different sides. But the Ghost Eagle has its own plans.

Better then the first!

I really feel like that even though the first book was great, this book is even more fantastic! The stakes are raised even higher, the action is so hype, the drama and romance are incredible, and I can’t wait to read book three!