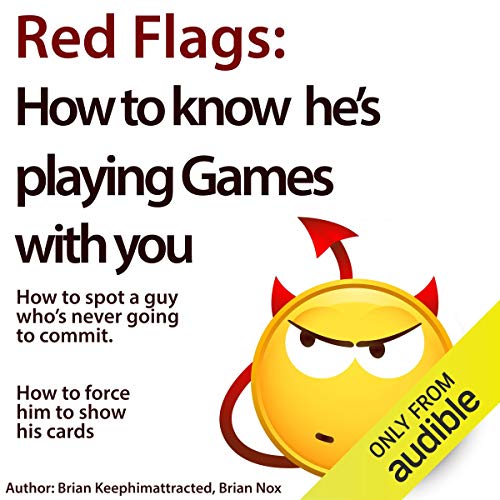 Learn secrets about men and the dishonest games they play that most women will never know.

Most women are very surprised when a man becomes distant, when they find out he wasn't as interested as he seemed, or worse, when everything he said turns out to be a blatant lie.

It's time to use the secrets of the men who "play" games with women and find out:

There are different types of men who play games with women. Not all of them are the obvious "player". That's the only type of player you can see from a mile away.

No no, there are other types of men who use under the radar manipulation techniques to keep women interested, even though they see no future with her.

Loved the information about the history of the man and his need to move around. Definitely explains some of these knuckleheads. Thanks for keeping it real.

This may be one of the best books I have ever listened to. short but so eye opening.

rite of passage. read it women. best of 15 books

amazing book you have to get it. best of 15 books I've read on the area

Back in Dating World

After many dysfunctional relationships and one failed 17 year marriage, i wanted to me take the time to get perspective of men and what makes them tick. Brian has such a way of putting things into perspective and explaining the do’s and do nots of relationships and dating. This was amazing and a huge eye opener that tells me that it is time to not settle, regain my self respect that i allowed to be tossed out. This book also help me to see that I do Not need a man, i may want one in my life but not need one.
I also just finished his book
F_CK HIM
Another great one. I will listen to both of them again and look forward to reading more of Brian’s great insight!

short and sweet. a lot of useful information packed into a short period. Reader was good and information was thorough and to the point

I guess my biggest problem was that I never gave myself the value I deserve.

Very informative. I enjoyed listening to this. I needed to hear this especially during this rough time in my life. Now I can finally let go.

It is very helpful book, enjoyed reading it. I recommend it everyone who wants to improve her love life.

this is a good one. makes a lot os good points in the book. live and learn

I finished this book in one sitting while jotting down imprudent reminders. I lost myself with the toxic relationship I was in. this book validated my doubts and helped me realize it would never change until I left