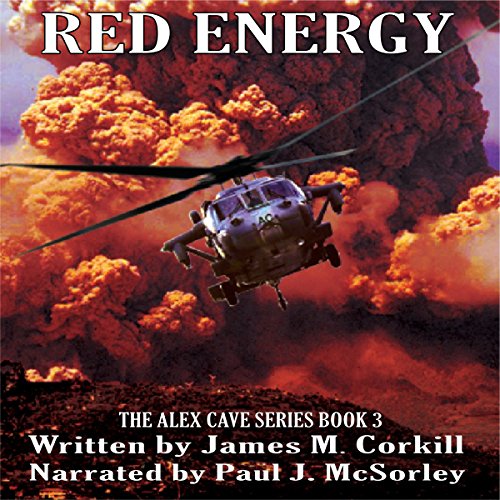 Geologist Alex Cave is trying to recover an alien artifact from the crater of a dormant volcano in the Aleutian Islands when things go horribly wrong. The device is stolen and taken to COBRA, a privately owned top-secret research facility south of Yellowstone National Park. His good friend Doctor Henry Heinz is kidnapped and forced to assist with the experiments, but their tests begin creating adverse effects throughout the park and threaten a super volcanic eruption, which will smother the Earth in a blanket of dust for a thousand years.

His wife was murdered during a mission, and Alex thought he would never find another soulmate until he meets Fala, a Native American woman living in northwest Wyoming with her 10-year old daughter, Halona. When the COBRA experiment initiates the Yellowstone eruption, Alex watches in horror as Fala and Halona are killed by the blast, sending him into a deep depression.

While in mourning, Alex is given a chance to go back in time to try to change the outcome, but there is a catch. He will not remember what he needs to do to make a difference, and if he fails, he must watch them die an even more horrific death.

And if that wasn't bad enough, the changes he made to the timeline put his own family in grave danger by an old nemesis from his days as a CIA operative, and it seems his every attempt to change the outcome only makes matters worse. He realizes his only chance of saving his loved ones is to find a way to stop the eruption before it happens. The problem will be enlisting the support of his friends without being able to tell them why they must risk their lives to help him.

Can Alex find a way to save his family and civilization from extinction?

Not quite as strong as the previous two books in the series, this is still a robust sci-fi techno thriller with a potential apocalyptic finale which plays out with the bravura of Buck Rogers in the 25th Century. Still being threatened with natural elements, this time it is seismic and volcanic activity which will end the world and does, over and over, as Alex does his own version of Groundhog Day.

Can you read this story by itself? Yes, I think the background information is sufficiently presented to make this an interesting and enjoyable read. Should you? Not if you have a chance to grab the entire set and enjoy it from the beginning. I've been listening to the AUDIO version and have had no trouble visualizing the action through the excellent and entertaining narration.

Alex Cave does it again!

Would you listen to Red Energy: Cold Energy, Part 2 again? Why?

Good book! I will probably listen to the whole series again in the future.

I don't like giving away the storyline but you think you know the ending and then it completely changes!

Paul J McSorley has done all the books in the series so far and does an excellent job. Lots of different voices to keep track of and he does it well.

You want to cheer at the end when you find out how they save the day!

Get Up Close and Personal with Alex

What made the experience of listening to Red Energy: Cold Energy, Part 2 the most enjoyable?

A true author writes in back stories within a story! I'm so grateful to get the details within this book, instead of the lazy "in-between" books the less talented are mainstreaming.

Without giving too much away, the paradox of time travel was addressed beautifully. (Until the final one, in which it seems although we went back in time, events fast forwarded or eluded us.)

I like this narrator for this series. I hope he continues with this project.

Each book peels back layers of the main characters. It also deepens the alien influence dominating the series. Each book is new and refreshing. Although this is a continuation of book 2, it gives enough background that a new reader would not be completely lost; being familiar with the series would add more value though.
Alex Cave is an incredible character. He's talented, extremely educated, and has the right friends in the right places.

Best book of the series

This has been the best book to me so far of this series. Can't wait to hear the next one that comes out! And the narration was superb, I was very impressed.

James M Corkill has created an awesome character of Alex Cave in the Cold Energy series. I found this book to pull me in even more and add background to the characters. This story is full of vivid imagery, unexpected twists, and some incredible scientific what if's about Yellowstone erupting. This book my be classified as Sci-Fi/Time Travel, which is outside my typical listening genre, I found it to be a very thrilling listen. I think that Paul J McSorely did a wonderful performance bringing the characters to life. He adds the right emotions and suspense, and has distinguishable voices for the characters. I highly recommend this book and series. I received this review copy audiobook at my request, and have voluntarily written this review. I will definitely listen to more books by this author and narrator. Without giving away spoilers, the ending of this book is great.