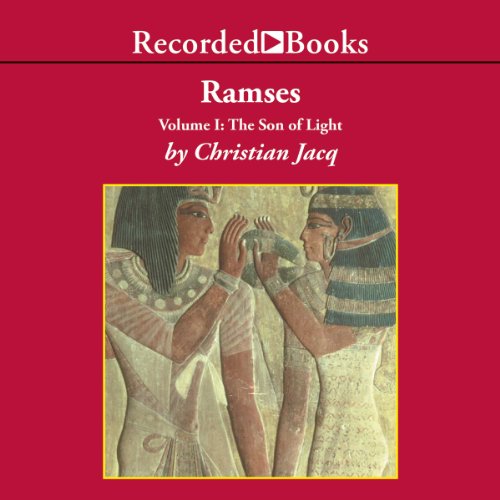 An epic re-creation of the exhilarating and mysterious time when the Sun King ruled Egypt, Ramses, the Son of Light, has become the rage in France. With over two million copies sold, it is the greatest publishing phenomenon to hit the shelves there in 20 years. Rameses is only 14 when his father, the Pharaoh Seti, begins testing his true mettle. Being the younger of two sons, the proud Ramses has a problem with being relegated to second place. Now, with increasing attention from the Pharaoh, along with the formal and military education afforded him, he dares to hope that he may inherit the empire after all. This spell-binding novel of court intrigue, treason, and romantic adventure is a rare look at Egyptian history. The entire family will enjoy the inside view of daily life and the secret rituals involved in being a pharaoh's son. Veteran narrator George Guidall's reading of this enchanting historical novel is matchless.
©1995 Editions Robert Laffont (P)1998 Recorded Books, LLC
Sagas Fiction biographique Fiction historique Mythes et légendes
Afficher plus Afficher moins

I reommend this book highly.

The boy Ramses is a cliche of perfection: the fastses swimmer, the best archer, a perfect scribe. His ethics and beliefs are modern humninatarian. In short: he is a bore. Any obstacles he encounter on his way is overcome within a page or two and even though he travels up and down the Nile the descriptions of ancient Egypt are so generel and non descript that I never felt I was there. In my oppion this is only for very forgiving hardcore fans of historical fiction with egyptian setting.

I’m listening to the audio but it doesn’t match with the book. This audio might be of another volume.

Should have read this book before high school. Why do i need to write words? 🙂

Performance is annoying with the reader trying to impersonate a woman, an old man and any other character.
Ramses makes me yawn. The perfect body, perfect lover, perfect friend, surrounded of shallow characters.
Feels like a great teenager book.

Interesting but clearly only Part 1

While the story was fairly engaging, the abruptness of the ending left me cold. I have no objection to an author writing trilogies - I often seek out multiple volume stories. But I appreciate series in which each book could, if necessary, stand on its own. This book stopped so suddenly, I could envision Christian Jacq simply reaching the magic number of words required by the publisher and barely bothered to insert a period on the last sentence before hitting the submit button. I intend to wait 6 months to see if I even still care about these characters before buying the next installment.

I love historian fiction. I love the insights you get into life in times past. The story has almost no historian context. It is basically a mundane mystery thriller told with modern dialogue. If you want a story about Ramses hanging out in a bar with Moses and a bunch of college buds, go for it!

Even George Guidall's excellent narration couldn't save it!

It was interesting to learn about the history, people and intrigue surrounding the preparation of Ramses to succeed his father as Pharaoh. However, the narration is exceedingly dull. George Guidall uses the same voice for every character, male or female, and it was very confusing to figure out who was "speaking".