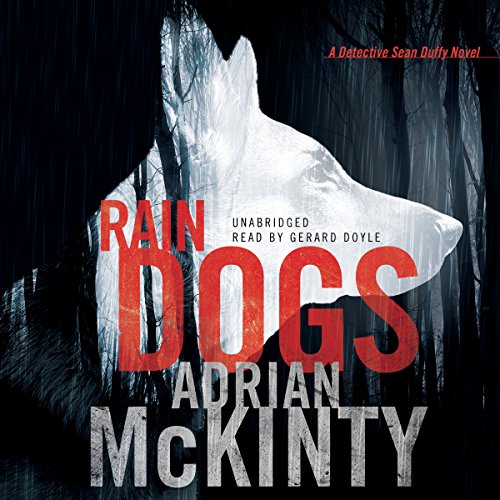 Rain Dogs, a stunning installment in the Sean Duffy thriller series, following the Edgar Award-nominated Gun Street Girl, is "another standout in a superior series" (Booklist).

It's just the same things over and again for Sean Duffy: riot duty, heartbreak, cases he can solve but never get to court. But what detective gets two locked-room mysteries in one career?

When journalist Lily Bigelow is found dead in the courtyard of Carrickfergus castle, it looks like a suicide. Yet there are a few things that bother Duffy just enough to keep the case file open, which is how he finds out that Bigelow was working on a devastating investigation of corruption and abuse at the highest levels of power in the UK and beyond. And so Duffy has two impossible problems on his desk: Who killed Lily Bigelow? And what were they trying to hide?

"McKinty expertly balances Duffy's tense and suspenseful investigation with the political tensions of the region." ( Publishers Review)
"McKinty manages a second locked-room success...another standout in a superior series, combining terrific plotting with evocative historical detail." ( Booklist)
"The tension between McKinty's competing love of tight, formal puzzles and loose, riffing dialogue is what makes the Duffy novels such a tremendous joy." ( The Guardian)

The Narrator IS the Story

Detective Sean Duffy novels are good cop stuff set in an excellent backdrop ("The Troubles" in Ireland). Rain Dogs delivers all the gritty and humorous material we have come to expect from Adrian McKinty's erudite, but seemingly feckless (he's not…it's a ruse), Detective Inspector Duffy. However, if you are this far along in the series you don't need a lecture on that…

What I want my fellow listeners to grock is that Gerard Doyle, our reader, is one of the top five narrators in the world…unbelievably enjoyable to hear in your earbuds and totally believable as he shifts characters (male or female). HIs Irish brogue, thick or thin, is classic BBC teletheater.

This series is great, although when you begin your search click on the narrator's name first to see what he has to offer. Amazing stuff!

With McKinty it's about the story!

This Detective Sean Duffy police procedural, Book 5 in the series, is set in 1987 during turbulent times in Northern Ireland. Among other things the story is about the apparent death by suicide of a journalist at a castle. If it is murder then there appears to be only on possible culprit. Duffy sets out to solve the mystery.

This novel is as much about Sean Duffy's personal life as about the murder case. In telling this compelling story McKinty almost magically weaves the case and the personal together to where they are one.

I believed that this series would end with five books. A twist at the end casts doubt on my assumption.

Rain Dogs has mystery but little action or suspense. It is a great story well told.

I VERY HIGHLY RECOMMEND Rain Dogs not just to mystery/thriller enthusiasts but to all who like a good story.

Yes, because it everything I look for when listening to an audiobook.

Doyle. He used to be a character I loved but did not like. This time out I like and love him, he has matured nicely over the past seven years in novel time.

When I read a book I give each character a voice that used to sound a lot like mine. Now it sounds like a combination of many audio actors I've heard. Doyle beats them all.

I did not weep in this one but laughed throughout. There is a lot more to the book than laughing but there are a lot of chuckles in this one.

I loved this book. Not being a writer I want to end the review there but I suppose those reading this want more. I know I would.

First of all this book is a deviation from previous books in the series. Those other books were police procedures that take place during the Troubles but our hero while trying to solve a case our hero was one player among many each with their own conflicting interests in how Duffy’s case turned out with global consequences. Duffy had to deal with America, England, his supervisors, paramilitaries, being a minority cop in a secretarial low level civil war, a messy love life, torn between doing the right thing for the victim and the right thing for his career ah he solve the case.

This novel by contrast is a much more intimate experience. It’s Duffy, Lawson, Crabby against the big mystery. As readers we are given every clue up front, there is no 11th hour shenanigans where we get new information that was never disclosed. If you are up to the challenge you can figure out why and how before Duffy. I couldn’t but if you are into that kind of thing I’m sure it adds an extra layer of enjoyment to an already enjoyable experience.

This is a mystery that takes place in the real world with real characters. Duffy isn’t omniscient or always right you see him go down blind allies, make wrong accusations, miss stuff. Leads and breaks are to come from other characters as much as they are from Duffy himself and mystery concludes the way it would in real life. No cliché shortcuts everything is earned and original this isn’t the same novel in a series that written over and over dispensed and consume like junk food.

Finally what make this novel so good are the characters. Through the characters we experience humor, action, suspense, drama, intrigue, love, loss, betrayal, heartbreak a roller coaster of emotions peppered throughout the book against the backdrop of characters try to solve and prevent a mystery from being solved. Without the characters it would be a very boring police procedure but with characters it’s a larger than life adventure that we get to go along inside Duffy’s head experiencing everything as he experiences it.

On to the narrator Doyle. If you close your eyes you can pretend you have half dozen A list actors from both sexes doing a passion project. He’s able to bring every accent for male and female to life and have it be dead on. Early on, I mean in the first five minutes he does a Muhammad Ali impersonation that I thought was awful, but went on YouTube to see how the champ sounded in 1987 and it was really good indeed. This coming from a voice actor that descended from white English and Irish parents.

I'm never disappointed with Sean Duffy. He's an ordinary cop, just trying to be diligent in his job, always seemingly to lose at love and even when his cases are solved, they seem to have a twist adding to the realism of the story. Duffy's life is lackluster, plodding away day to day, but he's dedicated to the marrow. The narration is perfect for the character putting you in the heart of Ireland.

The entire series has been a good one and this one does not disappoint. It starts a little slow but the story is another interesting and ingenious mystery with witty dialogue along the way.

Narration from Doyle is terrific as usual. Recommended along with the series.

DCI Sean with another great mystery

Would you listen to Rain Dogs again? Why?

Yes, it has all the check marks of a great story

What was one of the most memorable moments of Rain Dogs?

Which character – as performed by Gerard Doyle – was your favorite?

Yes, two times both with pride the beginning and at the end

Adrian McKinty is a masterful story teller who makes you feel the pain and pride of his characters, Look forward to his next works Soon I hope

I'm a big fan of the Sean Duffy novels. Adrian McKinty's novels set in Ireland during the 80's is a wonderful feast of police procedurals and cultural milestones.

This case opens with Muhammad Ali visiting Ireland and Duffy on riot duty to protect him from potential attack. Northern Ireland was a very violent place. Impossible to forget as Duffy is constantly looking under his car for mercury tilt bombs. Duffy is also a great fan of music. Duffy also has a rough time of it, which is pretty much a standard for Duffy.

Why only three stars for the story, then? It's a locked castle mystery involving a group of Finnish business men who have arrived to see if Northern Ireland is a good place to set up a mobile phone factory, a young female reporter, and an unexpected dead-- or was it suicide? My problem with the story is that I guessed how it was done right off. And McKinty wouldn't let it go. Too much time detailing how impossible it was. However I continued along because I love Duffy and McKinty's darkly humorous take on the Royal Ulster Constabulary.

Would you listen to Rain Dogs again? Why?

In case I missed something which I doubt I did

Sean Duffy of course. Why? Because he sounds like someone I'd want to be friends with

As always I can't stop listening when I should

Pure escapism. I live the situations

Wonderful performance, story has some weaknesses

Gerard Doyle's reading captures all the emotions of the narrator and protagonist, Sean Duffy. The juxtaposition of the ugly political situation, the riots, uglier human weaknesses of the antagonists, and the lyrical language is stunning. The real hero here is the narration, images, and metaphors. The prose has a rhythm that is poetic and the delivery honors that rhythm, and makes the prose sing in a heart-breaking cadence.
A complex and all-too-human Duffy is the perfect narrator who can analyze, deduce and grasp the deceits and violence all around him. The dialog is superb, with the slangs, jokes and black Irish humor, perfect for the dismal large and small violence that permeated Northern Ireland in the 80s, the many levels of anger, danger and frustration. And yet there is also kindness and beauty, taming Duffy's deep cynicism.
The weakness comes from loose plot lines, where the fate of a few central characters vanishes from the story. What happens to one of the Finns? The importance he earlier carries in the story becomes irrelevant by the end, and that for me was unsatisfying. Other than that I give it 5 stars, for masterful blending historical truth and fiction. Worth a listen!

“Justice must not only be done, it must be seen to be done”.

Ultimately, the book annoyed me. Not only did the detectives not ask obvious questions at the beginning, but (SPOILER) the main criminal (once tracked down) gets away with it. I’m normally OK with slow development, but not so much when it’s because the detective is being thick and the reader is being fobbed off with supposed wit instead of plot development.

Narrator has a pleasant voice and I like the accent, and he does some differentiation of voices between characters, but not a lot.

Tried this one because it was in a two for one sale. Probably won’t try another