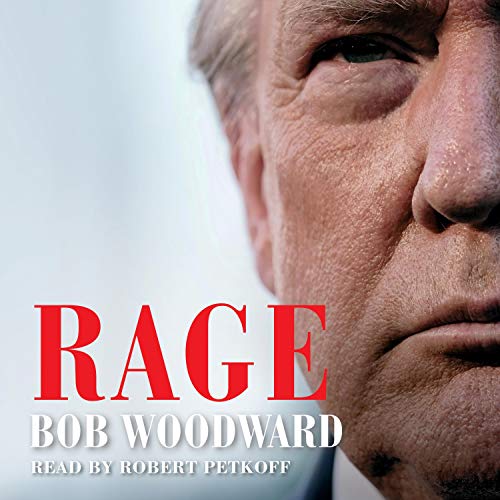 Rage is an unprecedented and intimate tour de force of new reporting on the Trump presidency facing a global pandemic, economic disaster and racial unrest.

Woodward, the number-one international bestselling author of Fear: Trump in the White House, has uncovered the precise moment the president was warned that the Covid-19 epidemic would be the biggest national security threat to his presidency. In dramatic detail, Woodward takes readers into the Oval Office as Trump’s head pops up when he is told in January 2020 that the pandemic could reach the scale of the 1918 Spanish Flu that killed 675,000 Americans.

In 17 on-the-record interviews with Woodward over seven volatile months - an utterly vivid window into Trump’s mind—the president provides a self-portrait that is part denial and part combative interchange mixed with surprising moments of doubt as he glimpses the perils in the presidency and what he calls the “dynamite behind every door".

At key decision points, Rage shows how Trump’s responses to the crises of 2020 were rooted in the instincts, habits and style he developed during his first three years as president.

Revisiting the earliest days of the Trump presidency, Rage reveals how Secretary of Defense James Mattis, Secretary of State Rex Tillerson and Director of National Intelligence Dan Coats struggled to keep the country safe as the president dismantled any semblance of collegial national security decision making.

Rage draws from hundreds of hours of interviews with firsthand witnesses as well as participants’ notes, emails, diaries, calendars and confidential documents.

Woodward obtained 25 never-seen personal letters exchanged between Trump and North Korean leader Kim Jong Un, who describes the bond between the two leaders as out of a “fantasy film".

“Trump is the first candidate for president to launch an October surprise against himself. It’s as if Nixon sent the Nixon tapes to Woodward in an envelope by FedEx.” (Nick Confessore of the New York Times)

“Woodward’s prose offers readers that delicious, vicarious sense of being an insider, right there in the room with Bob, a witness to presidential sulks and boasts.” (Rosa Brooks, Washington Post)

“Even in a news landscape where it feels like nothing is shocking anymore, the first excerpts from the new Bob Woodward book still landed like a pair of hydrogen bombs.” (Vanity Fair)

Thé last words in the epilogue is enough to explain why I worry. This critique is done after the President was positive Covid-19.

Trump is a disgrace for humanity and a terrible person. That's stating the obvious. Serial book writer Bob Woodward seems to aspire to become the John Grisham of popular politics and write as many books as possible even if he's got nothing new to share.

Narration was natural, like Bob Woodward in the room. Some interview segments were dramatic, full on salesman versus journalist. Woodward concludes Trump is dangerous threat and seems to have suppressed an early desire to come to this conclusion.

'Rage’ tells how Covid was downplayed, how Trump's methods got denounced by James Mattis, Rex Tillerson, Dan Coats, John Bolton and John Kelly, feeling he's disorganized, untrusting of his advisors, changes the subject, repeats himself to run out the clock. Featured is Trump's call with Chinese counterpart who denied visas to US health experts, after which Trump messaged corona virus not real concern, looking weak and more concerned about the hotel business. My fave was Lindsey Graham who tried steering Trump to productive directions.

Son in law Jared Kushner, described as yin to Trump's yang, said of Trump that "controversy elevates the message." Woodward suggested Bill Gates lead Covid response. For Woodward, Covid is defining issue, says presidential power expands over time. I wonder what happens if this trend continues and how presidents make money we don't know about.

Woodward does in this book what no one else could have done. He penetrates the consciousness of Donald Trump with deft questioning. He manages to remain tethered to reality and resists the urge to either turn away from Trump in disgust, or fall under his spell.

As a reader I felt myself empathizing with Mattis, Coats, Tillerson, and others who tried desperately to manage the impulsive and erratic president and the fallout from his disastrous decisions. More surprisingly, I felt empathy and even a very conflicted gratitude to Kushner and Graham who have managed to maintain trust with Trump while trying in vain to help him grow into the office.

Donald Trump is a skilled manipulator and entertainer. He can be charming and seductive, but he is tragically self absorbed. Even when an action is clearly in his self-interest, he is simply incapable of doing it. As a mother of young children, I know when something is simply beyond my child’s developmental capacity.

Donald Trump would like voters to see him as a victim. He is, but not a victim of the deep state or the liberal media. He is a victim of his own hubris. He believes he is a great leader and has nothing to learn from others. He is not a leader and making him president was a mistake. Some people may have been able to grow into the office, but he has shown himself unable to do that. This book highlights as no other book I have read that Donald Trump cannot lead. He cannot inspire anything but rage. He is the dynamite behind the door.

Few hours in. Story-telling is excellent and easy to follow while doing other tasks. Narration is exceptional.

If you read ONE book about this administration, read the one with 25% of the content in Trump's voice, his own words. Not a second-hand interpretation, no filters, but the "real" Donald Trump.

Rage is fundamentally a Q & A discussion with Bob Woodward - a talented author who has documented the administrations of 20% of America's presidents. There is commentary in the book relating to others in the Trump circle, Woodward notes - primarily details of taped conversations. The author goes to some length conveying authenticity, but there are a few elements of his observations and opinion.

Woodward is not a lightweight, and nothing in this book can be disputed. If so, where are the libel suits? Crickets chirp.

There are many books documenting the first term of Donald Trump as President of the United States, including Woodward's "Fear", Cohen's "Disloyal". Books by Mary Trump, John Bolton, Brian Stelter, more, and I've read these and more. Full disclosure: I will not and have not read anything by Sinclair talk radio hosts nor Fox News entertainment anchors. (FYI, Hannity is a dropout - Maddow has a Ph.D. in Political Science - any questions?)

That said, it is not likely a Trump devotee will read this book, and that is a tragedy. Rage reveals the real man, worts and all.

Narration by Robert Petkoff is fine, just over 13 hours of listening in audiobook format, released by Simon & Shuster on September 15, 2020.

The many people who back up these accounts and the deep reporting that is done to understand how Trump operates. It’s actually scary. Woodward does a great job providing an understanding of Trump’s methodology & psychology of his decision making process. I feel like I better understand that I keep thinking Trump is insane when he actually is very calculating which again is very disturbing. I would recommend this book.

The Cadillac of Trump Books

Having listened to way too many Trump books over the last four years (I've lost count), Woodward's style and end-result has the effect of carrying you along the twists and rubble-strewn paths of the Trump era with a vantage point of intellectual distance, rationality, and, dare I say, sanity. The book is laid out in a completely open and objective format with every claim and assertion backed by facts. He never oversteps this boundary between facts and opinion. When he does step in to offer his analysis, which he does from time-to-time (especially in his moving epilogue), he offers it as just that: his analysis. "Rage" has the added effect of making the reader a witness of sorts to history, much of which at the time of this review, was unfolding within months of the conclusion of the book's timeline. The result is a much needed perspective. In this way, Woodward offers up a kind of neutrality in an age of politics as sports. No doubt he achieves this from his decades of experience. The content itself, the narrative, has a way of creeping up on you and pulling you in, and before you know it, you've reached the end. Five stars all around. Great narration as well.

I pity Mr. Woodward, himself an institution in journalism, for having to listen to the ramblings of a moron. I hope Mr. Woodward took a few weeks off to get the shock out of his system.

I’d love to ask Mr. Woodward what he would consider worse; catching COVID or listening to Trump be his boring self repeating and repeating himself.

I’d like to give my regards for whoever had the misfortunes of transcribing Trump’s boring voice. It must have taken anything that wasn’t crystal meth to stay awake.

A very damning account of all of Trump’s inabilities to manage the responsibilities of his presidency. Worth the listen

Bob Woodward is a great writer

Bob Woodward has written many books and honesty is his best quality. When trump complains and whines like no president has ever done it’s because truth is his enemy. Great book and insight into this corrupt administration.

I felt the narrator/writer was tad bias but i loved the insight into the president. it showed his weakness but did not acknowledge any strengths.

A demanding Woodward book, because of its manifold storyline, but very revealing, due to the author's meticulous first hand interviews. The synopsis of "Fear", "Rage", and the first presidential debate in 2020 draw a compelling picture of the Trump presidency: Its (dis)functional structures, the intentions of key players, its successes and failures, and its center, an idea of the motives of the center of gravity: Donald Trump, himself.
A must, for your own conclusion: Is Trump fit for the job?

A hagiography of side characters

It's not the greatest book. Interesting in parts but it suffers from self-pontificating of the people who gave insight. I guess that is how it works. These people can portray themselves however they want and then dish about the central figure. Fact checking is fairly rare. Once the book mentions that Tillerson, different from what he said, had actually made many political contributions but I only noticed that because it stuck out. Apart from that nobody wants the job but duty or mothers leaves wives, but mostly duty, leaves them no choice. Then they are constantly fighting with their conscience and are worried. It's a bunch of angels serving the devil. The Trump stuff is entertaining, though. It's like watching a tank crushing through the foundations of US democracy.