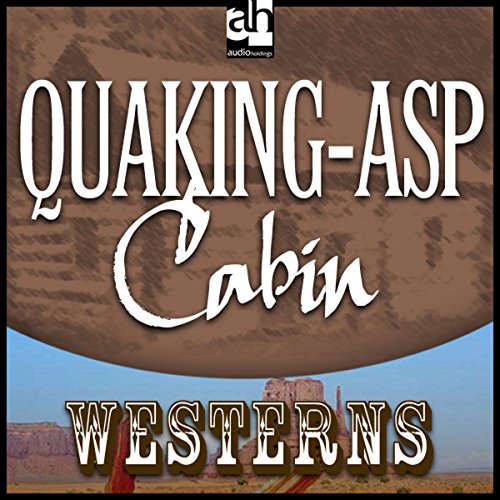 The story Quaking-Asp Cabin, by Zane Grey, the immensely popular chronicler of frontier life, is narrated by a man hunting alone on horseback for elk in an Arizona forest.

Given a richly voiced performance by Eli Davis, Grey’s story follows the narrator as his pursuit for game leads him to an abandoned cabin. After a restless night there, he learns about the cabin’s murderous history and the ghosts that seek revenge there.

Davis’ characterizations showcase his command of dialect. He performs Grey’s detailed descriptions of the natural world in a soaring, reverent voice but his tone becomes heated as the story reaches its finale.

"He looked along the brown barrels of a shotgun, into eyes that blazed murderous hate." Bullet holes and a bloody handprint mark the walls of a lonely cabin - where gambling turned ugly, men hid from the law, and a terrible ambush sparked years of cruel revenge.
©1982 Zane Gray (P)2009 Audio Holdings, LLC
Fiction
Afficher plus Afficher moins

I found this book to be a interesting. Growing up in Arizona I am familiar with the areas mentioned in Zane Grey's writings. This book brings back memories of some of the old cabins I found while hunting and hiking in Northern Arizona. Many of them are no longer standing today.