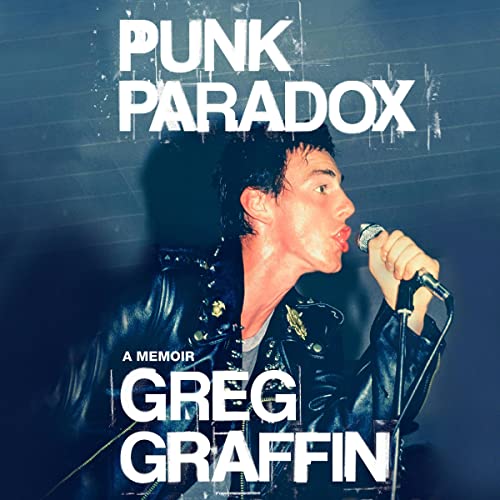 A historical memoir and cultural criticism of punk rock’s evolution, by the legendary singer-songwriter of Bad Religion

Greg Graffin is the lead vocalist and songwriter of Bad Religion, recently described as “America's most significant punk band.” Since its inception in Los Angeles in 1980, Bad Religion has produced 18 studio albums, become a long-running global touring powerhouse, and has established a durable legacy as one of the most influential punk rock bands of all time.

Punk Paradox is Graffin's life narrative before and during L.A. punk's early years, detailing his observations on the genre's explosive growth and his band's steady rise in importance. The book begins by exploring Graffin’s Midwestern roots and his life-changing move to Southern California in the mid-’70s. Swept up into the burgeoning punk scene in the exhilarating and often-violent streets of Los Angeles, Graffin and his friends formed Bad Religion, built a fanbase, and became a touring institution. All these activities took place in parallel with Graffin's never ceasing quest for intellectual enlightenment. Despite the demands of global tours, recording sessions, and dedication to songwriting, the author also balanced a budding academic career. In so doing, he managed to reconcile an improbable double-life as an iconic punk rock front man and University Lecturer in evolution.

Graffin’s unique experiences mirror the paradoxical elements that define the punk genre—the pop influence, the quest for society’s betterment, music’s unifying power—all of which are prime ingredients in its surprising endurance. Fittingly, this book argues against the traditional narrative of the popular perception of punk. As Bad Religion changed from year to year, the spirit of punk—and its sonic significance—lived on while Graffin was ever willing to challenge convention, debunk mythology, and liberate listeners from the chains of indoctrination.

As insightful as it is exciting, this thought-provoking memoir provides both a fly on the wall history of the punk scene and astute commentary on its endurance and evolution.

"SOMETIMES THE MOON AND STARS WILL CATCH YOU BY SURPRISE"

This memoir, written by Bad Religion frontman Greg Graffin, was an absolute pleasure to read.

Go ahead and buy it now. For yourself or as a gift. It's not only for Bad Religion fans; the book will be interesting to any of us who have juggled multiple identities while trying to remain true to ourselves.

I listened to the book on Audible. A fun little bonus: Greg himself narrates the first and final chapter.

"IN SO MANY WAYS WE SHOW OUR PAIN IN UNISON"
Greg walks us through his childhood in Wisconsin. His dad is a university professor and his mom a university administrator. The “broken home” he endured and the racism he witnessed. His academic family culture, his early musical influences, and his move out west.

“NAVIGATING A SPRAWL WITHOUT END"
In the Los Angeles suburbs, Greg doesn't exactly fit in. After some typical teenage heartbreak, he dyes his hair and "goes punk." He forms a band with some local friends, and, in his father's academic tradition, aims to write deep and thoughtful lyrics, inspired by the writing and anti-establishment (punk?) ethos of Charles Darwin. Greg doesn't drink, doesn't do drugs, doesn't like conflict; he doesn't at all fit the punk stereotype of his time.

"YOU'RE ONLY AS ELEGANT AS YOUR ACTIONS LET YOU BE"
Greg goes on to describe the decades of songwriting, recording albums, touring worldwide, and more, all the while tending to (and at times neglecting) his academic life and personal life. Studying early vertebrates as he worked towards his PhD and headlining stadium shows in Germany. Balancing the peer-accepted DIY punk mentality and signing a four-record deal with the world's largest record label. Coping with changes in popular culture and the meteoric rise of poppy and (at times) vapid punk music.

"WHAT WAS ONCE IS REDUCED TO REMEMBRANCE"
Greg does a nice job of neatly summarizing his 58 years. His storytelling is great and, as expected, his writing is rich and poetic at times.

Overall, in the legacy and tradition of Bad Religion lyrics, the book is educational, thought-provoking, and inspiring.

With Greg’s writing, I felt like I was with him the whole time. If you’re a fan of origin stories, check this out!

Brought back so many memories of great shows and good times. I really loved the chronological description of the band and Greg’s journey.
Highly recommended.

An interesting look at it influential band. Worth the listen, both for his intellectual assessment, and the history of bad religion.

I am a huge bad religion fan and it was an amazing story and very well written.

Dr. Graffin's life reads like a case study supplement to a Malcom Gladwell book. Definitely made my daily commute entertaining and educational! It was kool to directly correlate Greg's lyrics to his educational journey.

If you love Bad Religion or Greg's lyrics, you gotta read this. It's a great book in every aspect - it's a very inspiring story. Also, the narrator does an excellent job.

Very interesting book about part of my favorite bands history

I usually listen to books as I fall asleep. This book kept me up because I thought it was so interesting. It had me reflecting on my own journey of being a “punk”. How I came to start listening to BR and how I have evolved from a young punker to an adult who still loves the genre but as he puts it in the book, not doing very punk things. I just really enjoyed this book.

A Memoir of Punk

I really enjoyed this book. It made me realize just how much punk raised me and how much Bad Religion shaped my growth as an intellectual human who loves punk and also got a PhD. I feel like I went to Graffin U.

Graffin delivers! Narrator manages to not get in the way

As a devoted and near lifelong Bad Religion fan, and Graffin devotee, I was almost certainly going to like this book. And I did. My main fear was that the narrator would fail to handle Graffin’s signature vernacular or bungle delivering his unique authorial voice. But he did better than expected. If you’re a fan of Bad Religion or Dr. Graffin’s work as a scholar,
I recommend this book. If you’re not a Bad Religion fan, or Graffin admirer, it’s a decent enough memoir but may not offer much for you.

Side note: Bad Religion fans will surely note the many subtle references to BR lyrics and song concepts that deliberately emerge from the text. It’s a real treat to discover those and for them to enhance your appreciation of the songs.