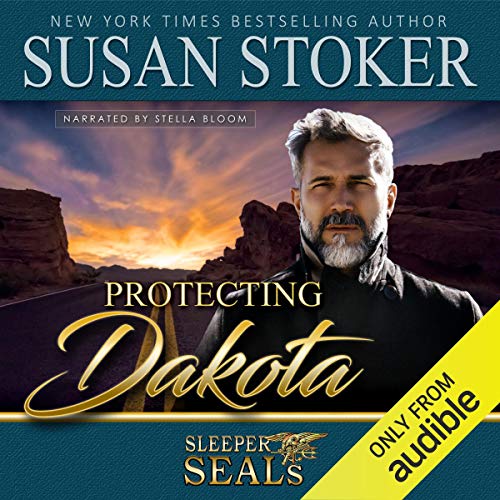 The Sleeper SEALs, are former US Navy SEALs recruited by a new CIA counter-terror division to handle solo dark ops missions to combat terrorism on US soil.

Dakota James's life has become the stuff of nightmares. The leader of the Ansar al-Shari'a terrorist group has become obsessed with her, determined to take her as his wife. On the run, she'll have to pin her hopes on the retired SEAL charged with finding and stopping Aziz Fourati before he can carry out plans to bomb more US airports.

Recently recruited to join a sleeper SEAL team tasked with fighting terrorism on US soil, Slade "Cutter" Cutsinger, with the help of some Special Forces friends, has located the one woman who can identify the deadly Ansar al-Shari'a leader. That was the easy part. Keeping her safe proves more difficult than anyone ever imagined.

When she and her new friend, Caroline, are kidnapped by the terrorist group, Dakota can only pray Cutter and the SEALs will reach them before they're taken out of the country - and away from Cutter forever.

Protecting Dakota is a part of the SEAL of Protection Series. It is also in the Sleeper SEAL connected series. Each book is a stand-alone, with no cliffhanger endings.

Each book in this multi-author branded series is a standalone novel, and the series does not have to be heard in order.

What attracted me first is the cover OH MY
Love military romance and this one was pretty good. What I liked the most is that the main characters are not 20 something, the idea that there is always a chance later in life for a HEA. Although I do believe in love at first sight, I didn't really feel like it was between them, maybe because they recognized each other from a previous life? It felt a bit too easy. But loved their interaction and it was easy to fall in love with Cutter.

Overall the story was pretty intense, when Dakota and Caroline were captured and how they were treated, and again when they finally found Dakota. What a twist when the terrorist's identity was revealed!!! But all ends well and those are my fave endings.

My first listen from Ms. Bloom, loved the voices she gave the characters, especially the male voice. But when she was voicing Dakota, the pitch was a bit on the high and made me cringe a few times, not a good feeling. If that could be toned down a bit, it would earn the 5 stars.

My favorite part of Protecting Dakota was that Dakota & Slade are my age!!! Often times the parents of the love interest are my age. Us forty something like a good love & sexy story too.
Cannot wait until book 2 in the sleeper series.

Stella Bloom amazes me. I'm not sure how she makes her voice into so many believable characters. Bravo!@!

A Plot with too many holes

Romances with hot older dudes are few and far between, especially in military romance. I couldn't wait to dig into this one. While the plot sounded intriguing, you had to decide early on whether to continue in view of the sheer implausibility (such as she sneaks out after bombing and no one notices except some unknown gov agency that taps a retired SEAL but NOT the FBI?). I stuck it out. It is unique to have older protagonists.

It was disappointing when it became a "love at first sight" thing for him falling for her pic and her falling for first sight and confessing it all immediately and then this serial bachelor is suddenly all in, and beginning and ending each sentence calling her "luv".

The writer may not have any experience with these kind of guys, which would explain how she portrays some of them. The mens' dialogue is what a woman would WANT a man to sound like. But in reality they Don't sound like that. Especially these kind of guys. There are the usual problems with strategy, tactics and practices that plague this genre sometimes, but they were minor compared to the overarching weakness in the story and the romance.

The one thing Stoker has going for her is she can tell a story, has a good sense of place, and the pacing kept it moving briskly. More research or draft readers who get the spec ops community would be beneficial.

Cutter is the man!!

Holy Smokes! I loved Susan's SEAL of Protection Series. I have missed them boys dearly and boy howdy, this one may be a new start to something new but it has the old boys in it. It was awesomesauce! And Hot! Haha

The narator on the sudio edition did a fantastic job, as always!!

Never say a man who is a little gray has been used up. Slade "Cutter" Cutsinger is just as badarsed today as he was in his younger SEAL days. When he is given a secret, off the books mission, he agrees. There is so much that could go wrong. There were things that could good. When he finds his target, a girl on the run from a terrorist, things get real.

Dakota James is a sweet, good ole girl, who just happened to be in the wrong place at the wrong time. Who knew being in the airport as a psycho sets off a bomb could lead to so much trouble. Trouble that she can not get away from alone. But she tries. This is how and where she meets Cutter.

When things get hairy and they have to bug out... that leads them back to San Diego.. and into the hands of SEALs and trouble. When the crap hits the fan the men all jump into action. Control is not something Cutter is used to balancing anymore. However, when the man in charge of the trouble gets found... oh it gets good. LIKE REALLY GOOD!!!!!

Your mission now is to read it so you can see what happens!!

You can't go wrong with this author

Susan Stoker is a great writer- suspenseful stories, real people with believable dialogue, sexy brave women that do not act like doormats or idiots and - of course- hot honorable heroes. I could not stop listening and landed up getting though this book in one day and a who-needs-sleep night. : ) I have loved all of her series and enjoy the overlap so you get glimpses into the other characters. Already waiting for the next one!

I love this book it is a great start to another series I can't wait to see how it goes.

This is the first of the newest type of SEALs, retired but still but not useless Sleeper SEALs. These men who have worked within teams in the past but can still do the job needed on their own. This is Slade aka Cutter is the first one called to this new black ops. He has been set to stop a terrorist that has set his sites on a woman who survived a bombing at the LA airport. Dakota was a school principle who caught the eye of evil. When she and a new friend were kidnapped he finds out that he was not alone on this mission. Once a SEAL always a SEAL. That is when time is an essence as all able men are racing against time and the enemy to get the women back. And the heat of love between the two was instant. Will they get their forever love? The narration was really good.

I liked it, but it was...interesting.

Cutter was called on to handle a secret mission but he never thought he’d find his HEA when he took the office. Dakota had been hiding for months from the terrorist hunting her, but when she finally comes across the one man who can help her, her life will change forever.

I enjoyed the book and the story but there were some things that raised an eyebrow or two. Seals don’t work alone, so why were promoting single missions (and we will need reinforcements anyway) to handle these dangerous assignments? How many groups, and women can Tex keep track of as one man? How exactly did the bad guy infiltrate office? The storyline was really graphic at times that I found disturbing. It may have been integral to the story but it was a bit much for me.

This was a good story and it’ll be nice to have short stories centered around special ops work.


I always love connecting with the Seal groups, so seeing Caroline and her pose and Wolf and the guys was great.

Not much plot but lots of characters with stories

This is an introduction to a series about an older group of retired or semi-retired Navy Seals and their romantic interests. That concept is nice and it is great to be able to have more identifiable characters rehabbing knees! That said this appears to be a sequel because much is mentioned about the wives of the active seal team that assists with this off the books project. Also it is pretty far fetched in this day and age for a terrorist bombing in LAX to occur , for someone to just walk away while so myna are killed, and for the news media not to have followed up or for someone not to have gotten video or cell phone footage no matter how clever the terrorist. So the story was a stretch along with the love at first sight aspect on the heroine’e part. The hero had the advantage of a little intel to study his future mate. These people are supposed to be attractive, intelligent, desirable adults- not desperate and yet they are made to sound like after years of not finding the right person they have found their soulmates. Then there is a good group of action scenes but again a pretty implausible rescue in cold water. To top it off the narration is only fair. No dual narration and not enough of the guy point of view. Not impressed.

Susan nailed it again! I will never tire of reading her books. She keeps my attention the entire time!!