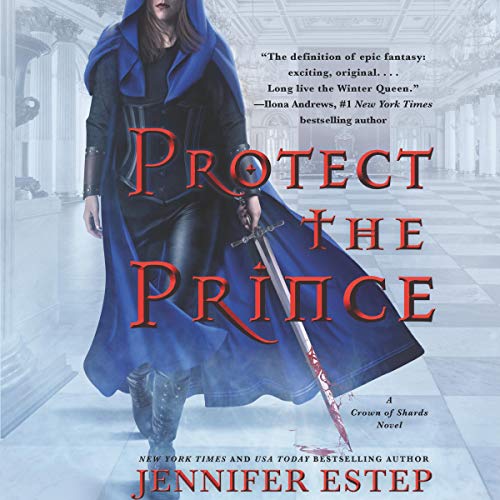 Everleigh Blair might be the new gladiator queen of Bellona, but her problems are far from over.

First, Evie has to deal with a court full of arrogant, demanding nobles, all of whom want to get their greedy hands on her crown. As if that wasn’t bad enough, an assassin tries to kill Evie in her own throne room.

Despite the dangers, Evie goes ahead with a scheduled trip to the neighboring kingdom of Andvari in order to secure a desperately needed alliance. But complicating matters is the stubborn Andvarian king who wants to punish Evie for the deaths of his countrymen during the Seven Spire massacre.

Dark forces are also at work inside the Andvarian palace, and Evie soon realizes no one is safe. Worse, her immunity to magic starts acting in strange, unexpected ways, which makes Evie wonder whether she is truly strong enough to be a winter queen.

Evie’s magic, life, and crown aren’t the only things in danger - so is her heart, thanks to Lucas Sullivan, the Andvarian king’s bastard son and Evie’s...well, Evie isn’t quite sure what Sullivan is to her.

Only one thing is certain - protecting a prince might be even harder than killing a queen....

I really like the first book of the series, but this sequel is far worse. Nothing the main character does makes any sense, and the main love interest, Sully, behaves so poorly and selfishly that I was truly hoping they wouldn't get together at all. Considering that the overarching plot is about the annoying interactions between these two, it pretty much ruins the book. Finally, (spoilers!) in the end the supposedly well trained and intelligent assassins find the main character alone and vulnerable, then proceed to stand around explaining their motives to her for HOURS instead of just killing her like they were supposed to, so that help can arrive in time to save the "winter queen." Sure. -_-

too many characters continually bemoaning the fact that true love does not conquer all.
aside from that irritation, the story and action are fine

How hard can it be to protect a prince?

REVIEW PROVIDED BY: Kelly
NUMBER OF HEARTS: 4 3/4
Protect the Prince picks up shortly after the end of Kill the Queen with Queen Everleigh Blair becoming the Queen Bellona. Becoming Queen has not been fun so far but it is what Evie had expected. The next step in Evie’s journey is to make amends with the Andvari people. Once in Andvari Evie must face off with a whole new set of problems from the Andvari Royals, a King that asks too much, an assassin who doesn’t know when to give up, and a trader who wants to take everything.

Once again I let the talented Lauren Fortgang read this book to me. Lauren did a wonderful job of bringing these characters to life for me. I look forward to listening to the next book in this series too.

Disclaimer:
I purchased this book from Audible.com and it is an honest review. This review is my own opinion and not a paid review.

So disappointing after the 1st book. The 2nd book has way to much inner monologuing is just ridiculous. The books are turning into I hate men, women do better just not a good place to be. I love strong female characters they make books so interesting but when you sacrifice good content it just doesn't make any sense.

This book has the bones of a great story, but the actual writing is clumsy.

Love d Jennifer Esteps writing, couldn’t get enough of her. 2 books into the series in Chapter 25 I had to turn it off and return the book due to unnecessary graphic sexual content. I had brushes of sexual content in two of her other series but I was enjoying this series except for theF bombs throughout. if I wanted porn I would by it. No longer a fan and will no longer buy her books. super angry because I was deep into enjoying the story line and then the main characters break away from her engagement party to his brother to engage in graphic oral sex. Not sure what happens after and now I really don’t care. These characters, this story line, and this author are dead to me.

I decided to give this sequel a chance, even though I didn’t care for the main characters, I liked the storyline, so I decided to come back for more.

As far as the main characters, I could totally adore Evie if she wasn’t so self deprecating and in love with the most immature man ever.

In the first book, “Kill the Queen” Estep makes a good attempt at world building as well as introducing a unique magical system. However her foundation is so juvenile in nature, that it’s hard to believe that the characters are adults. It’s confusing because Evie and Sullivan act like wounded children 80% of the time but then Evie will drop a glorious “F” bomb or have a sexual fantasy or kick some a** and (if you’re like me) it reminds you why you stuck with it.

In this book, “Protect the Prince”, I was so turned off by Sullivan that I wanted to scream! He’s in his early 30’s but I’m not kidding when I say that my 5 year old nephew is more mature then this guy. Sullivan stomps around like a little boy throwing tantrums and blaming everyone for being mean to him. Instead of telling him to get it together and grow the “F” up, Evie blames herself for his lot in life and his little boy tantrums. She wants to fix his boo, boos and she apologises to him every time he lashes out. It’s actually disgusting and takes away any respect I had for Evie. I had to stop listening because it just made me want to perpetually kick Sullivan in the balls.

Lauren Fortgang was ok. She had an annoying tone…I can’t explain it, but she sounded like she was reading a fairy tail to a little kid.

It had one good sex scene and some “F” bombs here and there, and when Evie acted like the strong protagonist you wanted her to be, it was doable, but otherwise, it was pretty ridiculous!

An excellent sequel with wonderfully developed strong female characters and a gripping plot that keeps you reading.

Jennifer Estep is as awesome as ever. The storyline had enough mystery and action to keep you engaged and kept you rooting for love to win. Lauren Fortgang never disappoints with her narrating either. I was sad the book was over.

Author novels is very detailed and each character is unique in their own way. I can’t wait to hear the next book.

It's insane how many times one can listen to a character whine about their bad situation while not doing something about it. The protagonist already had serious trouble with seeing obvious solutions to big and even mundane problems in the first book, but now it's just infuriating. It's so blatant to see that the marriage with the bastard prince would easily satisfy most conditions and it would even make the most ppl happy. But really the biggest problem is the whining, nobody is happy with their own situation but nobody gets the idea to...you know...CHANGE anything, no they just all accept that every rule is made in stone. If one looks at the story from that angle the antagonists in these books are much more proactive in changing their situation and that makes me respect them much more than the protagonist who whines all day long about her bad situation instead of using her power to change the situation.