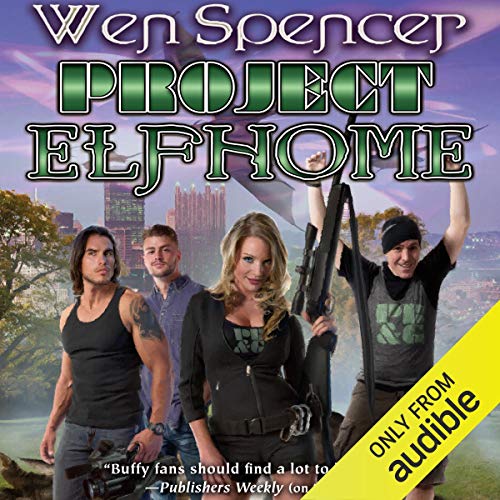 Stories exploring the fascinating realm of Elfhome, a world where modern-day Pittsburgh has collided with the kingdom of the Elves. A special entry in the best-selling Romantic Times Sapphire award-winning Elfhome series. Contains some of Wen Spencer's best shorter works, including the gems "Bare Snow Falling on Fairywood", "Pittsburgh Backyard and Garden", "Peace Offering", and more tales set in the world of best-selling Elfhome series entries: Tinker, Wolf Who Rules, Elfhome, and Wood Sprites!

Pittsburgh: a sprawling modern Earth city stranded in the heart of a virgin forest on Elfhome. Sixty thousand humans, 20,000 black-winged tengu, 10,000 elves, an unknown number of invading oni, four unborn siblings of an elf princess, three dragons, and a pair of nine-year-old geniuses.

For every story written, there's a thousand others not told. Lives interweave. Fates intersect. People change one another, often without realizing the impact they've made on others. They come together like a mosaic, little pieces creating a greater picture.

Project Elfhome tells the stories of those impacted by Tinker and Windwolf, as they struggle to make Pittsburgh a safe haven. Some of the characters are familiar: Stormsong, Pony, Blue Sky, and Lain. Others are new to listeners.

Law forages for wild plants and fish to sell to elf enclaves. A social misfit, she drives a 100-year-old Dodge, has a pet porcupine, and saves damsels in distress in her spare time. A mysterious phone call sets her on a collision course with danger, as she races to save a young female elf.

Jane Kryskill is the producer for the popular TV series Pittsburgh Backyard and Garden. She spends her days keeping her host, Hal Rogers, from getting himself killed as he takes on man-eating plants. She's not happy when the network drops famed naturalist Nigel Reid and his cameraman in her lap to film Chased by Monsters.

Olivia is 16, a runaway wife of a religious cultist, illegal immigrant, and soon-to-be mother. As Pittsburgh plunges into war, she makes a desperate bargain with the mad elf lord, Forest Moss.

As the war between the elves and the oni builds to a head, these three women struggle with their own problems, supported by a circle of unique friends, yet entangled with each other.

Loved the Concept and Execution, Even with the Loose Ends

This book is not something you should read if you've never read the series before. It relies heavily on the reader's interest in the world developed in the the three previous books. That being said, it's a really good read. It's a companion book, and it explores a lot of the world that Tinker and the rest of the crew is too busy to explain, it shows some of the writing process for Spencer, and it gives a preview of what's to come. If only it weren't so long until Harbinger is to be released. Also, the narration is solid. There isn't too much variation in terms of voice per character, but the snarkiness and strength of Spencer's characters is captured wonderfully.

Next in a fabulous series

Would you listen to Project Elfhome again? Why?

Yes. I'm totally enthralled by Spencer's characters and worlds, and I love to live through their adventures again and again. This is a compendium of stories with different characters, who are all quirky in their own ways. (Except for Wolf Who Rules, who continues to be unflappable.)

What was one of the most memorable moments of Project Elfhome?

Law and Snow versus the train full of oni warriors disguised as elves, headed for the Oktoberfest… And the first scene of the next book, Harbinger, when Tinker (otherwise not 'on camera' in this volume) gets the news about all her twins… Sorry, I couldn't stop at just one: I also loved the Pony and Stormsong backstories (especially Pony's naming, which validated a suspicion I had had about why their names are so similar), and the further adventures of Olivia and Forest Moss… and the Monster Chasing adventures of Jane the valkyrie and her crew. Non-readers will not know all the backstory and details and ramifications of these characters, but their names alone will conjure many wonderful memories for readers.I waited for this book for well over a year since the last book was published, but the audio versions of the previous 4 books kept me company in the meantime.

Have you listened to any of Tanya Eby’s other performances before? How does this one compare?

I have enjoyed Tanya's performances over and over in this series, and in another novel that I bought that she narrated. I am actually concerned for her after listening to this book, and the sample of the other book listed as narrated by her that came out this month. Unlike her other recordings, her voice in Project Elfhome is very breathy and scratchy, with little 'volume' (but all the same expression and character definition, thank goodness.) Her voice is usually very strong and vibrant. I just hope it has not been permanently impacted by over-recording, or illness. Although I badgered Audible for an audio copy of this book last month before the notice came out, If I'd known she had voice trouble, I would totally have waited for the book until she was completely well.

Three parallel worlds in collision…with elves in the middle.

I am very grateful to Wen Spencer for her imagination and work on this series, with fascinating characters in an improbable true city, Pittsburgh, stranded in another universe, and the amazing level of interconnected detail throughout the backstory (see my note above about Pony and Stormsong's names; the long versions are Galloping Storm Horse on Wind and Singing Storm of Wind; and now I know WHY) and the timing of events. This world with spaceships in a slightly futuristic Earth, world-gates to alternate Earths with Elves and bad-guy Oni, and lots of amazing smart girls (I include Stormsong in this list) with swoon-worthy Oilcan, Wind Wolf, Nigel, etc., has brought me many, many hours of repeatable listening enjoyment through Tanya's dedicated interpretation. Can't wait for the next one! (With Tanya's voice back to normal.)

This is for fans

Where does Project Elfhome rank among all the audiobooks you’ve listened to so far?

The stories fill out the world built up in Wen Spencer's other books. If you love her series you will love this book.

Wonderful ... But now I have to wait for Harbinger

I highly recommend. A must if you are already a fan of Wen Spencer and if you aren't yet a fan, this is a fun introduction to the world of Elfhome. Great quirky characters.

The opportunity to learn more about the other people of Pittsburgh whose stories, unfortunately, are not able to be included in the main novels.

Lots of laughter. These characters are great. A few tears for Boo, too.

A nice addition to the series

This book is a collection of short and longer stories about Elfhome. It fills in gaps and adds color through parallel stories from the previous books. I loved the Pittsburgh Backyard and Garden (PB&G) story. A TV show on how to deal with man-eating flora and fauna.

In a way this book is a sort of open notebook, that includes sample scenes that "never happened".

I was waiting for more in the Elfhome series and I'm pleased with this book.

About 40% of the book is from short stories that were released over the span of the first 4 Elfhome books. The rest are more stories about those characters and shorts from other points of view. Also an origin story for Pony/Galloping Storm Horse and an intro to Elfhome book 5 HARBINGER!

Excellent characterization as we've all come to expect from Wen Spencer. Also a few writing tips and insights.

Loved this edition of "Elfhome"!

Excellent narration and world building!
This edition in the Elfhome series is to give a backdrop of pivitol slices of intregal plot where the MC are not fully engaged in devising.
I am all wrapped up in the Elfhome series.
I also really like the section of where the aurhor speaks about aspects of tbe book building and creation.
Really good!

Please, please write more Elfhome books. They are wonderful, and you left it wide open for more. They are the best, funniest, adventure, fighting, relations between species, etc. 😀🖖 Brenda