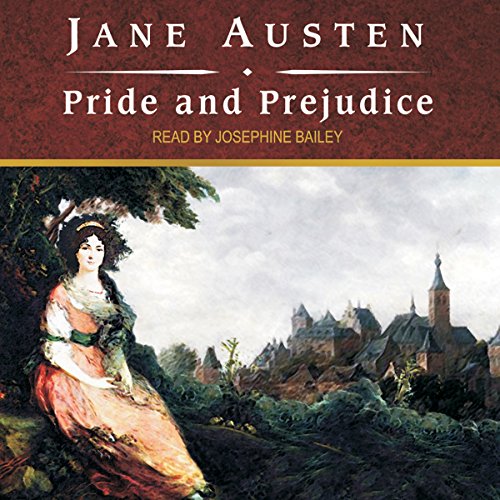 Pride and Prejudice captures the affections of class-conscious 18th-century English families with matrimonial aims and rivalries. This story of the Bennet family and the novel's two protagonists, Elizabeth Bennet and Mr. Darcy, is told with a wit that author Jane Austen feared might prove "rather too light and bright, and sparkling".

The romantic clash between the opinionated Elizabeth and her proud beau, Mr. Darcy, is a splendid performance of civilized sparring. Austen's artistry is also apparent in the delineation of the minor characters: the ill-matched Mr. and Mrs. Bennet, Charles Bingley and his sisters, and particularly the fatuous Mr. Collins, whose proposal to Elizabeth is one of the finest comic passages in English literature.

Austen's radiant wit sparkles as her characters dance a delicate quadrille of flirtation and intrigue, making this book the most superb comedy of manners of Regency England.

By now there are so many audio versions of this great book how do you choose? I picked this one and was glad of it because of the following.
1. The narrator sounded pleasing, and there was a change in voice for each character. 2. it was unabridged and the part that really made it fun, was having the e-book to read along with on occasion. I loved the movies, the book and this version of the audio book. I highly recommend it.

At last, a perfect combination of a much loved and respected classic with the finest narration performance to grace the audio world. Josephine Bailey is the quintessential narrator for each and every book I have heard. The narrator brings this story to life, with her multitude of amazing voices. Even if you already own a previous version of this, you should do yourself a favor and buy this one as well. Thank you Josephine Bailey for your Academy Award worthy performance.

I absolutely adore this narrators ability to change her voice just enough to help you identify more deeply with the characters.

I will be buying more books read by this narrator!

The book goes w/out saying. A classic must read that will not disappoint.

I love Jane Austen's stories, but could never get myself to read her books, the style of writing was just to cumbersome for me. But listening to the audiobook was very enjoyable. The narrator was great. The character voices were good. I really enjoyed this book. In fact, I just started it again today!

I enjoyed this book very much. The narrator was excellent in changing voices for dialogue. It was a fun read.

She was able to perform each character's voice. As you close your eyes, you can picture in your head how each character was talking to each other.

As you know, a classic!

Excellent story of love and feelings at that time. The BBC movie with Colin
Firth was much like this. Most of the characters thoughts or reasons for
action are given by the author and there is alot of explanation at the end.
I thought the author should tell us more of Mr. Darcy and his coming to terms
with his own faults. The movie added a little in this regard. I will listen to this
one many times.

I love this story - I love the narration! Well worth the money! If you like Jane Austen, I think you'll love this reading!

This audio is really excellent; you almost feel you are right there amongst the Bennet family. I have listened to it many many times. Recommend this to all Jane Austen fans especially, you'll love it!