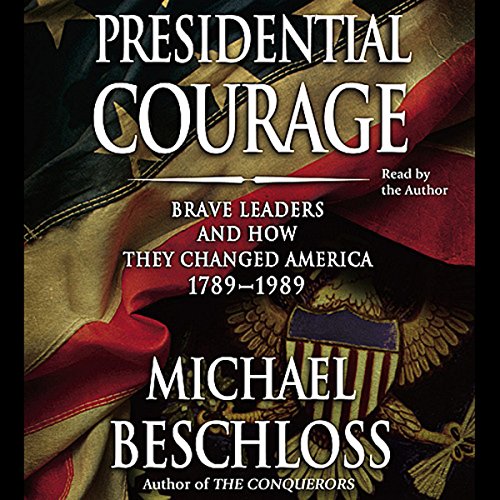 Michael Beschloss' dramatic and inspiring saga explores crucial times when courageous presidents changed the history of the United States. With surprising new sources and a dazzling command of history and human character, Beschloss brings these flawed, complex men and their wives, families, friends, and foes to life as if in a gripping novel. Never have we had a more intimate, behind-the-scenes view of presidents coping with the supreme dilemmas of their lives.

In Presidential Courage you will witness George Washington braving threats of impeachment and assassination to make peace with England; John Adams, incurring his party's "unrelenting hatred" by refusing to fight France and warning, "Great is the guilt of an unnecessary war"; Andrew Jackson, in a death struggle against the corrupt Bank of the United States; Abraham Lincoln, risking his presidency to insist that slaves be freed; and the crushing ordeals faced by Theodore and Franklin Roosevelt, Harry Truman, John F. Kennedy, and Ronald Reagan.

As Beschloss shows, none of these presidents was eager to incur ridicule, vilification, or threats of political destruction and even assassination. But in the end, each ultimately proved himself to be, in Andrew Jackson's words, "born for the storm".

The writing is choppy. The reading uninspired.

Incredibly Relevant to our times!

Michael Beschloss examines key, historic moments in the lives of George Washington, John Adams, Andrew Jackson, Abraham Lincoln, TR Roosevelt, FD Roosevelt, H. Truman, JFK, and Ronald Reagan when these men made courageous decisions, in spite of the political or personal risks, that were in the best interest of our country and world. These historic accounts reveal the strong character, and the human side, of these men in the face of the challenges presidents face. Interestingly, the challenges that these men faced, both in the domestic and foreign arenas (including polarized congresses and electorates), seem quite relevant. This book is a must read for politicians, as well as others who are interested in learning about how presidential decisions have influenced the course of American history. My only complaint is that this recording is abridged.

Would you consider the audio edition of Presidential Courage to be better than the print version?

Liked both print and audio of book.

Learning that elected officials can make hard decisions even when it's not politically wise.

His tone was easy to follow and he unfolded each story well.

Teddy Roosevelt's presidency was very interesting since he was a Republican with Democratic principles.

Since I was scheduled to lead a bookclub meeting on this book, I read the book first and then listened to the book. The actions taken by the presidents cited in the book provided great bookclub discussion. We also reviewed what other bold moves these same presidents made that were not included in the book and what other presidents during the same 200 years did that were not included. There were several general themes in the examples given in the book with the most obvious being that politics have not changed since Washington's time. Another theme that evolved was that many of the presidents did not necessarily initially support the actions they took but eventually saw that the country would benefit from the unpopular decision.

As usual, I was pleasantly pleased by another Michael Beschloss book on presidents. I especially liked the manner in which he addressed presidents, who made decisions knowing the political perils he would face. We definitely need presidents like that.

The great book I agree office with one production flaw

This was great history. Beschloss is always wonderful as both The author in the narrator. The one annoying factor was that it was poorly edited were the audio portion of the book had slight drum rolls there should’ve been chapter breaks but there weren’t in chapter brakes seem to come in the middle of episodes discussed by the author. It was quite annoying actually and stops me from giving this book 5 stars overall. Of course this would not be true for the written version of the book.

A series of thought-provoking profiles that prove our presidents are fallible humans, and that courageous actions can be borne of integrity, political expediency or both.

I like the details and unbiased account of several issues that the authored dissected. Authentic, entertaining and historically accurate.