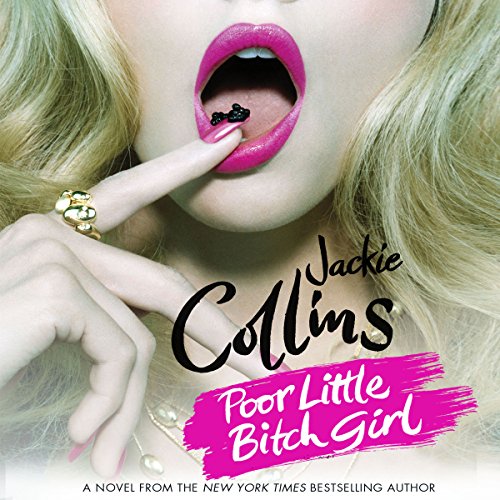 In the highly competitive market of trashy commentaries on modern American obsession with money and celebrity, there is only one best-selling queen, and that is Jackie Collins. It is precisely this victory over the marketplace that keeps many more academic people from reading her books. But there is more than one way to enjoy a book, and taking it seriously is not always the best way. Such is the case with Jackie Collins.

Everybody has an aunt that gets a little too tipsy at family get-togethers, then spews forth a bunch of shady gossip and hilariously judgmental opinions on life in America. You love your aunt for fulfilling your baser instincts so that you are not compelled to watch shameful reality television shows or daytime soap operas, or buy tabloids at the supermarket. You don’t have to agree with her, or take her seriously, but you do get a kick out of listening to her go on and on about the rich and famous. This is the beauty of listening to Poor Little Bitch Girl.

The master here is John Bedford Lloyd, who has dozens of best-seller narrations under his belt already. He sounds like the voice-over guy for every summer blockbuster film, and has enough acting credits on nighttime dramas or action flicks that he manages to sound both totally familiar to you and completely amused by the material he is reading. He voices all the male perspectives, mainly: scheming Frankie, the coked-up pimp with a famous girlfriend; gentle Bobby, the misunderstood hotspot club owner; jerky Ralph, the aging movie star; snooty Gregory, the senator plotting a re-election bid; and lowly Benito, the stereotypical Latino henchman. This cast of classic characters becomes tangled up in the lives of the three primary female characters, capably voiced by relative newcomers Allison Daugherty and Lara Himer: Denver, an up-and-coming lawyer who puts her career before her man; Carolyn, a terrifyingly naïve dreamer with a bun in the oven; and Annabelle, the poor little bitch girl herself.

Is there a plot? Certainly. It is sufficiently twisty yet satisfyingly predictable. Frankie and Annabelle are on the brink of getting busted for pandering, but can a clever agent save them? Will Bobby succeed in getting the loyal girlfriend he deserves, or will he fall prey to a selfish superstar? Ralph is poised for a major election victory, but will a surprise from his mistress ruin his chances? And who shot Ralph’s beautiful movie star wife in the face? Each character has their own angle and their own drama, intersecting sexually or violently with the others until all loose ends are neatly tied up in the epilogue.

Gleefully appearing for about 15 minutes to voice some of the minor characters is Jackie Collins herself. She gets all the choice bit parts: the ballsy Hollywood agent who keeps Annabelle out of the press, the domineering rock star who has her eye on sweet Bobby, and  fans of her previous novels will be overjoyed by this recurring character  the tough-as-nails mobstress Lucky Santangelo. All three of these ladies say outrageous things that Jackie Collins delivers as only Jackie Collins can. Watch for those tell-tale soft British “r” sounds, a severe overuse of the word “quite”, and a tendency to end many chapters with the phrase “…or will she?” When you hear how she expresses all these catty remarks, you will have no doubt that Queen Collins knows exactly how seriously you ought to take her work…or will you? Megan Volpert

Three 20-something women, one hot rich guy, two mega movie stars, and a devastating murder: Poor Little Bitch Girl has it all.

Denver Jones is a hotshot 20-something attorney working in L.A. Carolyn Henderson is personal assistant to a powerful and very married senator in Washington, with whom she is having an affair. And Annabelle Maestro - daughter of two movie stars - has carved out a career for herself in New York as the madame of choice for discerning famous men. The three of them went to high school together in Beverly Hills - and although Denver and Carolyn have kept in touch, Annabelle is out on her own with her cocaine-addicted boyfriend, Frankie.

Then there is Bobby Santangelo Stanislopolous, the Kennedyesque son of Lucky Santangelo and deceased Greek shipping billionaire Dimitri Stanislopolous. Bobby owns Mood, the hottest club in New York. Back in the day, he went to high school with Denver, Carolyn, and Annabelle. And he connected with all three of them. Frankie is his best friend.

When Annabelle's beautiful movie star mother is found shot to death in the bedroom of her Beverly Hills mansion, the five of them find themselves thrown together...and secrets from the past have a way of coming back to haunt everyone....

If you could sum up Poor Little Bitch Girl in three words, what would they be?

What was one of the most memorable moments of Poor Little Bitch Girl?

None stand out as a favorite.

It was okay, nothing write home about. I was expecting a bit more... very predictable...

I love you Jackie Collins

I love this book. Jackie Collins has a way of leaving you with confidence. This book will give you just that.

This was my first taste of Jackie Collins and I was not disappointed. There were many interlocking plot lines, which made it interesting, but I felt the ending was poorly drawn together and hasty. I have read other Jackie Collins books since reading this and many of her other novels are much better than this.

Good to catch up with some of the characters from this series. I usually recommend starting at the beginning of a series, but not necessary with this one. If you are a Jackie Collins fan, you won't be disappointed.