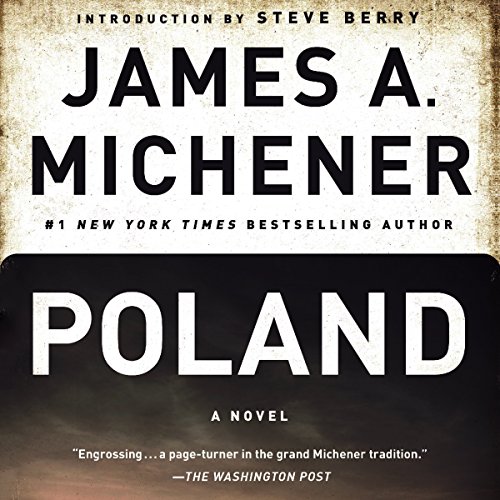 "Stunning.... An unmatched overview of Polish history.... The families themselves come very much alive, and through them, Poland itself." ( USA Today)

In this sweeping novel, James A. Michener chronicles eight tumultuous centuries as three Polish families live out their destinies. The Counts Lubonski, the petty nobles Bukowksi, and the peasants Buk are at times fiercely united, at others tragically divided. With an inspiring tradition of resistance to brutal invaders, from the barbarians to the Nazis, and a heritage of pride that burns through eras of romantic passion and courageous solidarity, their common story reaches a breathtaking culmination in the historic showdown between the ruthless Communists and rebellious farmers of the modern age. Like the heroic land that is its subject, Poland teems with vivid events, unforgettable characters, and the unfolding drama of an entire nation.

"Engrossing.... A page-turner in the grand Michener tradition." ( The Washington Post)
"A Michener epic is far more than a bedtime reader, it's an experience. Poland is a monumental effort, a magnificent guide to a better understanding of the country's tribulations." ( Chicago Tribune)

I really enjoy Michener, but this narration is horrible. He is practically monotone and almost sounds like a computer voice. I couldn't finish it.

I was very glad I listened to the book, but I found it incredibly tedious. I learned more than I expected, but longer for an emotional connection.

Ultimately I couldn't put it down but listened to it on double time. And now I want to go to Poland by way of Vienna.

loved it. the families, the stories, the timeline are so telling and had me sitting back wanting more.

So much I did not know. Poland Has endured so much injustice. While hard to hear sad events, important to realize what has happened.

I originally read this book back in the 90's. It's a magnificent read and I couldn't wait to hear the audible version after all this time. However, the performance is lacking; too mechanical and dull. The characters have no life and the store overall is presented at a single tone, Disappointed in the performance not in the store or in Michener.

One of the best historical fiction booms

This is one of Michener's finest works. It brings to life the soul of Poland and her people as no history book can. Highly recommended.

A great storyteller, Michener takes you through almost a thousand years of Polish History via the families living along the Vistula river.

The most profoundly moving book I have read in a long time. It has gained me so much more understanding of the Polish people and their culture. A pity the narrator didn't check who to pronounce Polish words like Wrocław.

Once again the author brings you into another place, another time and another well researched novel.
With that said it did take me a few extra chapters to fully get involved with the characters and the back ground, but don't give up it's a fantastic novel.
Loved this book and despite others who criticize the narration I loved it. Mitchners books are mainly historical with characters immersed through out that tell the story and facts of what the book is about.
if you have trouble with the narration dial the speed up a notch.

What an Engrossing Epic!

I am of Polish ancestry but was aware of just small bits of Poland's history. This book taught me so much and has prompted me to learn more.