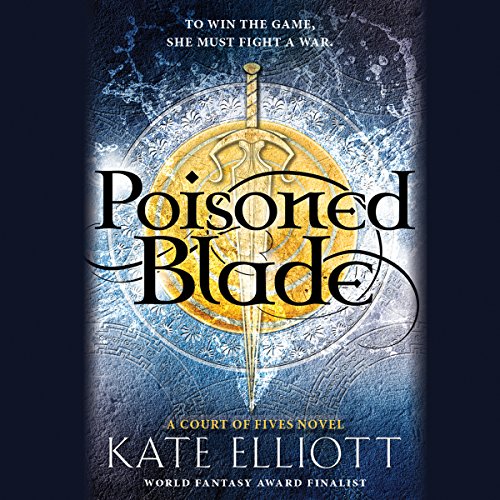 In this thrilling sequel to World Fantasy Award finalist Kate Elliott's captivating young adult debut, a girl immersed in a high-stakes competition holds the fate of a kingdom in her hands.

Now a Challenger, Jessamy is moving up the ranks of the Fives - the complex athletic contest favored by the lowliest Commoners and the loftiest Patrons alike. Pitted against far more formidable adversaries, success is Jes' only option, as her prize money is essential to keeping her hidden family alive. She leaps at the chance to tour the countryside and face more competitors, but then a fatal attack on her traveling party puts Jes at the center of the war that Lord Kalliarkos - the prince she still loves - is fighting against their country's enemies. With a sinister overlord watching her every move and Kal's life on the line, Jes must now become more than a Fives champion.... She must become a warrior.

"Fast-paced, tense, and riveting. I couldn't put it down, and you won't be able to either!" (Tamora Pierce, author of the Tortall series and the Circle of Magic series)
"Jes will remind readers of fearless Katniss with her skill and strategy for games. But it's the fascinating descriptions of traditions, royal interactions, and, of course, the intensities of the Fives that will enthrall readers most of all. Let the games continue!" ( Booklist)
"This book is amazing. Kate Elliott combines everything I love best in a YA novel. Jes is a killer protagonist, tough and capable, but also lost in her upbringing and faced with impossible choices that test her character and her beliefs.... This book will not fail you." (Gail Carriger, New York Times best-selling author of the Parasol Protectorate series and the Finishing School series)

Couldn't put it down, very entertaining and an improvement on the first book. Enjoyed the twists and turns. Still some too-cheesy moments or lazy moments of characters moving plot through unbelievable dialogue but solid fun and suspense on the whole.

Story gets even better as it goes

Became a series I did not want to put down - through to the end of the third book.

even better than book one. I'm just devouring these audiobooks. the narrator is splendid and the plot line thickens with each novel.

It took me a little bit to get back to this story but was able to fall back into the story quickly. It picks up Jess's story at the court of fives and leads you deeper into a war that is full of betrayal! I can't wait to see how this unfolds in the next book!!

this second installment shows how our characters mature and I really enjoyed how they had to face very different problems than those from the first book.
(SPOILERS!)
I have to say understand why Jesse loves both parents but I'm very frustrated with her admiration to get father. I mean the guy is a coward for abandoning her family for ambition. I really detest him and used to detest his new wife but this book made me feel a bit sorry for her (I still detest the general though). It was pleasingly surprising that her sister has a relationship with her friend and wish to see more of that! I am all for more variety and this book provides not only with a strong heroine but her sisters are interesting too. I do hope their father dies or something (why do they try to respect him still?), or that if he meets with his former wife that she never takes him back. I'm curious about the baby too, intrigued by what part will it okay in the following book. I am very glad Kal grows up in this book, I was getting annoyed at him for being upset with Jesse, I mean his dreams vs her family's life, I think the choice is very obvious. This series is interesting and would recommend for those who like history and fantasy.

This was so good! I can't wait until next year😫. I want the next book now!!!!! Athea will rise!

A well written, and well performed.

Fast paced and full of the complex issues of coming of age set to the backdrop of palace intrigue, military strife and always the cultural importance of the Fives.