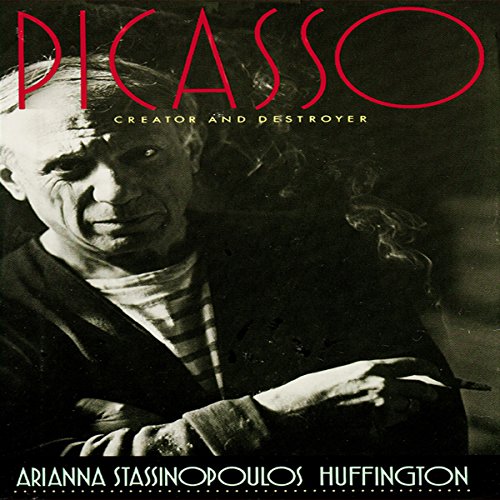 This landmark biography penetrates the barriers of legend to bring to full and intimate life a man whose burning passions - for painting, women, and ideas - were matched by a compulsion to invent reality in his life no less than in his art. Here is the tragic story of a man who, from his teenage passion for a gypsy boy to the chilling bitterness and betrayals of his old age, was unable to love and was driven to dominate and humiliate the women - and men - who fell under his hypnotic spell.

Drawing on a wealth of startling revelations, including the vivid memories of Picasso’s daughter Maya and the heretofore untold recollections of Françoise Gilot, who shared his life for ten years and bore two of his children, the author has stripped bare the romantic myths to reveal, in all its volatile complexity, Picasso’s lifelong struggle between his power to create and his compulsion to destroy.

Arianna Stassinopoulos Huffington is a writer, lecturer, broadcaster, and cofounder of the news Web site the Huffington Post. She is the author of the best-selling biography Maria Callas: The Woman Behind the Legend and The Gods of Greece. She lives in Houston, Texas, and Santa Barbara, California.

"The Picasso of Huffington’s book is a wretchedly flawed genius, sadistic and treacherous, a liar who betrayed friends and colleagues.… It is, in short, the kind of story for which gossips - and scriptwriters - would kill." ( People)
"Picasso’s prolific creativity, Huffington argues, was fueled by his brutal candor and studied indifference to people and to social convention." ( Atlantic)
"Huffington…has written an astonishing biography, a shocking portrait of a man driven by a compulsive need to destroy even as his creativity burst forth." ( Publishers Weekly)

This book is well written in that it is informative and insightful of the painter's life. However, beware that Picasso himself led the life of an over indulged child who never grew up. He was perhaps the first pop-star. I had a hard time getting through it, sort of like reading about Justin Beiber in that in retrospect of his life his actions become predictable and pathetic and his mission is not about art but only about himself. He embodied so much of what is wrong in society and much of art today. I've seen good paintings by him in person and wanted to look fairly at what he brought to the table: Seems like a net loss to me.

An exploration of Picasso’s work is the benefit.

Listening for 15 hours was enough. The man is a tiresome human being even if his paintings come from genius. His followers and his women are curious in that they suck up the abuse and stick with Picasso. It’s a classic story about the adoration of idols no matter what they do. Historical events like WWII bring interest but they do not dilute the main theme of destroyer.

This true story resulted in my online exploration of his paintings and a new appreciation for his work and for this reason I recommend the listen.

Disappointing not, as some may assume, for the conclusion of the summary, but instead for the practically singular and exhausting focus of all the preceding chapters. While fully justified and important to include, by the 4th or 5th chapter each subsequent one was just a new stick brought to the same dead horse.

The vastness of Picasso!

This is a good (beginning) inside the journey of the complex and compelling days of our lifetimes genius.
I use the word beginning, because the universe of a genius, such as Picasso, is much to vast for one ships visit to carry back the the informational cargo to civilization. So the age old adage, the more we know, the less we know! The book also seems a bit one dimensional (tree) or like Picasso's cubist paintings (four dimensional).
There were softer sides of Picasso, that missing, longed to be inside this book. Also absent, the painter, a bit more depth, to the notion of this man a a painter, and how the women, the loves, the lies, the everyday, would make way into a composition. That relationship was laking.
But, all and all, it is a book devoted to one of the most compelling and prodigious artist that the world has ever know, and for that I enjoyed this book.

Challenge of life's paradoxes and how one man resolved the unresolvable and lived and died!