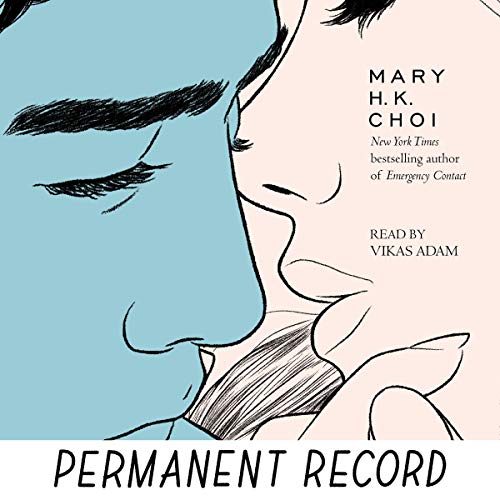 From the New York Times best-selling author of Emergency Contact, which Rainbow Rowell called “smart and funny”, comes a “captivating” (The New York Times) romance about how social media influences relationships every day.

On paper, college dropout Pablo Rind doesn’t have a whole lot going for him. His graveyard shift at a 24-hour deli in Brooklyn is a struggle. Plus, he’s up to his eyeballs in credit card debt. Never mind the state of his student loans.

Pop juggernaut Leanna Smart has enough social media followers to populate whole continents. The brand is unstoppable. She graduated from child stardom to become an international icon, and her adult life is a queasy blur of private planes, step-and-repeats, aspirational hotel rooms, and strangers screaming for her just to notice them.

When Leanna and Pablo meet at 5:00 a.m. at the bodega in the dead of winter it’s absurd to think they’d be A Thing. But as they discover who they are, who they want to be, and how to defy the deafening expectations of everyone else, Lee and Pab turn to each other. Which, of course, is when things get properly complicated.

I was drawn in right away.

this story is amazing. I was pulled in and it didn't let go. the way anxiety is described hit home but in a way that helped me find my own words. there wasn't a single chapter I didn't like

Good but hoped for something different

Definitely a good narrative. It’s been difficult to find brown boys/men in romantic settings, especially ones who grew up Muslim in some aspect(the hero is Pakistani and South Korean). If he were raised solely Muslim he’d be seen as a somewhat a “bad” one, so maybe it’s smart that he grew up interfaith( drug usage, drinking, fade to black love scenes). But I think it’s important to show people aren’t perfect and his Pakistani father was actually a dreamer, as opposed to a realistic like his mom.

This is a ya/na crossover like the author’s first book but I was more invested than the her first book. The heroine is a white presenting latinx woman so there was a lot of culture in the book.

I think where I lost connection was the attempt to appear witty but the MCs just came off as talkative.

The heroine is a celebrity—which was interesting. She couldn’t do a lot publicly which caused conflict in their friendship and eventual relationship. The hero was actually internet famous himself but never learned how to monetize it, so it didn’t last long.

They both had things that made sense and made them annoying(hero was unsure of his future but bad with money. The heroine had first world problems but could live like a regular person).

I enjoyed the book but felt it still unintentionally centered whiteness and striving toward it; brown men always love whiteness so I figured this might be different but it didn’t surprise me she was white passing.

Overall I enjoyed. Would I recommend? Only if you’re looking for this kind of story.

insta love kind of story isn’t for me but it’s Mary H.K. Choi. Unfortunately, I can’t relate to the characters, very stereotypical and at times superficial. Which lead me not liking them at all. I couldn’t connect with Pablo and Lee’s relationship. I have to say, though, Mary HK Choi is still a great writer for YA Romance but this story didn’t grab my attention and end up to be okay. Great book cover Appeal and great writing style but for me personally, the story wasn’t for me.

I raced through this just to inhale all of the words, the food and New York references. But then I started hitting the breaks when I knew it was coming. You know the thing when all the bad starts creeping in and tearing the characters apart? Look, I know how it goes, so I gathered up my courage and finished. An now I wish there was more. If you have a young or are one at heart this book should resonate. It’s not ever trying too hard to shoehorn pop-culture references just to seem like a Steve Buscemi gif red hooded and captioned hello fellow kids. It does go in on snacks and food in such a hard way that my native brooklynite heart melted when (spoiler) one of the greatest of all time groceries in Queens gets mentioned for their extra plug status in the snack game. There is so much knowledge and power that comes with Choi’s writing, if you can ride the wave, by the end you are full surfer realness, like wetsuit wearing deadass winter Rockaway Beach local in some Timbs status because I must keep this review New York to the end. Do yourself a favor and hop in a world where a grip of youths, imagine like 5 diverse Desus & Mero type personalities that are figuring out life in NY in and out of college, join the journey through the debt that comes with college and get dipped in a pop icon love story fantasy that spans intimacy issues, family, sneakers, late night munchie creations, coasts and continents in its contents.

I thought the book was good. Mary h k is becoming one of my favorite authors. She has really funny dialog. Super witty.

I thought this was going to be like a romance hybrid but it was more coming of age. I am finding out I like this genre bcz I did a lot of dumb stuff growing up and I can relate.

The only gripe I have is that I could not listen to the story without adjusting the volume. Vikas is a good narrator. When he changes characters the pitch of his voice goes higher than when he reads the storyline. He reads kind of soft anyway It would hurt my ears. Idk if that is something the audio Dept. Should smooth out or if the narrator needs to keep a constant volume.

Other than that I think it was a good book, I would imagine it was challenging to write this kind of book from the opposite sex’s point of view but I would say the author pulled it off.